Movie “Is the order a rabbit?? ~Dear My Sister~” 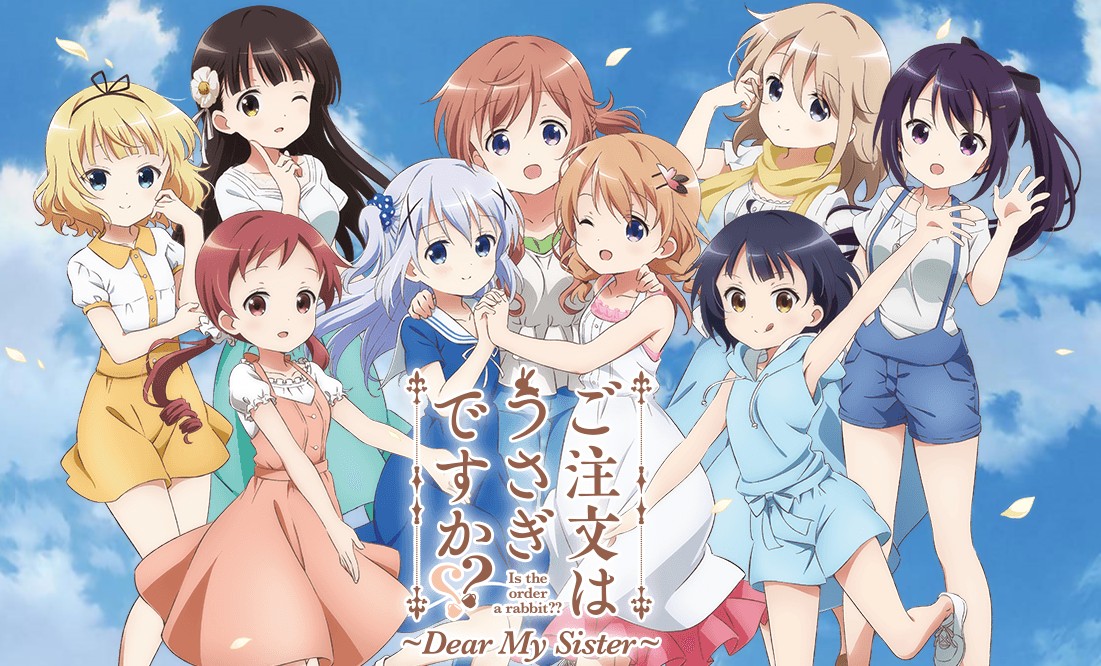 Hey guys this is Gino (@Berria_g) and I’d like to share my joy today.
This was the kind of movie we were waiting for a long time…..since the anime was great we knew that the film will also come out well and the results were obvious!!! The details were stuffed in just an hour but it didn’t came out lame at all. Now since I’m talking about the film, let me introduce a bit about the film.

| The Story and the Characters

Now from the original anime, we all know the basic characters. Kokoa, Chino, Rize, Sharo, and Chiya are the basic main characters to the anime and that hasn’t changed in the film. However, there are few characters that ‘ll show up that didn’t much show up during the anime (and I mean not at all but besides the main characters). In this film, Chino’s friends Maya and Megu also takes an important roll during the film showing their cuteness as usual. Now the main detail about the film is about “Sister” and if you’re a fan of the original anime, then you should have a hunch of what kind of meaning it holds. Now, I’m not here to tell the whole story since there may be some of you who haven’t seen the film yet but just for a sneak-peek, let me just introduce a little bit of the film. (I just can’t hold it lol) The film all starts with a seen where Cocoa is leaving the city and Rize and Chino are there to send her. However the story turns totally differently than we could imagine from there. Also you’ll get to see Moka (Cocoa’s sister) and her mother later on!! Who would of thought that coming?! Since the title speaks for it self, the film is about “sisters”, where Cocoa being in both situation, younger sister and an older sister. The film was about approximate 1 hour so its like 2 anime episodes connected. The film was more than fantastic and after the film you’ll just want to go home and reminisce the entire film.

And not only the “sisters” are great but the usual characters are also one of the great things that you’ll want to check out!! I’m personally a fan of Cocoa and Sharo and the film didn’t let me down. Sharo took an important roll herself and this could be said to the other original characters from the original anime. So if you’re a big fan of this anime, this film should be ranked high on your movie priority list!!

There isn’t much to say but to go watch the film. But if you watch the film in Japan, you’ll get a bonus item when you enter the theater. My item was Moka which was just too great for me I felt like heaven before the film started.

The anime was so popular fans were crazy everywhere about this film and even in Akihabara the heat was flaming!! Pictures Everywhere and I mean literally everywhere!!

Thank you for reading this till the end and we hope you get to watch the film and feel the same way as we did!! Don’t forget to share this on FB or Twitter which is linked on top of this page, and we’ll see you next time!!

Right now it seems like WordPress is the preferred blogging platform out there right now. (from what I’ve read) Is that what you are using on your blog?

Yes, the platform I’m using is WordPress. It is easy to use and easy to deliver.

Well I definitely enjoyed studying it. This subject provided by you is very practical for accurate planning.

Thank you fro checking out our content and we are looking forward on delivering more!

wonderful points altogether, you just gained a brand new reader. What would you suggest in regards to your post that you made a few days ago? Any positive?

Thank you for reading our articles! Recently we had an event called c94, comiket 94 so that article should be interesting to read! Thank you again for reading our contents and we are looking forward on delivering more so please stay tuned for more!