TV anime “Praore! -PRIDE OF ORANGE-” will start airing on ABEMA, TOKYO MX and other stations from October 6th (Wed)! 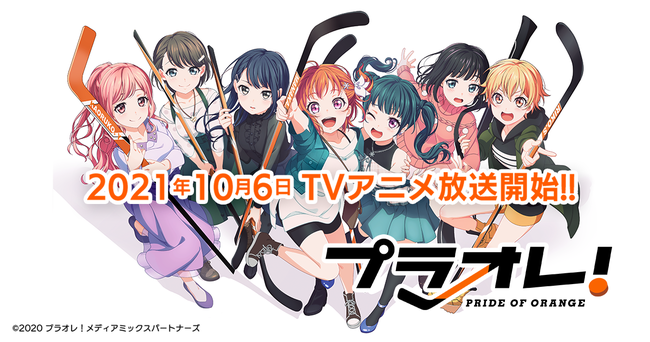 Also, “Praore! -PRIDE OF ORANGE-” will appear on stage at the “Kyoto International Manga & Anime Fair (KyoMafu) 2021,” a comprehensive trade fair for contents centered on manga and anime, scheduled to be held on September 18 (Sat.) and 19 (Sun.), 2021. 〜PRIDE OF ORANGE~” will be appearing on stage. There will be a special talk show by the voice actors, full of information about the anime and the game that will be released for the first time.

※The date, time, and content of the broadcast are subject to change without notice. Please be forewarned.

|We will be appearing on stage at the “Kyoto International Manga and Anime Fair (KyoMafu) 2021”!

Prior to the start of the anime broadcast on October 6th, the Puraore! official Twitter (@puraore) is holding a follow and retweet campaign. (@puraore) will be holding a follow and retweet campaign. Those who retweet the tweets posted on the dates associated with the numbers of the seven main characters will be entered into a drawing to win postcards autographed by the cast and 1,000 yen worth of Amazon gift certificates.

For more details and notes on the application, please see below.
https://puraore.com/news/4227

The game “Plaore! ~SMILE PRINCESS~” is under development by DMM GAMES for release in 2021!

■Media Mix Project “Praore! About
Plaore! is a large scale project that will be developed as a media mix in cooperation between CyberAgent and EXNOA, a joint venture company that operates “DMM GAMES”. The story is set in Nikko City, Tochigi Prefecture, and is about girls who spend their youth playing ice hockey.