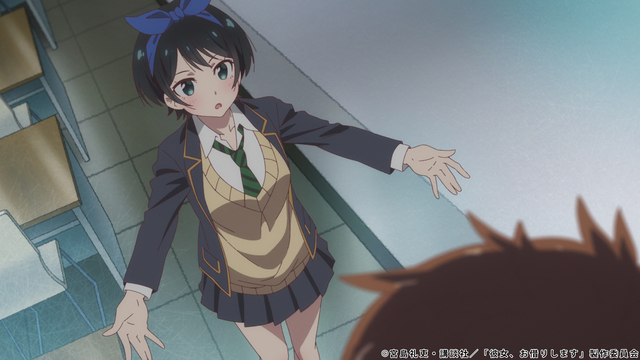 A leading cut for episode 7 for “Rent-A-Girlfriend” (a.k.a KanoKari) has been announced for 21 August.

The preview of the 7th episode “Rent-A-Girlfriend” was released on Youtube. This is a web-only version with different content from the next announcement when TV is on air, so if you’re interested, come check the video that’ll be posted here later on.

Moreover, ticket lottery applications for the “Rent-A-Girlfriend Exhibition” Tokyo venue, which will be held from October 10th.
https://l-tike.com/event/mevent/?mid=536570

This exhibition will be the first exhibition to commemorate the 3rd anniversary of the series and the animation broadcast, and will be held in Tokyo and Osaka. At the venue, there will be an exhibition as if Chizuru and others are there, and commemorative goods drawn by Dr. Miyajima will be sold, as well as sales of the products that appeared in the work.
For the latest information, check out the official Twitter page for her exhibition.

<Summary>
Kazuya was following Ruka in order not to let Chizuru be Lenkano, but he was ambushed.
While Kazuya tries to promise that he will not speak at all, Ruka reveals his secret.
The day has changed, and Kazuya is meeting with Kuribayashi at the university ── “Ah! Kazuya!”.
It was Ruka who came to see Kazuya.

Further details on what’s going to happen will perhaps be aired on the anime of 21 October.
Will Kazuya be able to keep his secret even though Ruka seems to say it out loud in public? (As she just did in the PV)

Nazuna
Don’t miss the next episode to find out the truth!!