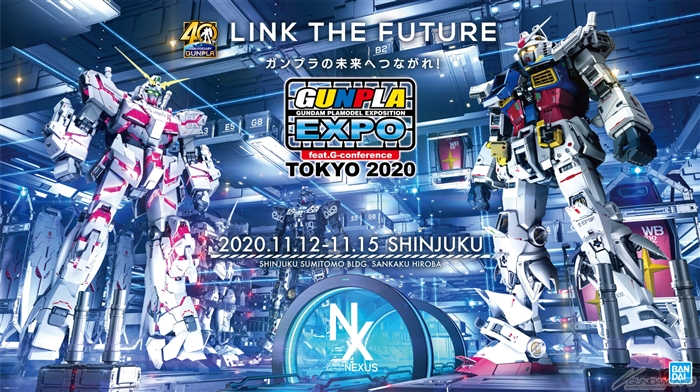 Through the past four days, there was an event for not only the locals but also for every gunpla fans from all over the world “GUNPLA EXPO TOKYO 2020“. With the countless amount of gunplas on exhibition, new gunplas announcements, and some other exciting activities, the event turned out to be a blast for the fans who have visited. Here in this article, details and summaries of the event will be written so be prepared to reminisce the great memories from the event and for those who didn’t have the chance to pay a visit to the event, no worries since the upcoming event about Gundam will be written in the end!

Since the “1/144 Gundam” that was born in 1980, 445 million units have been sold in 35 years, and the plastic model “Gundam” of the Mobile Suit Gundam series has continued to evolve.
Since its birth, Gunpla, which will celebrate its 40th anniversary in 2020, is a “snap-fit” that does not require adhesives and can be easily assembled with a click. “Multicolor molding technology” that realizes color reproduction without painting. Gunpla has been aiming for familiarity that anyone can enjoy, “you can assemble with just one nipper.” The excitement of opening the box while imagining the finished product. That immersive feeling that you can be absorbed in so much that your thoughts disappear. We are holding it all over the country, hoping that you will feel the Gunpla closer and more people will experience the joy of making it!

Nazuna
I didn’t know there was this much history in this event! I’m glad I was able to participate in celebrating its 40th anniversary!

|What exciting thigs they had at the event

Here you get to see the amazing movie where you were placed in a gunpla factory where the gunplas are built automatically right in front of you. In the final scene, you get to meet the 1/1 scaled RX-78 jumping right in front of you enhancing the excitements of the visitors making them wonder what kind of journey they’re about to start after the movie.
For the full movie, go visit the official site to experience the thrilling tour with the RX-78!

Nazuna
The opening movie really build up a great energy of excitement inside of me! Super entertaining!

Here there will be posts of all sorts of gunplas that were on exhibition. Enjoy the gallery and maybe you’ll find something cool on the way along! There’s quite a lot of images to go through so don’t get tired!!

Nazuna
All these gunplas on exhibition was such an entertaining environment! I got to see all the cool ones and the ones that are also coming out!!

This ceremony was only held on the first day before the venue was publicly opened so this might be something that you didn’t know.

At the “GUNPLA EXPO TOKYO 2020 feat. GUNDAM conference”, under the theme of “Future Gunpla Factory”, “Gundam” celebrated its 40th anniversary this year with new products, 1/1 scale beam saber and shield exhibition, and assembly experience event. There are many events related to. At the opening ceremony, Kanata Hongo, who became the 40th-anniversary build ambassador of Gunpla, Teruyuki Tsuchida, and ROLAND took the stage.

Nazuna
This was really a great opportunity to see them in person for the first time!

Now, this might be the most interesting information Gunpla fans have been waiting for. Here are some of the gunpla that is officially announced and will be on the market soon!

Mobile suit Gundam that appears in the animation “Mobile Suit Gundam”. It was said that the aircraft was lost after escaping the battle between humans and Spacenoid.
However, in the suburbs of Yamashita Pier in Yokohama, a large number of parts that seemed to be Gundam-type mobile suits were discovered.
In order to elucidate these parts, engineers from various fields will gather at “GUNDAM FACTORY YOKOHAMA” to research, analyze and reconstruct.
It was as if a new Gundam was being developed.
Finally the frame is completed and the startup experiment begins!