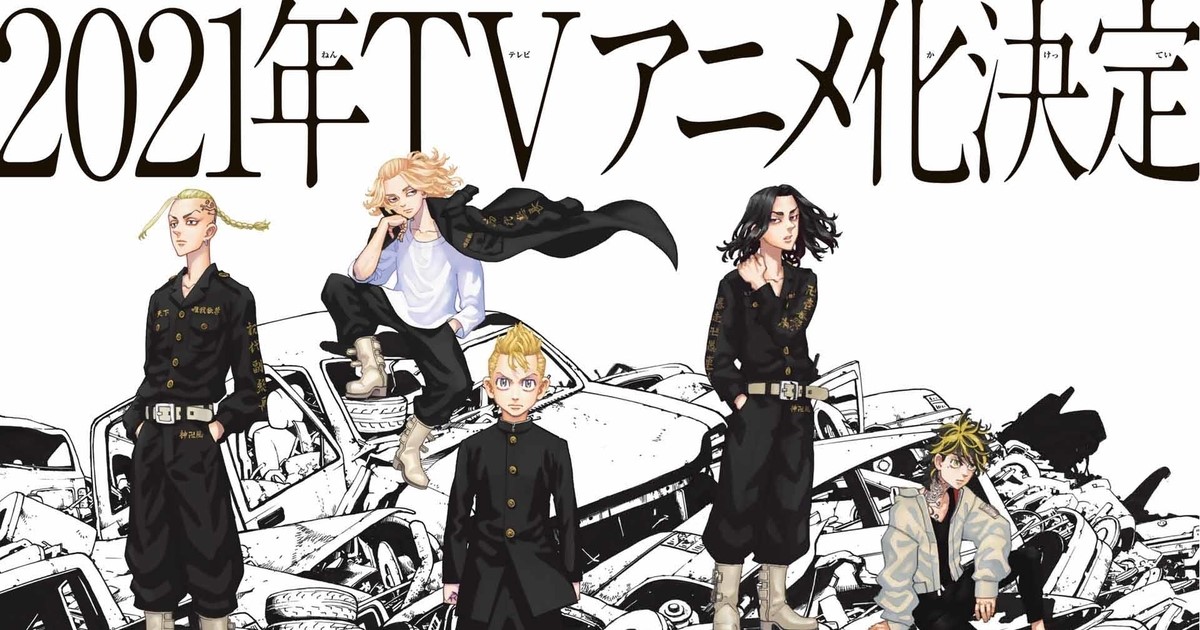 On December 16, it was released that the TV anime “Tokyo Revengers”, based on Ken Wakui’s manga currently being serialized in “Weekly Shonen Magazine” (Kodansha), will be broadcast in April 2021. The voice cast was also announced, with Yuki Shin as Takemichi Hanagaki (Takemichi), a useless freelancer who has hit rock bottom in his life, Yuu Hayashi as Manjiro Sano (Mikey), the president of Tokyo Manjikai, Tatsuhisa Suzuki as Ken Ryuguji (Draken), the vice president, Azumi Wake as Hinata Tachibana (Hinata), the only boyfriend Takemichi had in middle school, and Ryota Osaka as Hinata’s younger brother. Ryota Osaka will be playing Naoto, Hinata’s younger brother.

The original story was serialized in “Weekly Shonen Magazine” in 2017 by Mr. Wakui, known for “Shinjuku Swan” and other works. The story depicts Takemichi, a useless freelancer who has hit rock bottom in his life, taking revenge to save his girlfriend and change the person he has been running away from. Takemichi learns that his middle school sweetheart Hinata was killed by Tokyo Manjikai, the deadliest gang of villains in the world, and makes a timely leap back to the peak of his life 12 years ago in middle school.

The anime will be directed by Koichi Hatsumi and produced by Raiden Film.

This story has a time-lapse setting, which is rare in other Yankee manga. The main character, Budo Hanagaki, goes back in time to his junior high school days twelve years ago in order to save the woman he has lost.
He joins a group of gangsters and struggles to change the future by going back and forth between the present and the past over and over again, which is sure to attract both men and women.
Also, unusually for a Yankee manga, the main character is not a good fighter. It is also a highlight that the main character is brave enough to get her friends and colleagues involved.
If you like “The Girl Who Leapt Through Time,” “STEINS;GATE,” “Bokudake ga Inai Machi,” and other time-lapse works, this is a must-see.

Takemichi Hanagaki finds out from the news that Hinata Tachibana, the only girlfriend he ever had in his life, was killed by the Tokyo Manjikai, a gang of gangsters he dated in junior high school.
He lives in a rundown apartment with thin walls, and at his part-time job, the manager, who is six years younger than him, treats him like an idiot. To top it all off, he’s on ……. One day, in the midst of such a rock-bottom life, he makes a timely leap back to his junior high school days 12 years ago!
In order to save Hinata and change the life he has been running away from, Takemichi, a useless freelancer, aims to reach the top of the Kanto’s worst gang of delinquents!

A useless freelancer who has hit rock bottom in his life. His life peaked when he was in junior high school, and he finds out on the news that his only girlfriend at the time, Hinata Tachibana, has been murdered. One day, he is suddenly sent on a time leap back 12 years.

Takemichi’s only girlfriend in middle school. A kind and cheerful girl with a keen sense of fairness. In the present day, she is caught up in a war between the Tokyo Manjikai and dies.

Hinata’s younger brother. In the present day, he is a police officer. He survives a time leap thanks to Takemichi’s advice, and becomes an ally in order to save his sister Hinata.

President of the Tokyo Manjikai, a group of gangsters. Despite his small stature, he is the strongest man in the group and is known as “the invincible Mikey. He meets Takemichi by chance and takes a fancy to him.

Vice president of the Tokyo Manjikai, a group of gangsters. Also known as “Draken“. His trademark is the dragon tattoo on his temple and his gold pigtail. He always works together with Mikey, the president, and is also a good partner.

Nazuna
It’s a very Yankee manga PV. It’s very cool, with a real sense of motion. Each character has their own personality, and I’m sure you’ll fall in love with them. I can’t wait until it is on air!

Nazuna
The music is way too damn cool! who’s going to sing theOP/ED

Nazuna
Unfortunately, detailed information on broadcast stations and time slots has not yet been released. As soon as the information is released, we will share it here, so please wait a while. I wish I could watch it on Netflix or Crunchyroll.