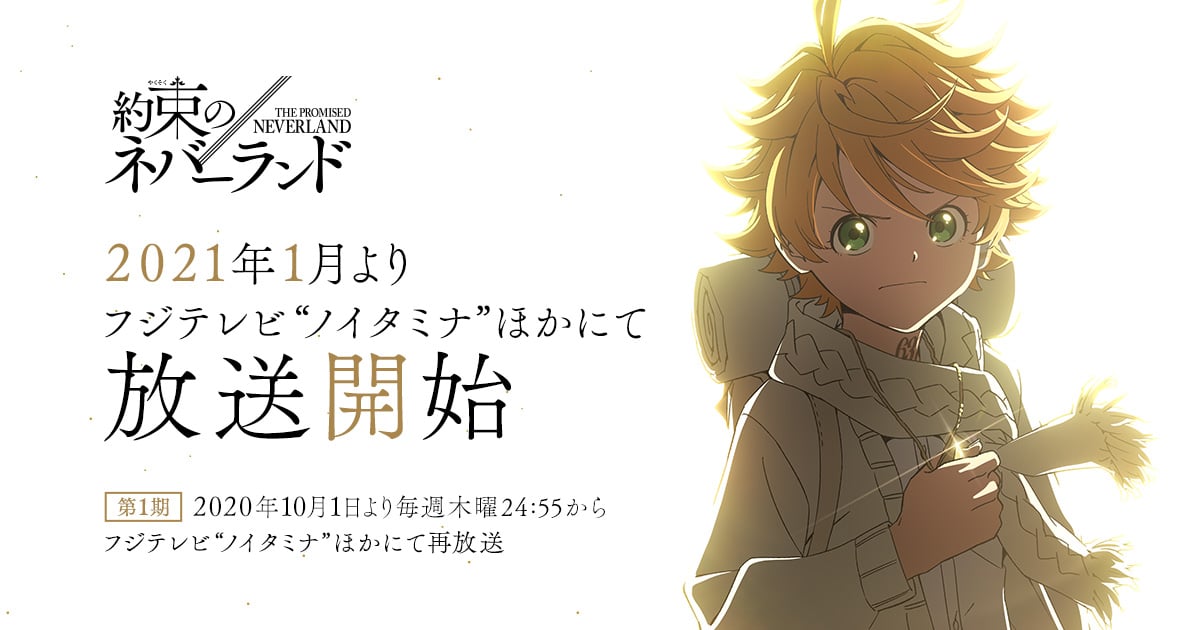 The second season of the TV anime “The Promised Neverland (YAKU Neva)” based on the popular manga written by “Kaiu Shirai” and drawn by “Posuka Demizu”, which was serialized in Weekly Shonen Jump and reached its conclusion with the final episode #181 in the 28th issue of 2020, will be released in the near future.

The second season of “The Promised Neverland (YAKU Neva)” will be broadcast on “Noitamina” every Thursday at 25:25 on January 7, 2021, in collaboration with “CloverWorks”, an animation production company that has produced “FAIRY TAIL Final Series”, “Darling in the Franchise”, “Fugo Cop Balance: UNLIMITED”, “Fate/Grand Order – Absolute Monster Battlefield Babylonia”, and other popular works. It will start airing on Thursdays at 25:25 in the “Noitamina” slot from January 7, 2021!

The second season of the TV anime “The Neverland of Promises”, starring Sumire Morohoshi, Marei Uchida, Mariya Ise and other gorgeous voice actors, will start airing on Noitamina every Thursday at 25:25 from January 7, 2021!

|Key visual for the 2nd season

The key visual for the second season of the TV anime “The Promised Neverland,” which will begin airing on January 7, 2021, shows Emma, who successfully gained her freedom in the first season, staring into the light with a determined look in her eyes.

One day, Emma and Norman, the oldest two, witness a ONI and learn that Isabella, their real “mom,” has been trying to raise them as food for the ONI.

Refusing the fate of being eaten, they secretly prepare to escape from prison with the help of Ray, who is the same age as them, in order to survive with everyone else.

Don, Gilda, and the others join them, and their escape from the prison finally becomes a reality.

In the middle of all this, Norman, who was at the center of the planning, is shipped out to ONI.

Emma and the others, not wanting to cause any more casualties, leave the children under the age of four at the house and head for the B06-32 point described in Minerva’s message!

With the alarm sounding and the ONI on the loose, Emma and her friends begin to flee, relying on the few clues they have.

What do they see when they abandon their false peace and seek freedom?

Children of Eternity, face the despair!

Nazuna
Season 1 of this film is also available on Netflix and other sites, so if you haven’t seen it before season 2 starts, you need to watch it!