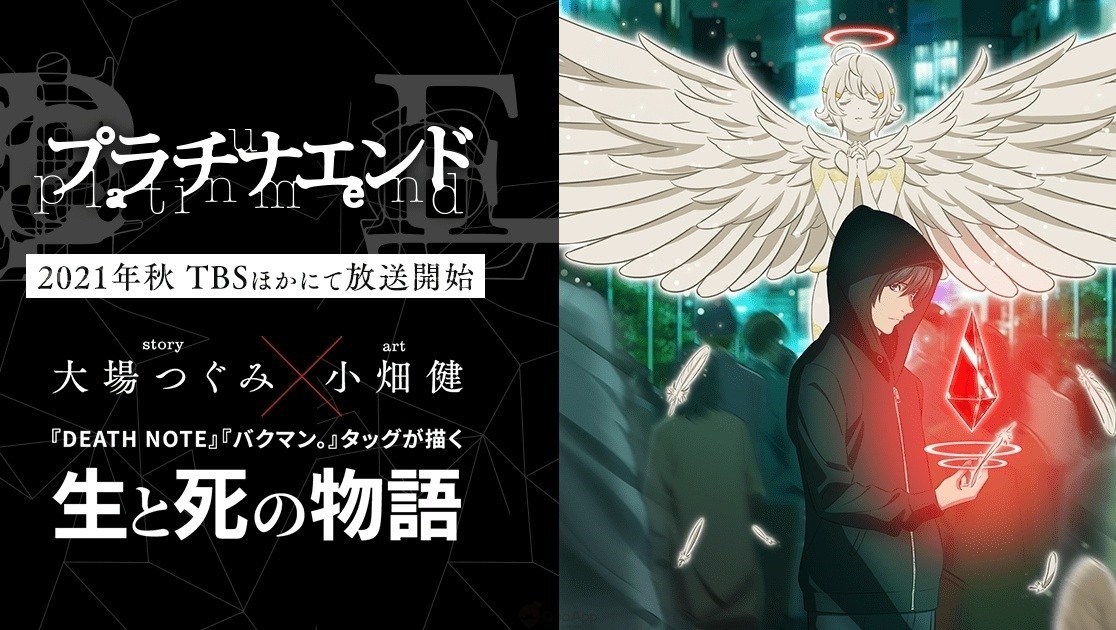 The latest work by Tsugumi Oba (original story) and Takeshi Obata (manga) of “DEATH NOTE” and “Bakuman” will be adapted into a TV anime on TBS and other networks in the fall of 2021. A teaser visual and a teaser PV have been unveiled, and the main staff has also been revealed.

The work is currently being serialized in “JUMP SQ.” and has sold a total of 4.5 million copies worldwide. A boy named Mirai Kakehashi, who despairs of everything and is about to throw away his life, is given angel wings and arrows, and gets involved in a battle as a candidate to become a god.

Directed by Hideya Takahashi of “JoJo’s Bizarre Adventure: The Golden Wind”, character design by Koji Odachi of “No Game, No Life”, series composition by Shinichi Inozume, and animation production by SignalMD.

The teaser PV depicts the protagonist, Tomorrow, and the angel, Nasse, in a mixture of pictures from the original work and live action, with the mysterious catchphrase “I want to be happy” at the end of the video.

In the midst of all this, a god candidate appears before the masses in the guise of the hero “Metropoliman”. Metropoliman, who flaunts his existence by helping people, declares that he will become a god by “defeating 12 enemies” = killing all the god candidates except himself, and uses his angelic powers to kill god candidates and purge criminals. Although wary of his dangerous ideology, tomorrow he tries to go about his daily life, but is stabbed with a red arrow by his classmate Saki Hanakago, who had also become a god candidate. Fortunately, his affection for her does not lead to a confrontation, and he forms a cooperative relationship with her in order to protect her, who does not have wings, but later he comes across a scene where three god candidates are lured out by the Metropoliman and killed. The two become even more cautious, but they also form a cooperative relationship with Mukaido Nanato, a god candidate who shares the same ideology, and decide to stand up to Metropoliman.

Kanade Uryu, a.k.a. Metropoliman, who is trying to reduce the number of other god candidates even further, begins to use criminals as decoys and to carry out terrorist-like sabotage. Wounded by this encounter, Kanade decides to seriously eliminate tomorrow’s group, and uses Hajime Soko-tani, one of the god candidates who is fascinated by her, to kidnap Mukaido’s family and lure out tomorrow’s group. After a battle involving Kanade’s subordinates who she had given wings to, Saki who had newly gained wings, and Hajime who had been turned by the Red Arrow, Hajime defends tomorrow and dies, Kanade is shot and killed by Mukaido, and Mukaido’s diseased body reaches its limit, and the three god candidates are eliminated.

Nazuna
The cast has not yet been announced. I’m really looking forward to seeing who will play the role. Let’s wait for more information!

I wish I could watch it on Netflix or Crunchyroll….