Shin EVANGELION “Unit 13” Comes Out With An Overwhelming Volume Of 160 cm! 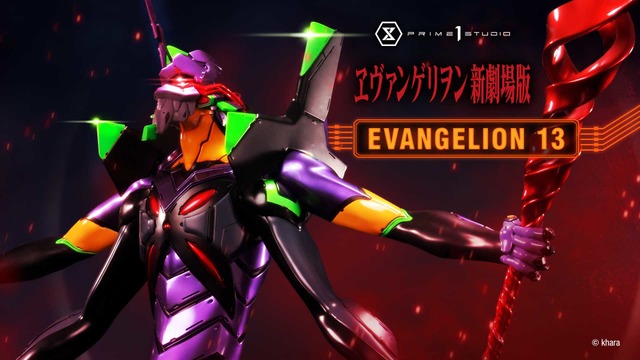 From the movie “Shin EVANGELION”, “Evangelion unit 13” on which Shinji Ikari and Kaworu Nagisa are on board is three-dimensionalized with a large volume of 160 cm in height (including spear). Reservations are accepted at the “Prime 1 Studio” online store.

This product “Ultimate Diorama Masterline Shin Evangelion Theatrical Version Evangelion unit 13” has purple and green coloring and form reminiscent of “Evangelion unit 1”, as well as four distinctive arms spread out “Longinus’s spear” expressing the scene in the play with a dynamic pose from the movie.

The dedicated base is based on the image of “Central Dogma”, the land of fierce battles at the climax of “Shin Evangelion Theatrical Version: Q”.
The 12th Apostle swirls around Unit 13 to create a terrifying and divine atmosphere in the play.

The price of “Ultimate Diorama Masterline Shin Evangelion Theatrical Version Evangelion unit 13” is 156,900 yen (excluding tax). Reservations are currently being accepted at the “Prime 1 Studio” online store, and the product is scheduled to go on sale from April to July 2022.
In addition, the DX version with “arm parts with two Longinus spears crossed and held underneath” and “arm parts with left and right hands raised” is also available for pre-order for 167,900 yen (excluding tax).