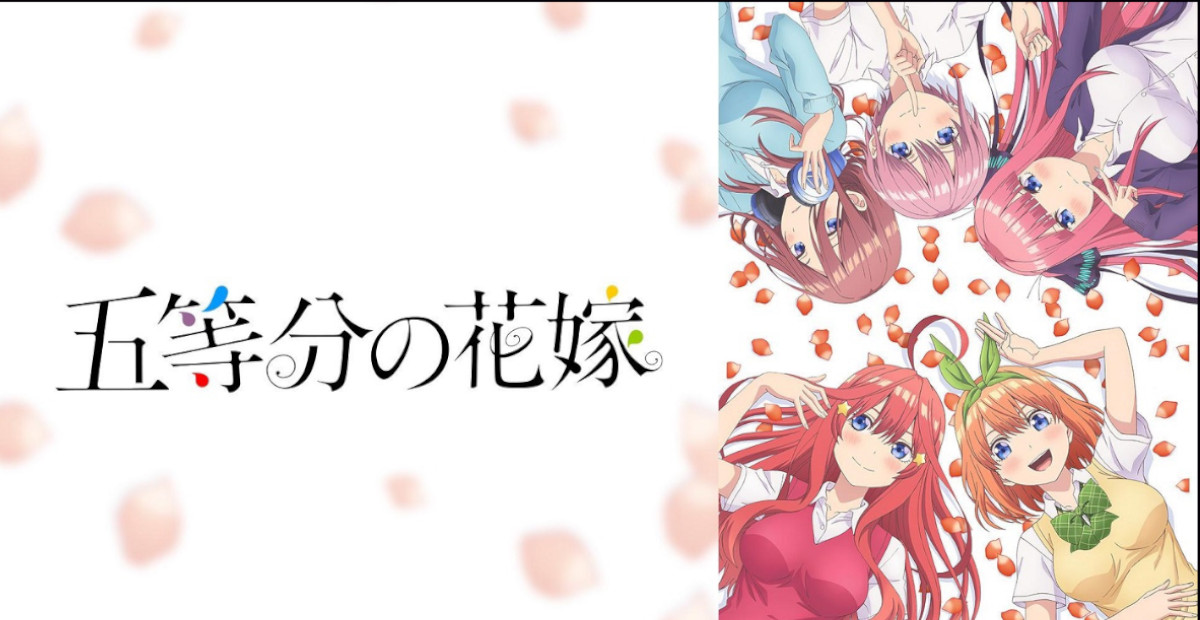 This is a romantic comedy manga about a group of high school girls with unusual quintuplets and the struggles of a high school boy who is assigned to be their private tutor.

The series was first serialized in Weekly Shonen Magazine in August 2017, and has sold over 3 million copies, with an anime broadcast on TBS starting in January 2019, and has garnered a lot of attention, with the official Twitter account exceeding 100,000 followers.
We interviewed the author of “The Bride of the Fifth Class” to find out the secret behind its popularity, which attracts not only fans of the original work but also anime fans!

|1) They’re just so cute! The charm of the “five heroines in five colors”!

The idea of a “quintuplet romantic comedy” had actually been rejected by the previous editor. I thought that if all the heroines had the same face, it would be difficult for readers to get into the story and fall in love with them. …… I kept submitting it to serialization meetings in various situations, and finally decided to give it a try in a read-through, which led to the current series. If I had lost heart halfway through, I don’t think this (serialization and anime) would have happened.(Author: Haruba Negi)

The eldest daughter, Ichika, is usually a dependable older sister, but the gap between her devilish face and her shy face is unforgettable. The second daughter, Nino, has an attitude that’s not so much TSUNDERE as TSUNDORA (sub-zero), and it’s addictive to watch her soften and soften. The third daughter, Miku, looks cool at her own pace, but her inner passion and single-mindedness touches your heart. The fourth girl, Yotsuba, is full of energy and a bit of a natural, and is a mood maker who is honest and straightforward. The fifth daughter, Itsuki, is overly serious and clumsy, but is always willing to do her best.

The five sisters of the Nakano family have different personalities, but they are identical and have the same facial features! Taking advantage of this “advantage,” they often switch places to play with and confuse the protagonist, Futaro, or secretly pretend to be the other sisters to find out their true feelings… …and the unique setting of the quintuplets shines through.

I think that drawing faces is important for all manga artists, including myself, but when it comes to the quintuplets, if I draw too many faces, I sometimes feel like I’m giving them a face that’s unique to them. I think that’s the best weapon in this work, so I feel like I’m competing solely on that. I want to do everything that can be done with the quintuplets before the series ends.(Author: Haruba Negi)

The five unique children are truly “five people, five colors,” but there were actually some twists and turns before they settled on the current setting.

The personality of each member of the quintet was not decided at once. We had to combine a lot of different ideas, and as a result, we came up with the current quintet. We also discussed with the editor in charge of the story how many characters would be good, and there were some ideas of ‘four’ and ‘six’, but …… we decided that ‘five’ would be perfect, so we decided to keep the quintuplets.(Author: Haruba Negi)

|(2) An anime adaptation less than a year after the first serialization. And produced byTHE “Tezuka Productions”!

It was decided to make an anime less than a year after the series started, so at first I didn’t even imagine that it would be …… “What? I was a bit skeptical and couldn’t really grasp it. Once it started airing, the response was completely different from what it had been before – as an example that can be seen in the numbers, the number of followers on Twitter increased rapidly and exceeded 150,000.(Author: Haruba Negi)

The long-awaited anime broadcast started in January 2019 in the TBS “Animerico” slot, and it was produced by Tezuka Production! It is a well-established company with a history of more than 50 years, founded by Tezuka Osamu in 1968, and gradually became involved in animation production as well. Tezuka Productions has a strong image of Tezuka Osamu’s works, but in 2018, they produced the second season of the popular anime “DAGASHIKASHI”. Satoshi Kuwabara, who was the director at that time, is also the director of “The Quintessential Bride”.

I was able to participate in the creation of the story from the beginning, and when I told the scriptwriter that I wanted something different or that I wanted to be included, he was able to accept my requests. The length of the story and the way it is presented differs between anime and manga, but I was grateful to the scriptwriter who said, “We need what we need,” and “We’ll cut off what we don’t need,” while still bringing in the important scenes.(Author: Haruba Negi)

The author was convinced that this was the ideal anime adaptation. The impact of this work has been so great that the White Day Fair held in collaboration with “Atre Akihabara” from March 1st has been selling out all the goods. It was such a success that people lined up at the collaboration store from morning every day. (Bride of the 5th degree x Atre Akihabara collaboration Period: March 1 (Fri.) to March 14 (Thu.), 2019)

In addition, sales of Audio Technica headphones, which Miku, the third daughter, wears in the story, have been increasing.

The five sisters of the Nakano family are voiced by a spectacular cast of voice actors, which has become a major topic of excitement.

I participated in the casting process, and received data from about 50 people who had recorded their lines for each character, from which I selected five people for each character. The animation team and the editorial team did the same selection, and finally chose the ones who overlapped. The members were so gorgeous that I wondered if it would really happen. I was really looking forward to hearing the voice when it was decided, because it was the result of a serious selection based on the image of the voice. I can’t wait to hear it!” I was really looking forward to it.(Author: Haruba Negi)

Mr. Haruba said that he participated in the recording of the first episode. He was very impressed to see the characters being brought to life right in front of his eyes by the veteran voice actors, and he was even more surprised when he saw the on-air recording.

I was impressed by the voice actors’ passionate performance even during the recording sessions when there were no pictures attached, but when I saw them actually moving and talking on TV, the cuteness was so much more ……! I was surprised to see that the character I created was so cute. I was so surprised. I usually can’t look at things objectively when I’m drawing them, but by changing the form of my work to someone else’s work like this, I was finally able to look at them objectively and think, “Wow, they’re really cute. …… It was really good.(Author: Haruba Negi)

In episode 8, “The Beginning Photo,” which aired on February 28, 2019, many people were struck by the cuteness of the line “I can’t do it” by Itsuki, played by Inori Mizuse. Haruba’s Twitter tweet, “I like it so much, I listen to it over and over again,” received many sympathetic replies saying, “I totally understand. “This is the moment when I realized how wonderful it is to have a voice for my favorite characters in anime.

|4) It’s not just a harem story, it’s a “bonding” story that starts with zero likability.

I wanted to create a story where the hero who wants to teach the heroine how to study and the heroine who doesn’t want to be taught gradually form a bond. When the series first started, I thought, ‘The hero is working so hard, but he’s rebelling against her. I can’t root for them! I couldn’t root for them!” There were some people who said that, but I kept thinking, “They’ll get even cuter as they start to bond! They’ll be even cuter when they start to bond!

The situation in which the male main character is surrounded by various types of beautiful women who take a liking to him is a “typical” development in romantic comedies, but in this film, instead of taking a liking to him, the story starts with the worst first impression. The five children, who don’t like to study, are repulsed by Fudaro, who suddenly becomes their tutor, and take an uncooperative attitude, even trying to kick him out of the house.

Fuutaro, who has almost no favorability rating, has to teach them to avoid getting red marks (and to support his poor family with part-time job money), but as he struggles to improve their grades while being pushed around by the five girls, he gradually gains their trust.

Originally, I wanted to make the main character go through hardships, and the idea of the heroine being a quintuplet came about because I thought that not being able to tell them apart would be a hardship that would be familiar to people in their daily lives. It was an idea that came to me from ……. Anyway, the heroines rebel against each other violently, so I had a lot of trouble in the beginning of the series (laughs). The second daughter, Nino, in particular, was a character that had readers saying, “If I had to choose a favorite girl out of the five, Nino would never be the one,” but little by little, people began to understand her personality and character, and I’m glad that readers are accepting her now.(Author: Haruba Negi)

While overcoming various difficulties, the five children gradually get to know Futaro. As they overcome various difficulties, they gradually get to know Fudaro, and a faint feeling of love grows in them. One of the highlights of the film is the love between the five sisters, who are bound together by the inextricable bond of “quintuplets. It’s not just love. It is a story that depicts not only love, but also family ties.

In “The Quintessential Bride”, one of the biggest mysteries is already presented from the beginning of the first episode, as the heroines all have the same face. The woman in the wedding dress who is about to marry Fudaro – it’s obvious from her face that she is one of the five children ……, but which one?

The anime is in the final stretch for the final episode, but will the identity of the “bride” really be revealed? I’m looking forward to watching the love story between the quintuplets and Futaro with great excitement.

Nazuna
It’s a very interesting anime with five cute heroines and Fudaro’s interaction with them. Now, season 2 is even being released. After the anime airs, Twitter is abuzz with talk about it, so you can see how popular it is.