[Spoiler alert] Who’ s Mikey? An introduction to the anime and beyond-Tokyo revengers 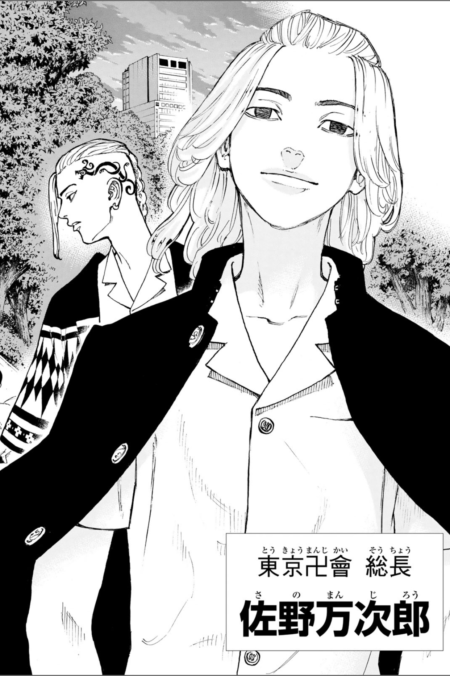 He is the President of Tokyo Manjikai and is 15 years old, one year older than Takemichi.

He is small in stature, but is the strongest in fights, and is known as the ” Unbeatable Mikey.

His strength was such that he was able to knock out a high school student with a single kick while still in elementary school.

He founds the Tokyo Manjikai with Draken and others to protect his friends.
He likes Takemichi’s guts and becomes his friend.

He’s unbeatable in a fight, but he has a pretty cute personality: he gets flustered when he doesn’t have a flag for the kids’ meal, and he’s happy when Draken makes and puts up a flag.

His sister Emma also said that he is still a weak boy who cannot sleep unless he is holding a blanket.

Mikey’s beloved bike is a Honda CB250T, which is a genuine motorcycle.

It is said that the nickname “Babu” comes from the heavy bass sound of the exhaust, “Barbu, Bambu”.

| 「All of you who think Par-chin lost, come out and I’ll kill you. Tokyo Manjikai is mine. As long as I’m behind him, no one can lose.」

Mikey’s words to the enemy who was mocking Per-chin was beaten to a pulp.

Nazuna
A real man! That’s because he’s the strongest, Mikey!

| 「So I’m going to create a new era of gangsters.」

Quote: 「だから俺が不良の時代を創ってやる」
Translation: “So I’m going to create a new era of gangsters.”

He’s always fighting, but he makeup his own matter.
Mikey thinks it’s wrong to say that people who fight are lame.
This is the scene where Mikey declares that he is going to create an era of gangsters in the Tokyo Manjikai.

Nazuna
There are different kinds of people in gangs. It’s not good to disparage all gangs.

| 「The really important thing is not to win the fight. It’s about not losing to yourself.」

Quote: 「本当に大切な事は喧嘩に勝つ事じゃねえ。自分に負けない事だ。」
Translation: “The really important thing is not to win the fight. It’s about not losing to yourself.”

It’s a line that clearly shows why Mikey is so strong. It’s important not only in fights.

Nazuna
I’m going to do my best not to let myself down!

Takemichi repeatedly makes a time-lapse and returns to the present day after saving people in the past many times, but no matter how many times he repeats the process, only Mikey is not saved in the present day.

Especially in the fifth time leap back to the present day, Takemichi was attending the executive meeting of Tokyo Manjikai, but Mikey was missing.

However, he later learns that Mikey has been purging the members of Tokyo Manjikai one after another, and Draken is on death row, Pa-chin, Payan, and Chifuyu are killed, and Mitsuya is missing.

Afterwards, Takemichi settles with the Black Dragonand returns to the present day.

But the situation was even worse in the 6th present day when he returned. This time, all the main members of Tokyo Manjikai had been killed.

And once again, Mikey is missing. However, Takemichi received a letter from Mikey saying that he was in the Philippines.

Takemichi soon travels to the Philippines, where the present-day Mikey shows up for the first time.

Mikey was saddened by Takemichi’s departure from Tokyo Manjikai in that era. Draken and Mitsuya asked Mikey to keep Takemichi out of Tokyo Manjikai from now on, but I guess Mikey couldn’t accept that.

After that, Mikey hands Takemichi a gun and asks him to kill him. However, there is no way that Takemichi can do such a thing, so Mikey has no choice but to put the gun to Takemichi’s head and create an environment where Takemichi has to kill Mikey or he will die.

However, when Takemichi is still unable to kill Mikey, Naoto Tachibana mistakenly thinks that Takemichi will die and shoots Mikey dead.

Mikey breathed his last in Takemichi’s arms, saying thank you.

After that, Takemichi returned to the past again and finally killed Kisaki in the past and came back to the present.

This time, everyone from Tokyo Manjikai was there, and Takemichi also got engaged to Hina at Parchin’s wedding. I thought I’d returned to my ideal future, but

After all, Mikey was the only one who was not there.

This is the end of the story that is currently being serialized in Weekly Magazine. I will update this page if there is any progress in the story.っｇ