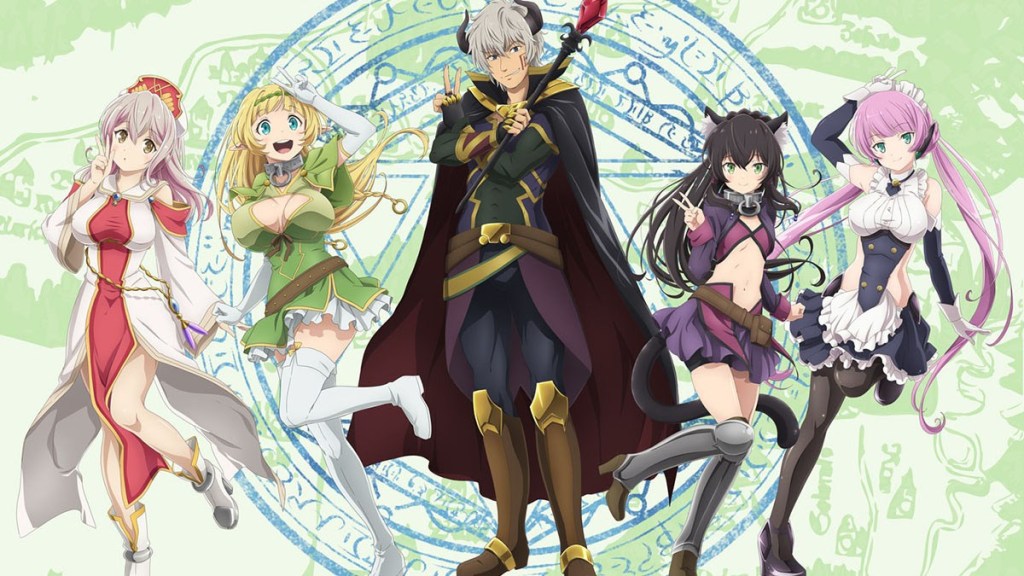 The second season of the TV anime “How NOT To Summon A Demon Lord” (original work: Yukiya Murasaki, illustration: Takahiro Tsuruzaki, published by Kodansha Ranobe Bunko) will start on April 8th.

At the same time, the main visual, opening and ending artists, and a 15-second commercial will be released.

|How NOT to Summon a Demon Lord: Omega (Ω) introduction

This work is the second season of the TV anime “Isekai Maou to Shoujo no Shakumon Majutsu” that aired in 2018.

The main character, Takuma Sakamoto, who was summoned to another world in the form of a game, calls himself the “Demon King Diavlo” and proceeds with absolute strength while acting as the Demon King. When the first season was aired, it attracted a lot of attention as a “dream and magic adventure story.

The start date and time of the broadcast has now been revealed! It will start airing every Thursday from 1:28 a.m. on April 8 on TBS, and every Saturday from 2:00 a.m. on April 10 on BS-TBS.

At the same time, this visual depicting Diavlo and the heroines has been released. The visual depicts Diavlo, Shera, Rem, Lumakina, Rose, and Horn against the background of a stained glass church. The illustration is sure to raise expectations for the new adventures that will unfold in the second season.

|How NOT to Summon a Demon Lord: Omega (Ω) Opening and Ending Artists

The opening and ending artists for the TV anime “How NOT To Summon A Demon Lord” have been announced!

Both the opening and ending themes will be performed by Yuu Serizawa, who also plays the role of Shera in this work.

The opening and ending themes will both be performed by Yuu Serizawa, who also plays the role of She-Ra in the game. In addition, Yuu Serizawa will be collaborating with two artists for the songs! The name of the artists announced this time is “Yu Serizawa with ●●&◯◯◯” and the latter part is hidden.

The name of the two artists to collaborate with will be revealed at a later date. Please look forward to this unexpected tag team!

■Please give us some comments about your enthusiasm for the theme song and your thoughts on the music.

I was so excited about the second season of Isekai Maou, and to my surprise, I was able to be in charge of both the OP and ED, and I’m so grateful!

What’s more, this time it’s a collaboration song! I hope that a super chemical reaction will occur between the work, myself, and the collaborating artists.

■Please give a message to the fans of the original story.

Congratulations on your second season of Isekai Maou! Thanks to all the fans who continued to support us before and after the anime started, we too are celebrating the second season of our ministry.

In the second season, the story will be more serious, so I hope everyone will enjoy seeing the various faces of Shera in the anime!

|How NOT to Summon a Demon Lord: Omega (Ω) Trailer

|Whare to watch How NOT to Summon a Demon Lord: Omega (Ω)

How Not to Summon a Demon Lord season 1, consisting of 12 episodes, released on July 5, 2018 and ran till September 20 of the same year. Season 1 only adapted a few volumes of the source material, so there’s more than enough material for a second season.

It was recently confirmed on the official website of the anime that ‘How Not to Summon a Demon Lord’ Season 2 is scheduled to April 8, 2021. Here’s a tweet that officially announces its production decision:

During Virtual Crunchyroll Expo 2020, it was confirmed that the second season is “coming to Crunchyroll in 2021”.

Nazuna
“I didn’t check out the next season’s anime, but I didn’t know it was going to be called Otherworldly Demon King and Summoned Girl’s Slave Magic Ω. I’m looking forward to it so much!” It’s so popular that there are tweets like this one on Twitter. The battles are a good mix of warriors and struggles, so I’m looking forward to season 2.