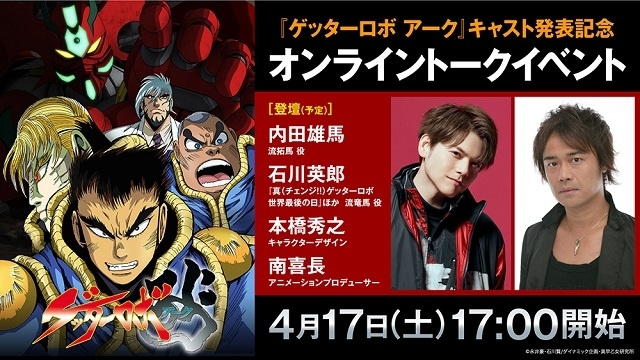 It has been decided that the anime version of “Getter Robo Arc” will start airing as a TV anime in July this year. Yuma Uchida, Naoya Uchida, and others will appear in the anime. Along with the announcement, a new key visual and the second promotional video were released, and it was also revealed that the opening theme song will be sung by “JAM Project”.

Based on the late Ken Ishikawa’s robot manga series “Getter Robo Saga”, which started with “Getter Robo” serialized in 1974, this is the final work in the series. Takuma Nagare, the son of Ryuma Nagare, who fought against the threat to humanity as a pilot of the Getter Robo, gets into a new machine, the Getter Arc, and throws himself into battle against the unknown enemy, the Andromeda Ryukoku. serialized in Action Pizzazz extra edition “Super Robot Magazine” (published by Futabasha) in 2001, but became unfinished after the death of Ken Ishikawa in 2006. The series was first serialized in 2001 in Action Pizzazz’s Super Robot Magazine (published by Futaba), but became unfinished in 2006 when Ken Ishikawa passed away.

Yuma Uchida stars as Takuma Nagare. Newcomer voice actor Zorimaro Mukono plays Kamui Sho, who is of human and Hachiu descent and pilots the Getter Kirik, while Kazuhiro Suseishi of the overseas anime “Adventure Time” plays Baku Yamagishi, the younger brother of Tail, who boards the True Getter Robo with Ryoma and others after it flies off to Mars and becomes the pilot of the Getter Khan. Kazuhiro Sunaishi of the overseas anime “Adventure Time” plays the role. Naoya Uchida will play the role of “True (Change!)”. Continuing from the OVA series such as “Getter Robo: The Last Day of the World,” Naoya Uchida will play Hayato Kami, who used to fight on the Getter Robo with Ryoma and the others, and now leads the Getter Team as the director of the Saotome Research Institute.

Yuma Uchida said, “The Getter Robo series is a historical work that has been around for over 45 years. The fact that it’s still being animated after such a long time is proof that the series has been loved for a long time, and I’m very moved. When I was given the role, I felt the size and weight of it, but as always, I will do my best to create the work to the best of my ability.

The new key visual is an illustration of Takuma, Kamui, Baku, Hayato, and the main robot, Getter Ark, all together. The second PV with the new cut includes the battle scene of Getter Robot D2, where Takuma first boards, and the scene where the three Getter Machines combine to form the Getter Arc.

JAM Project will continue from the OVA series “Shin Getter Robo vs. Neo Getter Robo” and “New Getter Robo”. The opening theme song of “Getter Robo Arc”, “Bloodlines ~Bloodline of Destiny~”, will be released on CD on July 14.

Additional staff members have also been announced. Tadashi Hayakawa, who wrote the script and composition for “Steel God Jeeg,” Kazuya Hoshi, who wrote the character concept for “Mazinkaiser SKL Versus,” and Hideyuki Motohashi, who wrote the character design for “Maajyu Sensen,” have joined forces with Go Nagai, Ken Ishikawa, and others who are associated with their works. Animation production will be handled by Bee Media, the same company that produced the OVA “Getter Robo” series.

An online talk event featuring Yuma Uchida and Hideo Ishikawa, who played Ryoma in the OVA series, will be held on April 17 at 5:00 p.m. on the BANDAI NAMCO Arts Channel (https://youtu.be/h_p1tbNd7js) on YouTube. Character designer Hideyuki Motohashi and animation producer Yoshinaga Minami will also appear and reveal the behind-the-scenes of the production of “Getter Robo Arc”. Comments from cast members including Yuma Uchida are as follows.

|Comments from the cast of the first announcement

■Yuma Uchida (as Takuma Nagare)
My name is Yuma Uchida, and I’ll be voicing Takuma Nagare.
The “Getter Robo” series has been around for over 45 years. The fact that it is still being animated after such a long time is proof that the series has been loved for a long time, and I am very moved by that.
When I was given the role, I felt the size and weight of it, but as always, I will do my best to create the work to the best of my ability. I will do my best so that many people can enjoy it! Please look forward to “Getter Robo Arc”!

■Kazuhiro Sunzeki (as Baku Yamagishi)
When I heard that I had been chosen for the role, I was so happy that I screamed, and before I knew it, I was pumping my fist to the sky. I was so excited to be a part of the content that I have loved since I was a child. At the same time, I felt the pressure of whether or not I would be able to inherit the Getter spirit that my predecessors had passed down to me and deliver a hot time to everyone! I also felt a lot of pressure. I also felt a strong desire to live up to the expectations of the fans, as this is a work with a long history. I’m really happy and proud to be involved in this work.

■Naoya Uchida (as Hayato Kami)
I was one of the Getter Robo fans, just like you, so I was excited when I heard about it. I was thrilled when I heard about it. “I can experience the world of Getter Robo again! And I can play Hayato Kami again! That’s how I felt. I can’t contain my excitement to be a part of the final work of the now deceased Mr. Ishikawa’s “Getter Robo Saga”. I’m also looking forward to working with director Kawagoe and the cast and staff again. I’m excited!

Nazuna
The Getter Robo arc is a continuation of the manga version of Getter Robo No. 1, but this area hasn’t been animated yet, so I wonder how they’re going to explain about Ryoma. Anyway, I’m looking forward to it!