An interview with Yumiko Kobayashi, the setting designer of “That Time I Got Reincarnated as a Slime 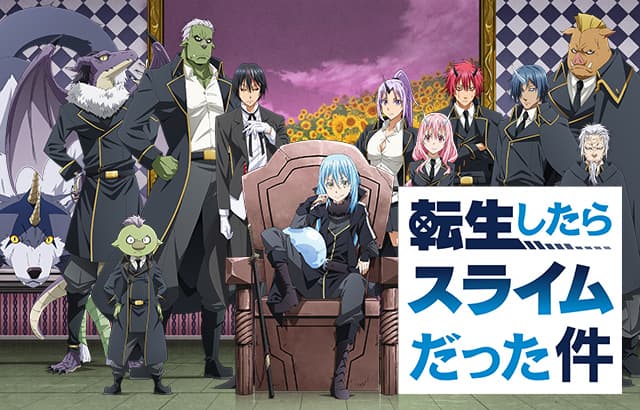 A salaryman who was reincarnated as a slime starts a new life in another world! The protagonist, Rimuru, has founded the Jura Tempest Federal State with many demons that have gathered to adore him, and is in the process of giving shape to the gentle ideal of “a country where humans and demons can walk together. However, in this world, there is an existence that turns against demons.

That Time I Got Reincarnated as a Slime” was serialized by the author, Fuse, on the novel submission site “Shosetsuka ni Narou” and gained popularity. The manga version was written by Kawakami Yasuki, and the anime adaptation was based on the manga version. The first season of the anime started in October 2018. The first part of the second season will air from January to March 2021, and the spin-off anime version of “That Time I Got Reincarnated as a Slime-TENSURA Nikki” will start airing in April.

The studio in charge of animation production for this series is Eightbit. They are the same studio that produced “Yamanosume”, which created the mountain climbing boom, and “The Irregular at Magic High School”, the latest in the popular series. They have produced the anime “That Time I Got Reincarnated as a Slime” since its first season, and are also in charge of the anime adaptation of “That Time I Got Reincarnated as a Slime-TENSURA Nikki”. The studio is also wielding its full power in the second season. For this interview, we spoke with Yumiko Kobayashi, who is in charge of creating and organizing the settings for the complex world of “TENSURA” and its many characters. This is how the settings, which are the important foundation for creating anime, are created!

|The main character before his reincarnation is Japanese, so I decided to design a mixture of otherworldly and Japanese styles.

–Please tell us about your impressions of the original work, That Time I Got Reincarnated as a Slime.

Kobayashi: This was the first time I read “Naro” works (novels and other works that have gained popularity on the novel submission website “Shosetsuka ni Naro”). I just thought it was interesting while reading it. I’ve been enjoying reading both the comicalized version and the novel version ever since.

–When did you join “TENSURA” as a setting creator?

Kobayashi: I joined the staff when the scenario for the first season was all finished. In the first stage, we were creating the setting for the anime based on the comicalized version, and I checked with the directors (Yasuhito Kikuchi for the first stage, Atsushi Nakayama for the second stage) and character designer Ryoma Ebata, while confirming with the original author, Mr. Fushise, the basic aspects of the world view, such as how widespread metal is and whether plastic exists. We checked the basic aspects of the worldview with the original author, Yasuhito Kikuchi, and Ryoma Ebata, the character designers. Basically, the depiction is based on the European style of the Middle Ages.

–I think you have been communicating with Fushise sensei, the author of the original work. What kind of writer do you think Mr. Fuse is?

Kobayashi: I heard that you have a lot of knowledge about the construction industry, and I thought that you were able to incorporate your own knowledge into your work for town and country building. Especially when I ordered the art settings, I paid attention to the descriptions of buildings and towns in the original work.

–What kind of communication do you have with Mr. Fushise?

Kobayashi: First of all, when I ask the person in charge of each setting to create a setting, I extract the description from the original novel and give it to them as a set of instructions for reference. Then, when the person in charge of the setting sends us a rough draft of the setting, we have the original author check the rough draft. Then, I ask them to check the rough settings and give me suggestions such as “the streets in the town should be more like this,” so that I can bring the settings to a complete form.

–In the second season, human nations appear one after another. The Kingdom of Pharmus, the Kingdom of Ingrassia, the Beast Kingdom of Eurasia, and many other countries, as well as the Holy Church of the West, have all appeared.

Kobayashi: Mr. Fushise has an image of a country, and even the size of the population is considered, so he uses that as a base, and the director further solidifies the image. For example, in the case of the Beast Kingdom of Eurasia, we showed a vast orchard, so that viewers could tell the difference between the countries at a glance.

–Please tell us about any settings that you created because of “TENSURA”.

Kobayashi: In the first season, I consulted with the director about the stage of development from a goblin village to the central city of Limuru, and created the art settings. In the second season, as Rimuru grew into a larger country, I incorporated into the design some of Fushise’s suggestions that were unique to the original work, such as making the roads bigger since they would be expanded in the future. Also, Satoru Mikami (Rimuru) is Japanese, so the buildings he creates are a mixture of otherworldly and Japanese styles. I think that’s something unique to “TENSURA”.

|The largest number of character settings have been created in Rimuru.

–There are more and more characters that have been newly introduced since the second season. How do you create the design settings for the characters?

Kobayashi: The character settings are based on illustrations by Mitsuba-sensei and Kawakami Yasuki-sensei, and the design makes the most of their drawings, so I worked hard to gather their pictures in advance. In addition, I extracted the descriptions from the novel for each character. Mr. Ebata, the character designer, read “TENSURA” from the web version (Shosetsuka ni Narou version), so he drew the designs while matching the descriptions of the web version and the novel version.

–Which character have you created the most settings for?

Kobayashi: Rimuru has been made the most. Rimuru’s height has changed, and her hair has also grown in length. Kawakami-sensei drew a lot of patterns for Rimuru’s clothes, so I used those patterns to create the blue coat from the first season, the inner wear when she takes off her coat, the short sleeves, and the other clothes she wears in each episode. I also have a naked setting. I think there are about ten patterns of costumes alone. When she turns into a demon king, she will change into a new outfit, so please look forward to that as well.

–How will you unify your work with “Tensei shita tara slime de tatachi: Tensura Nikki” and how will you give it a different perspective? Please tell us what you have in mind.

Also, since the story is about daily life, the characters from the main story also have costume changes. Not only Rimuru, but also Mirim, Shuna, and Sion appear in new costumes. The houses of the demons in Tempest also make their first appearance in TENSURA-NIKKI, don’t they? I’ve asked the director of the main story (Atsushi Nakayama) to take a look at the setting just in case, so maybe one day I’ll use the setting from “TENSURA-NIKKI” in the main story …… (laughs).

|The staff of other works also tell me that the number of characters in “TENSURA” is unbelievable LOL.

–What kind of setting are you creating for the second half of the second season?

Kobayashi: In the second half of the second season, the battle begins, and the scale of the battle is incredible. According to the description in the novel, it’s 20,000 versus 30,000, so it’s a very large scale battle. The members of Tempest are also divided into armies, but each of them is moving on a scale of about 3,000, and the costumes have to be changed. The director and I have been brainstorming with each other and asking the designers to draw various patterns. I hope you can see the costumes of the mobs in the army.

–In the latter half of the second period, some pretty powerful beings appear.

Kobayashi: Mr. Ebata did a great job drawing the demon lords that the viewers are probably wondering about.

–In some cases, there are characters in the main story that are not drawn by Mitsuba-sensei or Kawakami-sensei. How do you create these characters?

Kobayashi: While listening to the rough image from Fushise and the director, the character designers also cut large rough designs and have them reviewed by the director. Then we get feedback from the artist and reflect it in the finished product. The characters that were created first for the animation side were handed over to Kawakami for the comicalized version, and they later appeared in the comicalized version, so I think we were able to create the characters while communicating with each other.

Kobayashi: That’s right. There are a lot of characters in “TENSURA,” so I’ve been working on the setting for a long time. Even staff members who are involved in other works say that the number of characters in “TTENSURA” is unbelievable LOL, so I’m doing my best through trial and error to see how I can get the designs done on time.

The Jura Tempest Federation, a country founded by the protagonist Rimuru and the many demons who have come to adore him, is in the process of forming a gentle ideal of “a country where humans and demons can walk together” through agreements and trade with neighboring countries.

At the root of Rimuru is his “fondness for humans” due to the fact that he was a human slime. ……

However, in this world, there is a clear “hostility towards demons”.

When confronted with this unreasonable reality, Rimuru makes a choice. What does he not want to lose?

Nazuna
By watching interviews with the creators, I can enjoy anime from a different perspective. Tensura fans have mixed opinions about Tensura-Nikki, but I’m very happy that they released the anime as Tensura-Nikki while we wait for the main story!