Announcing the debut of the first student of the new Vtuber production “kawaii”! 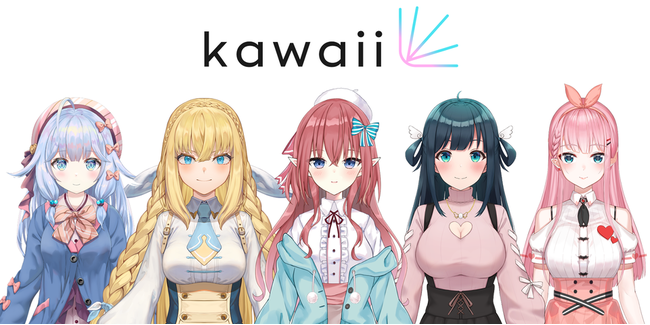 The princess of a country who came from another world to study society.
Because she was raised as a princess, she is a bit of a tsundere who has trouble expressing herself, but she is very kind and straightforward.
She is currently obsessed with Earth’s entertainment and activities. She forgets about her social studies and lives by playing. As a part of that, she started VTuber.

Dhampir is immature in both appearance and mental age.
He is still growing up and is very interested in many things! He has been spending most of his time on Japanese anime and manga.
As a Dhampir himself, he wanted to make more human friends, so he started VTube! I want to be the one who has the most friends in the human world.

A half-elf born between a human and an elf. She has a kind, elfish heart and takes great joy in helping others.
Since she has been living in the forest all her life, she hasn’t had many opportunities to interact with humans and has had trouble getting along with kids her own age, so she became a VTuber to recruit friends.

In fact, her ancestors were angels, and since she has both angelic and human parts, her receptiveness and kindness are outstanding compared to ordinary people. When she is with him, she can feel the tenderness and sense of security that her childhood friend exudes, though she is not aware of it.
Peel off the vinyl cover of the crimped vinyl cover and make it cover the skin.
He also likes Japanese anime and manga, which is why he started his VTuber career.

She is actually the daughter of a demon tribe, and has come to investigate the human world for the war that may come one day. However, she is so comfortable in the human world that she forgets about social studies and enjoys her life. She is pretty and a bit selfish.
She is quite fond of herself and started VTuber activities to show her existence to the world.

Nazuna
Due to the coronavirus, movie theaters were closed and some people may not have been able to see the movie yet. It’s definitely a film you should see. Akai-san is very popular, but I think I prefer Heiji Hattori.