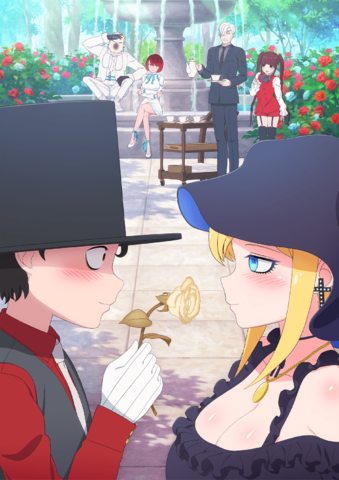 The TV anime “Shinigami Boy and the Black Maid” will be broadcast on TOKYO MX, Yomiuri TV, and BS11 from July 4, 2021. In addition, additional cast members such as Yoshitada Otsuka and Inori Mizuse, as well as a new key visual, have also been revealed.

Shinigami Boy and the Black Maid” is a comic by Inouye that is being serialized on the comic distribution site “Sunday Ueburi”. The total number of copies sold has surpassed one million, and it is a popular work that is also attracting attention on SNS.
The story is about a boy who is rejected by the people around him due to a curse and spends his days in solitude, and the maid who serves him, Alice. The story depicts a romantic comedy between “Botchan,” who is troubled by Alice’s reverse sexual harassment, and Alice, who is always on the edge of seduction.

Five additional cast members have been confirmed. Yoshitada Otsuka will be playing Rob, the butler who serves the boy and has been taking care of him since he was kicked out of the main house. Inori Mizuse will be playing Viola, the younger sister of the boy who is interested in sweets and love.
Wakana Kuramochi plays Kafu, a half-human, half-witch girl. Hiroshi Kamiya plays Zain, a wizard with a head like a bird who loves women and picks up any girl he meets, and Yuma Uchida plays Walter, the younger brother who has a rivalry with the boy.
The cast has arrived with comments of enthusiasm.

In addition, the key visual of Bocchan and Alice facing each other with blushing cheeks and the PV were also released, in which the OP theme “Full Moon and Silhouette Night” sung by Bocchan (CV. Natsuki Hanae) and Alice (CV. Ayumi Mano) and the ED theme “Nocturne” sung by Alice were unveiled for the first time. The OP and ED are scheduled to be released as double A-sided singles on July 28th.

The TV anime “Shinigami Boy and the Black Maid” will start airing on TOKYO MX and other stations from July 4, 2021 (Sun).

|Shinigami Boy and the Black Maid cast and characters

I love you, but I can’t touch you.
This is a charming work with a sad and fragile love story.
It is always heartbreaking to see them interact with each other, confirming their feelings for each other while being tossed around by Alice.
My character, Viola, is the younger sister who enters into the relationship between the two.
Please look forward to Viola’s facial expressions!

My name is Wakana Kuramochi, and I will be playing the role of Kafu.
When I read the original story, I felt that “Shinigami Boy and the Black Maid” is a wonderful story filled with various things such as someone’s feelings for someone, the desire to protect someone important, family, friends, and colleagues.
I will do my best to convey the charm of Kafu-chan, who is straightforward, lovable, and sometimes even cool.

When I was asked to be the voice of Zain, I read the original story in one sitting!
The innocence of the little boy and Alice was heartwarming!
The combination of Inouye’s original story and Yamakawa’s art is superb, and the dark, pure, and beautiful world of the original story is clearly and vaguely reproduced with digital technology.
Please look forward to the anime version of “Shinigami Boy and the Black Maid”!

I’m Yuma Uchida, and I’ll be playing the role of Walter. This is a story about a sentimental little boy and a funny maid. I think that the sadness that lies underneath the actions that make us chuckle is the charm that attracts us.
I’m really looking forward to seeing how this story will come to life in animation. Please take a look at “Shinigami Boy and the Black Maid.

Nazuna
A lively daily life with a cursed boy who “kills what he touches”, Alice, a maid who serves him, and friends. And whereabouts of their sad love? It is still undecided whether there will be a broadcast on Crunchyroll, but if it is broadcast, I definitely want everyone to see it ♪