What is the appeal of “Uma Musume Pretty Derby”? 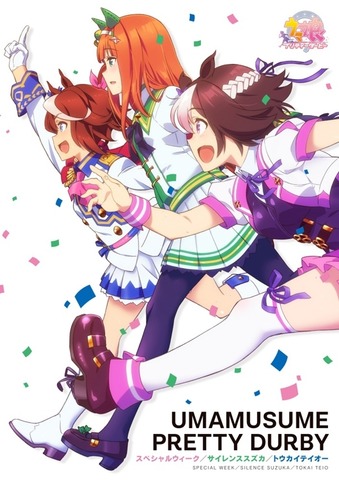 Uma Musume Pretty Derby” is an anime that is rapidly gaining attention on the Internet. What kind of charm does this work have? Now that the final episode has been aired and the grand finale has come to an end, I would like to introduce its charms once again now that it is being rebroadcast on BS11 and other channels.

Uma Musume Pretty Derby” is an anime that is rapidly gaining attention on the Internet. What kind of charm does this work have? Now that the final episode has been aired and the grand finale has been reached, I would like to introduce its charms once again now that it is being rebroadcast on BS11 and other channels.

Uma Musume Pretty Derby” is a media mix content that originally started in 2016, centered around an app game for smartphones. As one of them, the anime started airing in April 2018.
After the first episode of the anime aired, the number of viewers on the internet gradually increased, probably due to the appeal of the work, and it became a hot topic for spring anime.

|The cuteness of the character and the affinity with the model racehorse.

In this game, real racehorses are “personified”. Other racehorses that have appeared in the game include Simbo Rildorf, who led the horse racing boom, as well as Naritabu Ryan, Silence Suzuka, Tokai Teio, and many others that even horse racing fans have heard of.

If you are familiar with the racehorses they are modeled after, you will be able to see at a glance that their costumes, accessories, personalities, and characteristics have been meticulously recreated.

Of course, even those who aren’t interested in horse racing can enjoy this game, as it is a coming-of-age story about a group of Uma Musume (girls) who are enrolled in a training school called Tresen Gakuen.

|From historical fact to the world of IF

From the fourth episode, the world begins to unfold, little by little, differently from the historical facts. Fans who have been able to predict the order of the races until now are excited about the new developments.

The descriptions of the other racehorses that fought fiercely against Special Week in the actual race are wonderful, but the overwhelmingly strong El Condor Passer, who did not participate in the race, runs like a monster bird in this race as well.
This is a battle between the hero and the heroine, who has worked hard to overcome setbacks. It’s going to take a turn that no one can predict!

|The unique charm of anime

The main attraction of this game is the racing!
With the sound of hooves echoing in the background, the description of the race, full of a sense of gallop as the horses race against each other, draws you in at once.
The scenes of the horse girls accelerating with boosts, entering the slipstream, and the race tactics, etc., give the viewer a sense of realism that only anime can provide.

The most impressive part of the story is the race in the last episode. In this work, anthropomorphic racehorses run, so at first glance, it looks like a powerful track and field competition.
However, in the last episode, after the race and in the latter half of the race, the description of the race looks, for a moment, as if a racehorse is running.
The images that showed the beautiful, flowing bodies of the horses were captivating.

Also, the moment you pass the horse girls who are running with you, they always say “Muri~”, which is not only breathtaking but also allows you to relax your shoulders just enough, which may be one of its charms.

|Development that can be seen only because it is IF

The balance between the historical reenactment and the IF world, which I mentioned as the appeal of this work, will excite horse racing fans and give them excitement and excitement that will captivate even those who have not seen this work before. It is also a work that gives you the pleasure of researching the history of horse racing and wondering what it was really like.

Particularly noteworthy is the Silence Suzuka episode in the 7th R (Episode 7). It’s a shocking race with a memorable quote from the commentator, “Silent Sunday. You can see how that race is represented in the anime, and what happens afterward at ……. This is a development that everyone should see, whether they know it or not, so please take a look.

|From admirer to rival. And then…

So far, I have described the appeal of this work from many aspects, but if I had to pick one, it would be the relationship between the main character, Special Week, and her admirer, Silence Suzuka.

From the 8th episode onward, the relationship between the two that had been building up until then changes at an accelerated pace.
As their circumstances and feelings for each other intersect, the presence of their trainers, teammates, and families lead them to an ideal relationship.

As we move into the second half of the story, we can’t help but root for the girls as they constantly think of each other, or rather, try to develop themselves because they do!

|The strongest showdown anyone has ever dreamed of!

Among the many races, the race in the last episode (episode 13) will be a dream come true for the fans who have watched it so far and for horse racing fans.

What kind of performance will the strongest horses in the race and the horse girls who have given us so much excitement give us?
This race is the perfect stage to get everyone who has been watching “Uma Musume Uma Musume Pretty Derby” excited.

Special Week, who came to Tokyo with the goal of becoming the best in Japan, the strong opponents with whom they have fought together and developed a strong bond, and Silence Suzuka, who has gone from being an admirer to a rival.

To whom will the wine of victory be given?
We hope you enjoy the best race of this title!

Nazuna
This work is not only cute because of its “anthropomorphism”, but also because of the deep knowledge of its models and the success in sublimating it into an animation work and into entertainment.