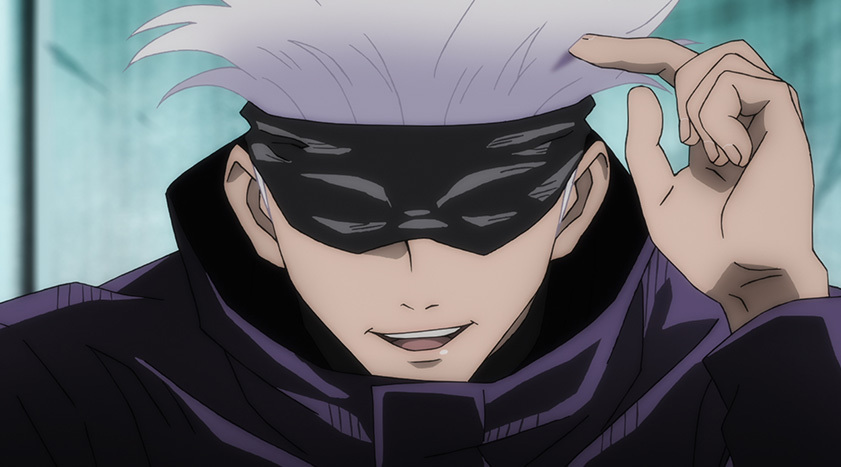 Both the manga and the anime are doing very well, and the international reputation of “JUJUTSU KAISEN” is fantastic!

Among them, Satoru Gojo, who is popular as the strongest character, has a lot of great sayings and lines with his unique phrasing.

So this time, we’ve compiled a list of the best quotes and lines of Satoru Gojo from JUJUTSU KAISEN.

If you read this article, you will be fascinated by the richness of Satoru Gojo’s expressions and will be able to enjoy JUJUTSU KAISEN more deeply.

■My best friend. My one and only.

In the last episode of volume 0 of the book, he says to Okkotsu Yuta after he kills his best friend “Getou Suguru” with his own hands.

Getou Suguru was the only person in their relationship that they recognized and understood each other.

Even after killing so many people and becoming the grandmaster of spells, he was still a very important person to Gojo.

Even if he committed crimes, he must have felt that Getou’s unchanging faith and kindness remained at the root.

However, when I think of Gojo’s state of mind that he had no choice but to kill Getou, it makes me feel very sad.

■“But it seems I can’t be strong enough.

This is the line that Gojo releases after being reunited with the missing Getou and being told of Getou’s feelings in volume 9, episode 78.

Gojyo did not notice Getou’s suffering and could not understand when he was told of Getou’s crime.

Up until now, Gojo has been solving problems with his own strength that overwhelms others.

However, he realizes that there are some things that cannot be managed by his own strength alone.

This may have had a significant impact on Gojo’s thinking as he became a teacher.

In the second episode of the first volume of the book, it was said to Itadori, who was worried about Gojo’s request to take over for Sukuna.

At that time, Itadori didn’t know who Gojo was, so she had no choice but to trust his words.

However, he was soon shown that these words were true.

It’s really amazing that Gojo can say with such confidence that he is “fine” with Sukuna, who is a special class student.

It’s very reassuring to hear such a reliable word from the strongest teacher.

■We’re not allowed to take youth away from young people, no matter how many of them there are.

In the second episode of volume 0 of the book, he mutters something to the upper management that is trying to push for Okkotsu’s death penalty.

From these words, we can see that Gojo cares about his students very much.

As with Itadori, without Gojo’s encouragement, Okkotsu would have been executed immediately.

No matter what the situation, he respects the potential and future of young children and watches over them and nurtures them.

He may be aloof in front of his students, but he is a wonderful teacher with a passionate heart.

In volume 8, episode 66, Gojyo’s words to Natsuyu, who is wary of the “Q” group of spellcasters.

While Getou seriously analyzes the contents of the mission and lists the points to be wary of, Gojo just uses this word.

The fact that he says “we” instead of “I’m the strongest” shows his trust in Getou.

Getou also advises Gojo to change his first name to “I” or at least “Boku” at this time.

At this point, he refuses, but later on, he starts referring to himself as “I”.

■Shall I kill all the people upstairs?

In volume 2, episode 10, Ijichi is angry at the upper management for sending the first-year students on a special class mission to get rid of Itadori.

The way Ijichi is frightened shows that Gojo is serious.

Gojyo has a deep-seated disdain for the upper echelons, describing them as “a bargain sale of rotten tangerines,” “the cave of the witchcraft world,” and “hereditary fools.

The fact that one of his students died because of the upper echelons of the school is really upsetting to Gojo, isn’t it?

If Itadori hadn’t come back to life after this, what would he have done?

This is what he said to Fushiguro Megumi, who is training against Gojo, in volume 7, episode 58 of the book.

Fushiguro’s abilities and skills are on par with Itadori’s, but he can’t seem to get serious.

He warns Fushiguro that it is important to work together with others, but when you die, you must do it alone.

The way he encourages her to be more greedy shows Gojo’s seriousness in trying to raise Megumi to be a strong sorceress.

In the 15th episode of the 2nd volume of the book, he suddenly appeared in front of Jogo and attacked him.

This is the first time I’ve ever seen such a thing.

For Jogo, who came here with the intention of winning, the difference in level is shocking.

Itadori, who had been forced to observe the match, thought that the difference in power was so great that it made him feel like he was a different kind of creature.

In the 32nd episode of the 4th volume of the book, Gojo says something to Fushiguro and Kugisaki, who think Itadori is dead, when he reunites them with Itadori who has come back to life.

Itadori was brought back to life and reunited with Fushiguro and Kugizaki, who thought Itadori was dead. Gojo’s direction was to make Itadori appear in a surprise box to the two depressed people who had lost a friend of the same age.

To be honest, as a teacher, this is not a praiseworthy gesture, but I wonder if Gojo was trying to make the reunion a cheerful one.

However, according to the author, Gojo has a bad personality, so there is a possibility that he was just in a bad mood…

■Don’t get me wrong, for me, it’s as much of a coincidence as being asked to take a survey in town.

In volume 3, episode 18 of the book, this is what he said to Yoshinobu Gakuganji, who was working hard for Gojo after he fought with the special class spell spirits “Jyouko” and “Hanamyo”.

The fact that he compares it to a survey in the town shows how bad Gojo’s character is (laughs).

(laughs) For Gojo, it’s probably more like “I’ve taken up a little time.

It was such a disaster that the president of the Kyoto school, Gaganji Yoshinobu, said it was a disaster, but Gojo is a master at making it end with a small happening.

■You have to be strong enough not to leave me behind.

This is a phrase from volume 9, episode 79 of the book.

It was uttered after a rather nasty conversation with a first grader, Fushiguro Megumi.

He already had high expectations for Fushiguro from this point on.

I was impressed by the way she looked down after she said the words.

Maybe he had something on his mind.

Fushiguro may have been a “bad guy,” but in the end, he learned under Gojo and came to trust him.

This is a precious scene depicting the encounter between Gojo and Fushiguro.

■My soul denies it.

This is the phrase that is released in volume 11, episode 90 of the book, when he is grabbed by the prison guard used by Getou.

In front of his former best friend, Getou, even his six eyes recognize him as the real thing, but his soul cannot accept him.

Such a conflict is expressed in his words.

It could be said that Gojo’s true strength lies in his spirit (soul) rather than his body (sixth eye).

■Well, we’ll figure it out. I’m counting on you, guys.

It’s a phrase that he mumbles in the prison ward in volume 11, episode 91 of the book.

It’s a line that expresses the mental toughness that allows him to remain optimistic despite being sealed up and in a desperate pinch.

As I release this line, I think of Itadori, Fushiguro, and Kugisaki, the three teachers.

The line also implies that he trusts them, thinking that they will be able to handle it.

I wish I could be as calm as this when I’m in a pinch, which comes several times in my life.

Nazuna
This time, we have picked up some of the best quotes and lines of Satoru Gojo from the popular manga “JUJUTSU KAISEN”. I hope you will enjoy the Gojo’s unique phrases that fascinate readers.