New facts in the PV of the summer anime “When They Cry Graduates”…! Shudder at Satoko’s words. Is Lena inheriting her memories? 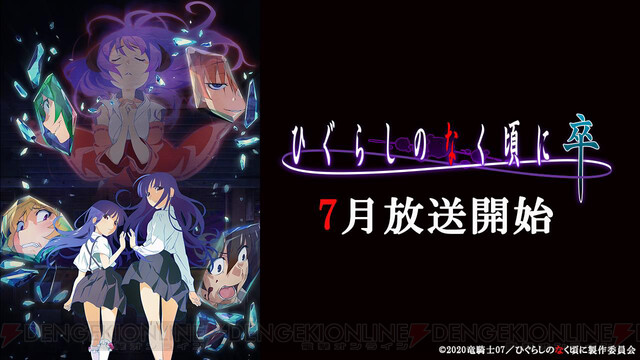 The sequel to the anime “When They Cry”, which reached its final episode in March this year, “When They Cry Graduates” will start airing in July. Fans are shocked by the words that Satoko released in the PV. There are a number of other things to be concerned about: ……?

When They Cry”, an anime that started airing in 2006, is a popular feature-length work that depicts “tragedy” and “bonds” centered on “Oyashiro-sama’s haunting” that occurs in Hinamizawa Village, where the main character Keiichi moved in.
A new work, “When They Cry,” will be aired from October to March 2020. In July of this year, “When They Cry Graduates,” the answer to “Karma,” will be aired, and many fans are looking forward to it, saying, “I can’t wait! Many fans are looking forward to it.

The other day, on May 20, the PV for the game was released, and at the end, Satoko said something that made “When They Cry” fans shudder: ……!

|Satoko is using Rena? A lot of people are saying, “I never thought she’d go this far…

In “Karma”, Satoko did everything she could to make Rika stay in Hinamizawa.

Satoko’s plan may have failed due to some “unexpected” action by Rena.

Also, is it Satoko’s fault that Rena developed the Hinamizawa Syndrome in the “Demon Deception Arc” of “Karma”? It will be interesting to see what the answer to this question will be.
Some people seem to think that Satoko seduced Rena and made her inject herself with H173, which causes Hiyorimi syndrome.

|When They Cry Graduate” PV Vol. 1

|Does Lena have memories of the “atonement chapter”? Did Satoko confide in her about the loop?

When “Demon Deception Arc” was aired, the term “hard work story” was used to describe the old “Sin Ruins Arc” in which Rena also developed the Hinamizawa Syndrome, which led to the theory that the two chapters were linked.

The PV for “Graduation” is very similar to the “Sinpuku-hen” PV, with Rina and Teppei cheating on Rena’s father.
Some people are almost convinced that Rena in the PV is in the “Oni-Deceiver Arc” and that the two chapters are connected.

In “The Gathering,” it was revealed that “other people besides Satoko and Rika can carry over their memories from before the loop,” so it’s possible that Rena has memories from the “atonement arc” and used them to …… Rina and Teppei. It is possible that Rena has memories of the “Atonement Arc” and used them to kill Lina and Teppei.
She may have heard from Satoko that they are actually in a loop and what happened to Rena’s house in “Sinpuku-hen.”
Otherwise, the promise of “making you happy in that world” would not be convincing. Incidentally, Teppei, who had bullied Satoko, changed his mind in “Karma” and became popular as “SSR Teppei,” but his expression became vicious again in the PV. But in the PV, his expression was vicious again, causing some fans to cry out, “Give me back my beautiful Teppei!

However, there are some people who say that “Teppei in the PV is probably before he changes his mind, so he hasn’t given up hope yet”, and it seems that Teppei will be a topic of conversation again in “Graduation”.

|The OP of “When They Cry” is Ayane! Higurashi album also released!

The opening theme for the anime “When They Cry,” scheduled to air from July 2021, will be “Analogy” by Ayane. In addition, an album containing many of the past When They Cry songs sung by Ayane will be released on July 28th.
When They Cry” is the latest anime version of the “When They Cry” series.
The original “When They Cry” and “When They Cry” are doujin novel games released between 2002 and 2006. The story is about a mysterious incident in Hinamizawa village, far away from the city center, and is told with time loop elements.

The original doujin game became very popular and was adapted into a manga, a novel, a consumer game, a live-action movie, a pachinko game, etc. In 2006, an anime version was broadcast, which was also a hit.
The TV anime “When They Cry” will be aired on October 1, 2020. Rika Furude, who was supposed to have reached the best result and ended the loop, gets caught in the loop again. At the end of the episode, it turns out that it was Rika’s best friend Satoko Hojo who was causing the loop this time. The story continues to “Graduation.”
The theme song “Analogy” (lyrics by Ayane/composed by Chiyomaru Shikura) for “When They Cry” will be sung by Ayane.

Nazuna
Finally, “When They Cry”, the answer to “Karma”, will be aired in July. The biggest shock in the history of “Higurashi” may be waiting for us.