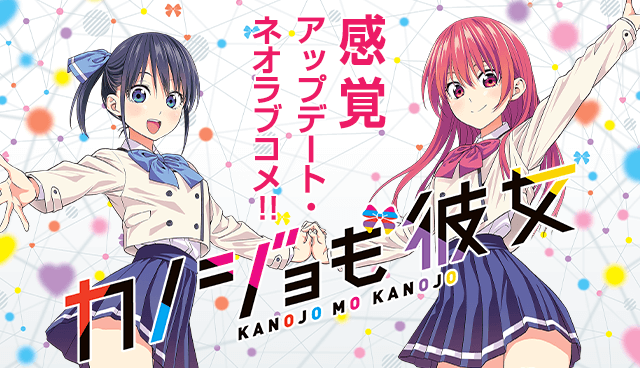 The TV anime “Kanojo mo Kanojo,” based on the popular manga by Hiroyuki, which is currently being serialized in Kodansha’s “Weekly Shonen Magazine” and the 4th volume of the comic was released in January, will start airing on July 2nd, 2021 at 2:25 am on MBS and TBS, and at 3 am on BS-TBS in the “Animeism” slot!

This is a new-style neo-standard romantic comedy that depicts the relationship between a boy and two girls: the main character Naoya Mukai (Naoya), a first-year high school student, his girlfriend Saki Saki, and Nagisa Mizuse, who confesses her feelings to Naoya.

The film is directed by Kuwabara Satoshi (Bride of the Fifth Class / Adachi and Shimamura) and produced by Tezuka Productions.
The cast includes Junya Enoki as Naoya Mukai, Ayane Sakura as Saki Saki, Azumi Wake as Nagisa Mizuse, Ayana Taketatsu as Rika Hoshizaki, and Rie Takahashi as Shino Kiryu.

The sequel to the anime “When They Cry”, which reached its final episode in March this year, “When They Cry Graduates” will start airing in July. Fans are shocked by the words that Satoko released in the PV. There are a number of other things to be concerned about: ……?

When They Cry”, an anime that started airing in 2006, is a popular feature-length work that depicts “tragedy” and “bonds” centered on “Oyashiro-sama’s haunting” that occurs in Hinamizawa Village, where the main character Keiichi moved in.
A new work, “When They Cry,” will be aired from October to March 2020. In July of this year, “When They Cry Graduates,” the answer to “Karma,” will be aired, and many fans are looking forward to it, saying, “I can’t wait! Many fans are looking forward to it.

The other day, on May 20, the PV for the game was released, and at the end, Satoko said something that made “When They Cry” fans shudder: ……!

The protagonist, Naoya, is a first-year student at a university.
He tells Saki he’s been in love with her
succeeds in getting her to become his girlfriend. He is at the peak of happiness.

But then a beautiful woman, Nagisa, starts to talk to Naoya.
He suddenly asks Naoya to go out with him and make him the White White White.

Naoya is upset by Nagisa’s too good to be true, and makes a decision…

A neo-standard romantic comedy that starts with an unexpected choice!

A first-year high school student. An extremely serious person. So serious that he can’t lie to himself. He has been confessing his feelings for his childhood friend, Saki, at the pace of once a month since he was in the first grade, and finally started dating her in high school. Favorite food: bananas Birthday: December 31st

First year high school student. Naoya’s childhood friend and first girlfriend who is cheerful and energetic. When Naoya makes the impossible suggestion, “Can I play two games with you? Naoya asks her if it’s okay to double-cross her, and she reluctantly agrees. Her nickname is Sakisaki. Favorite food: Parfait Birthday: April 13th

Turkish girl who is also a first-year student at a high school. Her beautiful appearance makes her very popular with the boys at school. Without telling her parents or school, she also works as a popular TV producer called “Mirika,” and has a lot of money, even for a high school student. She is a tsundere. Favorite food: hamburgers Birthday: August 1st

A first-year high school student. She is smart and has the highest grades in her grade. Saki’s best friend and a member of the basketball team. She is concerned about the relationship between her dear friend Saki and Naoya. Favorite food: Saba no Bohzushi Birthday: November 25th

[Announced as a TV animation]