Why are stories about motorcycles and high school girls so popular? Super Cub” and “Yuru-Can△” depict the “connection. 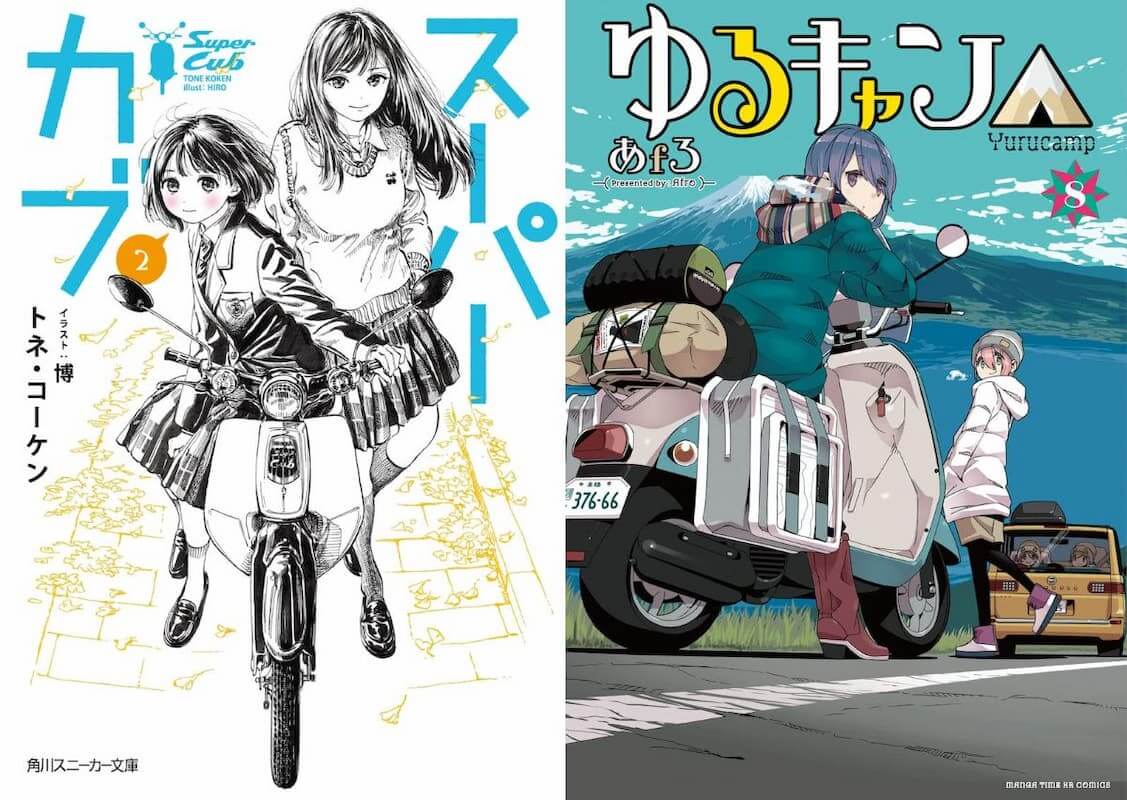 If you ride a motorcycle, you can go faster. You can go farther on a motorcycle. The first thing that comes to mind when I think of the appeal of motorcycles is that they also bring about a connection with someone or something in addition to their convenience. In addition to such convenience, the appeal of motorcycles as an existence that brings a connection with someone or something comes to mind.

A high school sophomore named Oguma, who lives alone in an apartment after her father dies and her mother runs away, becomes interested in motorcycles when she is overtaken by a moped scooter on her way to high school bicycle. She becomes curious about motorcycles when a moped overtakes her on her way to high school. I wondered. Oguma buys a Super Cub at a meager price with the money he has saved up through his scholarship with this thought in mind. This is the beginning of the story “Super Cub.”

Riding the Cub made his commute to school easier. I was happier than I had been yesterday, and I felt lighter on my way to class. It was not a small change for Koguma, who was going back and forth between his apartment and school with no prospects for the future, but it brought about a dramatic change.

Reiko, a beautiful girl who stands out in the class, came to talk to Oguma. Reiko was also riding a red MD90 called a postal cub. The interaction with Reiko, which was born out of the connection of riding the same Cub, made Oguma, who had been casually living his daily life, do something unprecedentedly reckless. When he first bought the Cub, he was only able to pedal as fast as a bicycle. Still, to participate in the school trip again, he misses the departure bus due to health problems, so he rides the Cub from Yamanashi Prefecture to Kamakura in Kanagawa Prefecture.

The reason why Oguma took up the challenge of this long-distance ride, which Reiko had said was dangerous, was probably because he had been inspired by Reiko’s attempt to climb Mount Fuji in the summer on a postal cub. She felt that she could do something herself. She wanted to show Reiko what she could do. It was a challenge born out of the connection with Reiko that the turnip brought about. In Kamakura, he knew it was against the law to put Reiko on the back of his turnip and drive around the mountain passes because he wanted to preserve the connection with her. Of course, it is forbidden to imitate him, but I would like to understand that it was an impulse of joy that came from Oguma, who until then had been less connected than most people.

In Makoto Shinkai’s animated feature film “The Weather Child,” there was a scene in which Natsumi’s pink turnip raced through the streets of Tokyo with Houtaka on the back, who had fled the police station to go save the heroine, Yona. Despite the parade of legal violations, a replica of the pink Cub was made and sold by Honda. Honda did not allow the violation of the law. The same is true for the “Super Cub,” for which Honda cooperated and supervised. In the real world, rules are absolutely observed. Nevertheless, the fact that Honda is collaborating in a work where the law is undermined may signify that they want people to understand the potential that motorcycles have to connect us to somewhere and someone else.

In “Super Cub,” Shii Ebiwa, who used to ride an expensive Alex Moulton bicycle, joined Reiko’s team, put her on the back of his newly purchased Hunter Cub, and the three of them, along with Oguma, rode from Nakasendo to Kyushu via the Sea of Japan. This is another example of the glimmer of a relationship created by a relationship connected by a motorcycle.

Now that I was connected to someone, there was no going back. When he went to university and started living alone in a rented house instead of living in a dormitory where bikes were not allowed, he suddenly felt lonely. If he had been riding his bike to high school, he would have been able to ignore this feeling, but he was afraid of it because of the connections he had made through the Cub.

At the university he went to, Oguma met a new person. What is the purpose of the beautiful woman who runs a dubious club that calls itself the “Savings Study Group” and the girl who works for her? In this seventh volume, which is even more thrilling than ever, the turnip becomes a nexus that connects Oguma to someone new and something fresh. What kind of days lies ahead? The story of “Super Cub” holds the reader in place, and the only way to find out is to follow the path it takes.

The appeal of traveling by motorcycle is also depicted in “Yuru Camp,” which is the key to the recent camping boom. Shima Rin, a high school girl who likes camping solo, starts going camping with Nadeshiko Kakamigahara, who rescued her from the near-disaster, and gradually gains camping friends. The story is viral as it conveys the appeal of camping, from transportation to setting up, cooking, to exploring.

As the story unfolds, Rin gets her moped license and starts riding her Yamaha Vino scooter to go camping. While his friends are traveling in a minivan, Rin is the only one who crosses the border from Yamanashi Prefecture to Shizuoka Prefecture on the Beano to get to the campsite. Along the way, Rin visits shrines and temples and walks along the coastline. The motorcycle gave her the freedom to go wherever she wanted, whenever she wanted.

Eventually, Rin and her friend Ayano Toki, who lives in Hamamatsu City, also go on motorcycle touring camping trips. Her range of activities has expanded, and the number of friends she goes out with has also increased, probably because the bike has created a connection to faraway places and someone else. The more I see her, the more I think that having a motorcycle might change things like a small bear.

Ayano’s inability to stand on her feet after riding long distances and Lin’s attempt to keep out the cold by installing a windshield on her Yamaha Vino that her grandfather gave her in winter show that motorcycles are not all fun and games. Super Cub” also depicts the difficulties of riding a motorcycle in winter in many ways. Nevertheless, if there is a joy and a connection from having a motorcycle, I would definitely want to ride it, and I would want to ride it.

Nazuna
It is very cool and admirable to see a pretty girl riding a motorcycle and doing long jumps. Maybe I’ll get a motorcycle license too.