Kingdom Exhibition: Shin” opens today! Actor Kento Yamazaki will visit the exhibition before it opens! A message from the author, Yasuhisa Hara, has also arrived! 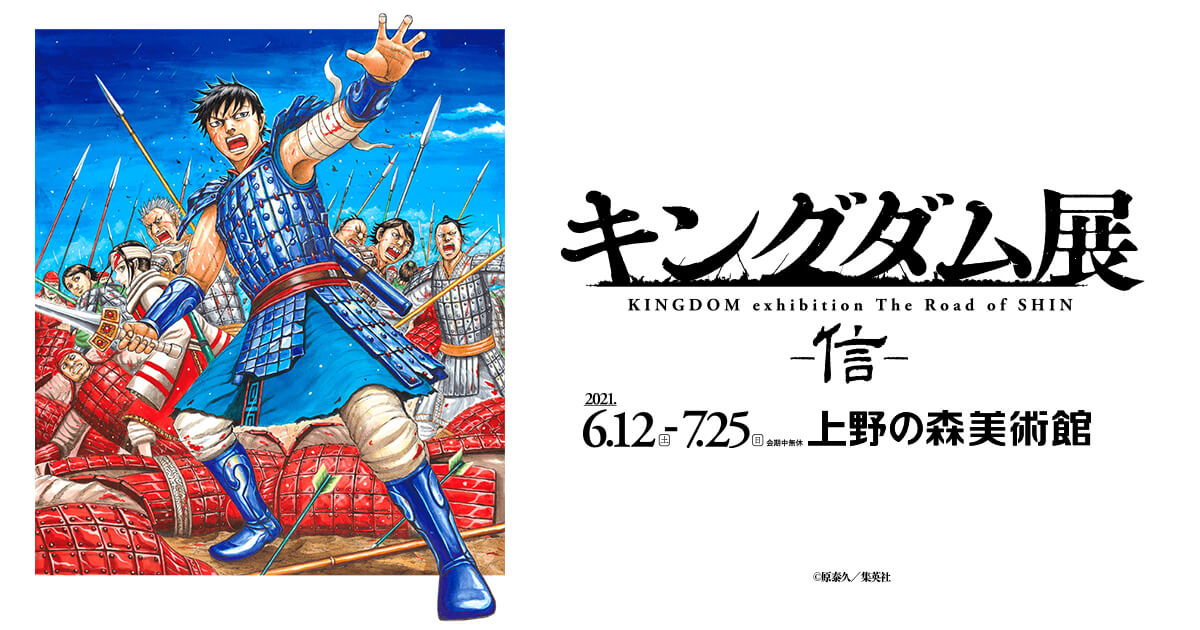 Kingdom: Shin,” an exhibition that allows visitors to experience the overwhelming power and excitement of “Kingdom,” the popular manga serialized in “Weekly Young Jump” (Shueisha), opened at the Ueno Royal Museum in Tokyo on Saturday, June 12 (until July 25. The exhibition is scheduled to tour nationwide, including Fukuoka City Art Museum.

This exhibition is a reconstruction of the story of the main character Shin, who grows up through encounters and partings with friends and enemies from the first episode “The Boy of No Name” to the 438th episode “The Time of Flying” from the 15 years of the series, under the full supervision of the author Yasuhisa Hara. More than 400 original handwritten drawings and about 20 illustrations drawn for this exhibition will be on display.

◆Message from Yasuhisa Hara, the author, on the opening of the exhibition

The artist Yasuhisa Hara, who supervised the entire exhibition, sent us a message on the opening of the exhibition.
I am very happy to be able to finally open the exhibition. This exhibition is designed to allow visitors to experience the story of Makoto in a “space”. We hope that visitors will enjoy a different experience from reading the original comics by viewing the original drawings, new paintings, and huge graphics together. Since there are so many works on display, I hope people will visit the exhibition more than once lol.

This is an unprecedented exhibition of original artworks on a scale never seen before.
Please come and enjoy the huge illustration of the Qin Dynasty general Wang Qi, which measures 3 meters in height and 1.5 meters in width, as well as the powerful and realistic original drawings, graphics, and sounds of the Battle of Hankiguan, in which the Qin Dynasty was invaded by five countries simultaneously.

※Please note that the content of the event is subject to change without notice.

The time is B.C., the Spring and Autumn Warring States Period in China.
In this era of great warfare that has lasted for over 500 years, there is a young king who aims to unify China and a servant who aspires to become the greatest general in the world. The dreams of the two boys lead to a grand future that no one knows yet, involving the fates of seven countries and the lives of over 300 characters. The unification of China. A blockbuster historical comic depicting the most unending battle in history.

Began serialization in Weekly Young Jump in 2006, with 61 volumes already published and a total circulation of over 80 million copies (including electronic versions).
Winner of the 17th Osamu Tezuka Cultural Award Manga Grand Prize.
The series is also overwhelmingly popular in “Weekly Young Jump,” and the TV anime and live-action movie have become major hits.
The third series of the TV anime is currently airing from April 2021, and a sequel to the live-action movie is also in the works.

Born on June 9, 1975. Born in Saga Prefecture. While at university, he drew a work that won the second prize at the 40th Chiba Tetuya Award in the Young Division. After graduating from graduate school, he got a job as a system engineer, but he couldn’t give up his dream of becoming a manga artist and left his job.
Later, in 2003, he won the Encouragement Award for “Ha to Sen” at the 23rd MANGA Grand Prix, the rookie award of Weekly Young Jump. In the same year, he made his debut with “Kongo,” which was published in “Young Jump Extra Edition Manga” Vol. 36.
Began serialization of “Kingdom” in the 9th issue of “Weekly Young Jump” in 2006.

Nazuna
Wait… The official visual book is a must-have for fans, so you should buy it… #I’m not sure what to make of it, but I’m sure it’ll be a great read.