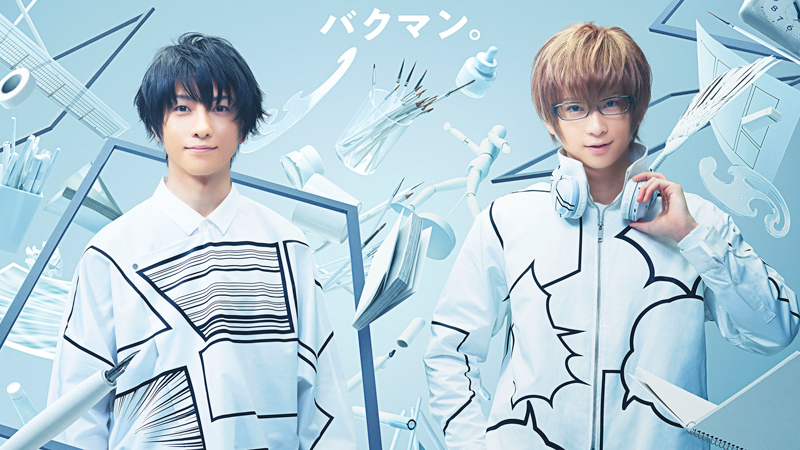 The stage adaptation of “Bakuman. The story is about two middle school classmates, Mashiro and Takagi, who write manga together and aim to become popular manga artists in Weekly Shonen Jump.

It was ranked 3rd in “Manga Grand Prix 2010” and 1st in “This Manga is Amazing! In 2015, it was made into a live-action movie starring Takeru Sato and Ryunosuke Kamiki, and now it is being adapted for the stage.

The reason why this work has become a hot topic is probably due to the cast that was announced along with the decision to make it into a stage production. Hiroki Suzuki will play the role of “Mashiro Moritaka,” who is known for his drawing skills and has won awards in drawing contests. Aramaki Yoshihiko will play Takagi Akito, a talented writer who has won awards for his book reports.

Suzuki plays the role of “Mikazuki Munechika” and Aramaki plays the role of “Yamabagiri Kunihiro”. Because of their close relationship in the film, when it was announced that Suzuki and Aramaki would be playing the lead roles, there was a huge response from the fans of “Swords Dance”. The relationship between Supremacy and Akito, played by Suzuki and Aramaki, transcends the boundaries of their works, and gives us a sense of “friendship” that is different from the original.

In “Bakuman.”, the best and Akihito join hands and struggle to become popular manga artists. However, there are no flashy action scenes like in battle manga or sports manga. How will the original work, which is often depicted in scenes of the characters having meetings or sitting at their desks writing manga, be presented on stage?

The film “Bakuman. is a scene in which Eiji Niizuma, the rival of Supreme and Akito, competes for the top spot in the Weekly Shonen Jump ranking. They fight with giant pens in their hands, wielding them as if they were weapons. The scene, depicted with wire action, is a brilliant action representation of the unseen competition for popularity.

The musical “Death Note the Musical,” based on the manga “Death Note” by Tsugumi Ohba and Takeshi Obata, the authors of the original story, also showed some ingenuity in its staging. A screen set up at the back of the stage was used to show the names of the characters as they were written in the Death Note by Tsuki Yagami, and in the scene where the spotlight was on L, a series of mathematical equations were shown to show his complex thought process.

Nazuna
This work is also expected to have a different emotional impact from the original work through various creative expressions unique to the stage. The “friendship” played by experienced and trustworthy actors, and the “effort” and “victory” expressed by the techniques of the stage arts will be different from the JUMP works that have been adapted to the stage so far.