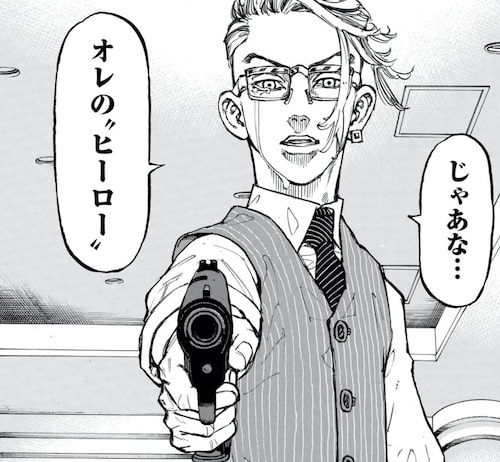 It’s hard to tell who he is at the beginning of the story, but it’s easy to imagine that he holds the key to the story.

Who is Kisaki, and what does he want?

Here, I will explain the true identity of Tetsuta Kizaki.

I’ve also summarized Kizaki’s relationship with Hinata Tachibana, his abilities, and his death.

Please note that there are spoilers in this article.

Today is the birthday of Shotaro Mamiya, who plays Tetta Kisaki🎂.
I can’t wait to see how Mamiya plays the mysterious man who got close to Mikey and transformed Tokyo Manjikai into a vicious organization!

|The fixer behind the “Tokyo Revengers.

In conclusion, Tetta Kisaki is the mastermind behind “Tokyo Manji Revengers”.

The mastermind here means the person who causes “the worst thing in the present age = Hina’s (Tachibana Hinata) death on July 1, 2017.

He alters the past history, but no matter how many times he changes the past, Hina will die in 2017.

But no matter how many times she changes the past, Hina will die in 2017 because Kisaki is killing Hina.

The reason why Kisaki kills Hina will be explained in detail in the section “The relationship between Tetta Kisaki and Hyuga Tachibana”.

Next, I will explain the background of Kizaki Tetta.

|A genius in elementary school

When Kizaki Tetta was in elementary school, he attended the same cram school as Tachibana Hinata (Hina), and they already knew each other.

This fact is revealed in episode 88, “Just gotta do”, but more surprisingly, Kizaki had excellent grades at that time, and was ranked first in the national mock examination many times.

Some girls avoided Kisaki because he was dark and creepy, but Hina thought he was a good boy and went home with him after cram school.

We can see that the elementary school Kisaki was not the kind of girl who would become a delinquent.

One day on her way home from cram school in the summer of her 6th grade year, Hina saw some junior high school boys bullying a cat in the park and protested, “Stop it! She protested.

Hina protested, “Stop it!” But the boys were older than her, so they made her cry.

At this time, Kisaki was only watching Hina, but suddenly a child jumped out and kicked the bad boy!

The child was Takemichi. Takemichi was beaten by the junior high school student, but Hina was impressed by the way he challenged his opponent even though he knew he would lose, and fell in love with him.

Hina’s love for Takemichi will have a big impact on Kisaki.

The rare bloom of the past

Aibi Aishu (Mobius) executive
Captain of the Tokyo Manjikai Sanbantai
in the past.

When he was kicked out of Toman after the Christmas battle in 2005, he approached Izana Kurokawa, became the general staff of Kersey, and initiated the Kanto Incident against Toman.

However, his plans are thwarted at every turn by Takemichi, who arrives from 2017.

In the present day, Tetta Kisaki is the acting president of Tokyo Manjikai (Toman).

In the present day after Takemichi’s sixth timely leap, he has established a dominant position in Toman by serving sleeping pills to Takemichi and Matsuno Chifuyu’s meals and shooting Chifuyu.

In the present time after the eighth timeliness, she was reported to be dead, but Izana Kurokawa, who has a good face with the police, prepared her body and disguised it, and Kisaki herself seemed to have fled abroad.

The present-day Kisaki is the actual ruler of Toman.

|Explaining the relationship between Tetta Kisaki and Hyuga Tachibana (Hina)

Fall in love with Hina.but

Sixth-grader Kisaki falls in love with Tachibana Hinata, who attends the same cram school, and is convinced that Hina will also fall in love with him,

However, Hina was fascinated by Takemichi, who challenged the junior high school students to save her.

After this, Kisaki begins to stalk Takemichi.

One day, Takemichi told his friend Takuya that

You know my hero! You know he’s a delinquent, right?

That’s why! When I become a junior high school student! I’m going to be the best delinquent in Japan!

He hears her talking about it.

Interested, Kisaki researches “delinquents” and meets real “delinquents,” and decides that she will become the real “best delinquent in Japan.

She makes a detailed plan and executes it, and even becomes the person in charge of Tokyo Manjikai.

|He tells Hina, but she rejects him and he is heartbroken.

However, Hina, who had always liked Takemichi, rejected Kesaki’s proposal.

Despite becoming “the best delinquent in Japan”, Kesaki couldn’t win Hina, and became her stalker.

The reason was to make her angry for being rejected.

After that, every time Takemichi changed the facts of his past and saved Hina, he killed her.

The reason why Hina had died so many times was because Kisaki kept killing her.

|Explaining the purpose of Tetsuta Nozaki

Kisaki’s objective
As explained earlier, Kisaki Tetta’s objective is to become the “best delinquent in Japan.

This is because Hina’s favorite hero for Takemichi is “the best delinquent in Japan”.

Kizaki begins to take action to become the “best delinquent in Japan,” and in the process, he arrives at Manjiro Sano (Mikey).

He felt that Mikey was capable of becoming the top delinquent in Japan, and started to make Mikey his puppet.

Obsessed with Mikey to achieve his goal.
She plots to kill Draken in the 8.3 war, and tries to get Mikey to kill Kazutora Hamiya in the “Bloody Halloween”.

He betrayed Budo and Chifuyu in the Holy Night Battle, tried to get Yuzuha to kill Shiba Taiju, and killed Emma on the day of the Kanto Incident, all to manipulate Mikey into doing what he wanted.

However, Takemichi, who has been time-released, stands in the way of these plans.

|Does Tetta Kisaki have the ability of Time-Lapse?

The fact that she said to Takemichi, “Do you still think I’m a Timelyper? (episode 184), which indicates that Kisaki is not a Timelyper.

However, there are two things that bother me.

After this, Kisaki is about to tell Takemichi who he really is, “I am…” (episode 184)
The fact that Kisaki asks Takemichi, “How many times have you done a time leap? (episode 183)
Kisaki seems to know that Takemichi is doing a time leap to stop his plans.

Although he does not have the ability to time leap, he may have some other ability or know some facts that others do not know.

He is good at manipulating people from the shadows to create a favorable situation for himself.

For example, Osanai of Mobius was surprised to find that when he listened to Kisaki who approached him, everything went well and he became the president of a motorcycle gang in Shinjuku in just one year.

Although Kisaku was just using Osanai, it is still a case that clearly shows that he is skilled in moving people.

Here is an explanation of the end of Kisaki’s life.

After being kicked out of Tokyo Manjikai after the Holy Night Decisive Battle, Kisaki approached Izana Kuroki of Tenjiku and soon became Tenjiku’s general boss.

He used Izana, who had a grudge against Mikey, to challenge Tokyo Manjikai to a battle.

Even before this, Kisaki had been planning to create a Tokyo Manjikai that would be convenient for him.

For that purpose, Kisaki sets up the Kanto Incident against Toman.

Kanto Incident against Toman, but he is defeated.
The day before the final battle, Tenjiku attacks Nahoya Kawada and Takashi Mitsutani, leaving them unconscious and in critical condition.

On the day of the final battle, he kills Emma and breaks Mikey’s heart.

In the Kanto Incident, Tenjiku has an overwhelming advantage in strength, but they are gradually outnumbered by a small but deadly force of Toman.

Kisaki was put on Handa’s motorcycle and escaped.

He died in a traffic accident after being cornered by Takemichi and others.

The final battle took place at the parking lot where Kizaki killed Hina in the present world.

Kisaki pointed the gun at Takemichi, but he took it back and escaped again.

However, while standing at a crosswalk, he is run over by a truck and dies (episode 185).

Although Kisaki did her best, she met an untimely end.

Nazuna
Have you seen the latest issue? I’m already too curious about the rest of the story. If I am not Kisaki is really a timely par… I wonder if it’s you, Hanma? I think so. What about you guys?