Resident Evil: Infinite Darkness” reveals many new cuts, including Leon in a suit! 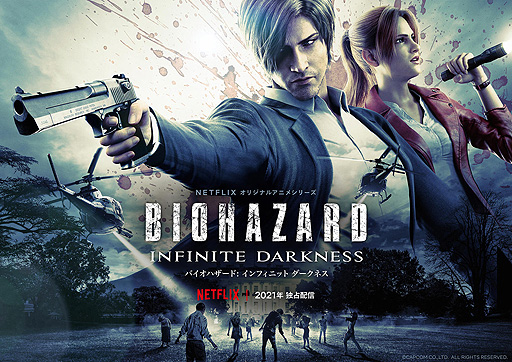 On June 17, 2021, Capcom released a new cut of the Netflix exclusive CG animated film “Resident Evil: Infinite Darkness”. It shows off the character’s suit and other features that will be shown for the first time in this film.

Resident Evil: Infinite Darkness” will be available on Netflix from July 8, 2021.

Leon and Claire’s biggest crisis yet! A “true horror” that no one has ever experienced before will be created! In a suit and leather jacket with a hint of adult sex appeal! It’s time to take a closer look at Leon S. Kennedy, one of the most popular characters in the “Resident Evil” series! New scene photos have also been released!

Resident Evil”, the milestone survival horror game series that has shipped over 110 million units worldwide, will be released as the first CG drama series, “Resident Evil: Infinite Darkness”, exclusively on Netflix from July 8, 2021.

The first “Resident Evil” game was released in 1996, and this year marks the 25th anniversary of the series. The story of this horror action game revolves around two popular characters from the “Resident Evil” series, Leon S. Kennedy and Claire Redfield.

Among the many characters that have appeared in the “Resident Evil” series, Leon is one of the most handsome, both inside and out, and is loved by many. He has a cool and calm personality with a strong sense of justice, and has been called “the most popular handsome man in the series”.

Not only does he age in line with the series’ timeline, but he has also gone through a lot of tough times, which has given him a more austere personality, and for fans who have been following the series, he has grown up with them.

New scene photos of Leon S. Kennedy, who exudes a mature austerity, have been released at once! He is both visually stunning and talented, and will captivate both men and women!

In this film, he is called to investigate a case at the White House and shows off not only his familiar leather jacket, but also his first suit. As soon as the visuals were released, there was a lot of anticipation on social media, with people saying things like, “It’s refreshing to see Leon in a suit,” “It was cool to see Leon in a work suit,” and “Leon looks so cool in a suit! “Leon’s work suit was great! The formal suit that fits his well-trained body gives him a different and mature look, and we can enjoy Leon’s more austere appearance as he turns 30.

In the scene photos released for the first time, we can see Leon’s mature and melancholic appearance. Eiichiro Hazumi, the director of the film, commented, “By depicting a young Leon with a strong sense of justice, and a Leon in the 2014 era of Resident Evil: Vendetta, who seems to have grown a little tired of the endless battles, and a Leon in 2006 in between, we put him in a slightly bitter position that is not black and white. I’m not sure what to make of it. Leon in a suit is an important symbol in the key visual, and I thought it was Leon who did it so well,” he said.

Leon has been taking on various missions with a sense of justice that is different from other characters and a strong desire to prevent similar tragedies from happening again, without caring about the other person’s position or gender. The “Leon character” that has attracted a wide range of fans so far is still alive and well in this film.

In addition, Leon is well known for his ability to maintain a delicate distance from various female characters in his previous works, showing a man with a sense of comfort. In this film, we can’t miss his relationship not only with Claire, whom he meets again after a long time, but also with a new character, the mysterious Asian beauty Shen Mei!

Six years ago (2000), a helicopter belonging to the U.S. Special Forces crashed during a military intervention in the civil war in Penamstan.

The U.S. Army’s “Mad Dogs” squadron, which was in the area of operation, went to rescue the survivors against the order of the command center to stand by, but the “Special Forces” had already been destroyed. However, the Special Forces were already destroyed, and the Mad Dogs, led by Captain Jason, barely escaped with their lives.

Later, they find out that the top-secret file is about a bioscience laboratory in Shanghai, and Leon and three other agents go to investigate in search of clues. On their way to Shanghai in a state-of-the-art submarine, they are suddenly attacked by a group of rat-shaped B.O.W.s, and find themselves in a tight spot.

Leon and Claire get closer to the unexpected truth and to the truth of the incident that started in Penamstan. In addition, they discover that a horrific revelation is imminent that will overturn the peace. ……

Nazuna
It’s definitely the champion of summer anime. I can’t wait to see it and I’m really looking forward to it!