Spoiler alert for the latest volume of “classroom of the elite”! Part2 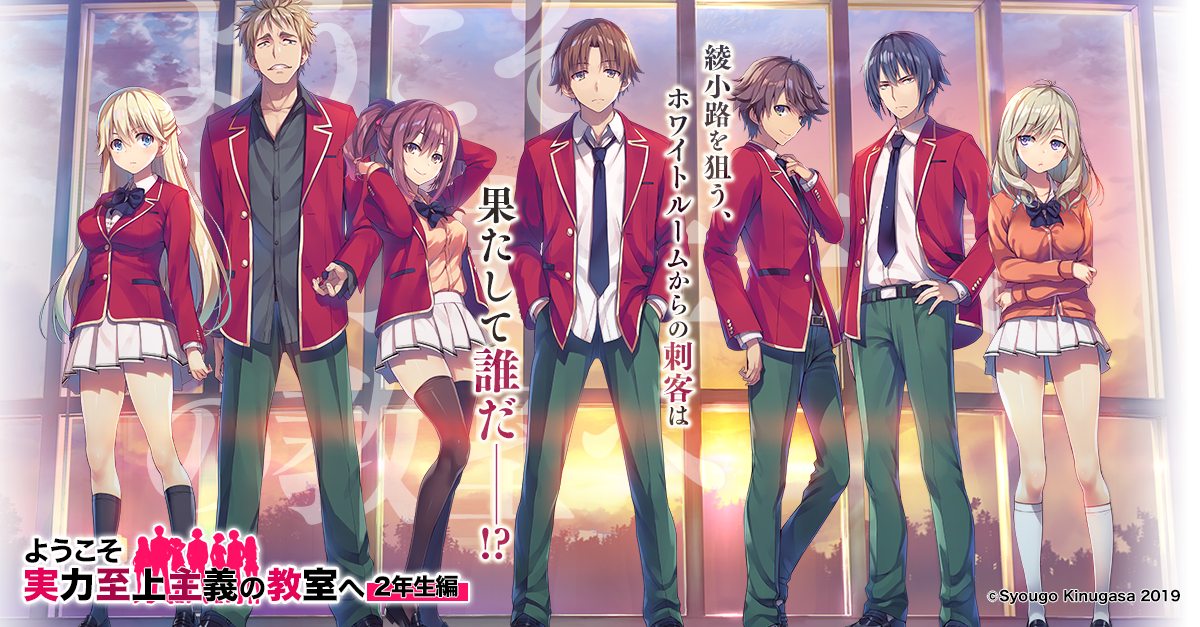 Classroom of the Elite” is a popular romance manga adapted into a manga and anime series. The story’s highlight is not only the cute heroines but also the enigmatic protagonist Kiyotaka’s brainstorming. In this article, I will explain in detail all 17 volumes of the manga with spoilers.

Kiyotaka and his friends are now in their second year after spring break. The new first-year students are full of individuality, and the secret love affair between Kiyotaka and Megumi is also noteworthy.

Kiyotaka and his friends, who were relegated to D class again after the last exam, are promoted to the second grade, and in April, the student council president, Nagumo, introduces a new application called OAA, which quantifies students’ abilities.

In April, the student body president, Nagumo, introduces a new app called OAA, which quantifies students’ abilities. Among the new students who enter the school at the same time as Kiyotaka and his friends are assassins sent from the White Room to expel Kiyotaka.

Without knowing the identity of the assassin, a special exam begins in which students are paired up with first-year students to compete for total points.

Hosen, a first-year student, plans to use his superior martial arts skills to overpower Suzune and Sudo and force Kiyotaka out of school. However, he is defeated by Kiyotaka’s physical prowess and all his tricks are in vain.

Thus, Kiyotaka succeeded in gaining the cooperation of Hosen and the first-year students he had been manipulating, and Class D eventually made it through the special exam.

■[Volume 2 Spoiler] Classmates learn of Kiyotaka’s abilities. …… Can Kiyotaka regain the trust of his classmates?

Kiyotaka and Suzune were competing against each other for the math score in the last exam. Suzune lost the game and ended up joining Nagumo’s student council.

As for Kiyotaka, he got a perfect score in a difficult exam, which made his classmates suspicious of him, wondering why he was hiding his ability.

Kiyotaka follows up with Suzune, Hirata, and Megumi, and his suspicions are once again confirmed. Also, the relationship between the Ayanokoji group, which had almost collapsed, is restored.

Later, just before the summer vacation, the students were notified of the desert island survival test that they had last year. This time, the students are informed that the test will be different from last year’s, as it will be a mixed test for all grades, and they begin to form their own groups with their own agendas in mind.

The desert island survival test has finally begun. Kiyotaka, who chose to work individually, completes the exam alone in order to earn points.

Then, Tsubasa Nanase, a first year student, approaches Kiyotaka and the two decide to work together. However, on the last day of their survival life, Nanase finally reveals his true nature.

She changes her first person from “I” to “Boku” and takes the name of the son of a butler who was driven to suicide by Kiyotaka’s father for helping Kiyotaka enter school.

Kiyotaka sees through Nanase’s self-suggestion that she is pretending to be that person. In fact, Nanase, who was his friend, harbored a grudge against Kiyotaka after his suicide attempt.

Disheartened by the revelation, Nanase apologizes to Kiyotaka for his resentment and offers to drop out of school, but Kiyotaka refuses. However, Kiyotaka refuses and makes her promise to cooperate with him in the future.

|I can’t stop the thrill of fighting in a society where merit is supreme!

Nazuna
Welcome to the Classroom of Competence Supremacy,” a popular novella that has been adapted into a manga and even an anime, features the process of the main character Kiyotaka gradually revealing his true nature and the head-to-head battle with the other classes. I can’t wait for the sequel to the second year chapter, which is expected to reveal the assassins from the White Room and other details. If you’re interested, please take this opportunity to read it.