Spoilers for “Blue Period” up to the latest episode! An art-fueled coming-of-age story 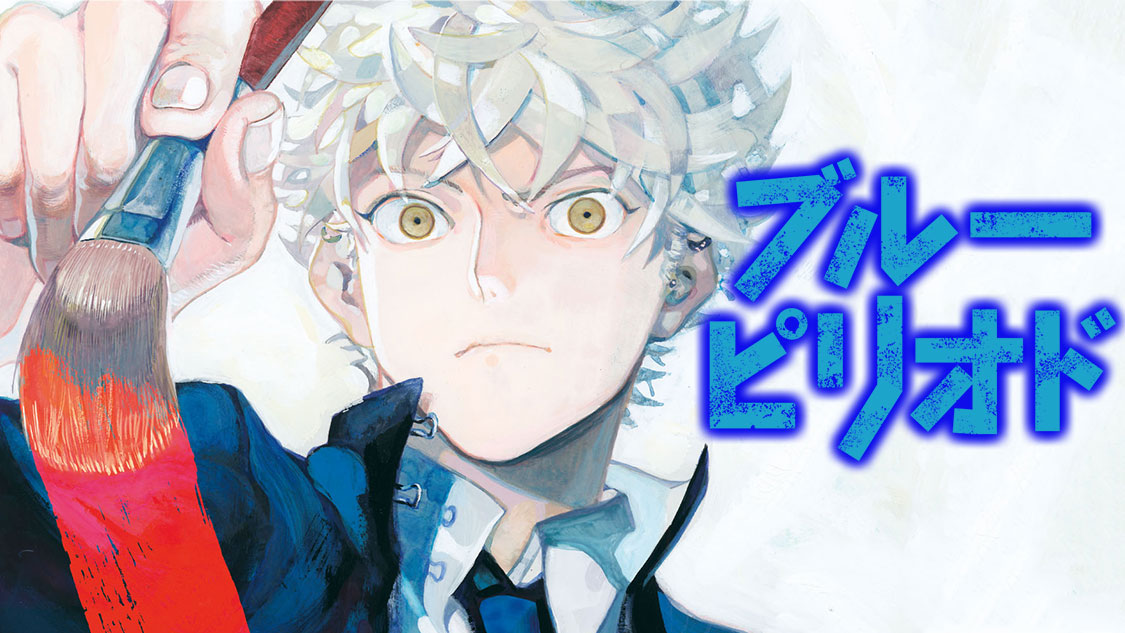 The Manga Taisho 2020 Grand Prize winner “Blue Period” will be adapted into an anime in 2021! The main character, who discovers the appeal of art for the first time in his second year of high school, aims to study at Tokyo University of the Arts, a difficult school to get into, and this is the synopsis of the coming-of-age manga, with spoilers up to the latest episode.

|Spoiler alert for the manga “Blue Period! It’s going to be an anime in 2021.

Blue Period” is a coming-of-age manga that won the Grand Prize at the “Manga Grand Prize 2020” and will be made into an anime in 2021. The story is about the main character, Yaguchi Yatora, who discovers the appeal of painting in his second year of high school. It sets his sights on Tokyo University of the Arts, a prestigious national school with no experience in art.

The sight of high school students and unemployed students struggling and striving to get into art school is sure to get your heart racing! This article explains the coming-of-age manga “Blue Period” appeal with the latest spoilers as of February 2021.

Yaguchi Yatora is a high school sophomore who has a good head on his shoulders and excellent grades. He has many friends, and from the outside, it looks like his days are full of life, but in fact, for him, such a life is like “completing a given quota.

One day, he was assigned the task of “My favorite landscape” during art class and happened to come across a picture of destiny in the art room. He was fascinated by the oil painting, which a third-year art student did for an art school recommendation, and after exchanging words with the artist, he decided to paint “a scene of Shibuya in the early morning.

He is delighted to have his first “conversation” with his friend through the blue-colored painting and becomes fascinated with painting.

–Aim for the Tokyo University of the Arts! How did he convince his mother?

After a conversation with his friend Ryuji Ayukawa and the art club advisor, Yatora joins the art club. He decides to aim for the Tokyo University of the Arts, which is more difficult to get into than the University of Tokyo.

However, his mother, who is more interested in stability, does not seem to like the idea of her son going to the University of the Arts. So Yatora sketches his mother’s back while she is cooking and shows it to her. He succeeded in persuading his mother by telling her that he could understand her better by drawing a picture of her.

With his parents’ approval, he finally set his sights on the Tokyo University of the Arts.

Yatora attends a preparatory school for current students aiming for art college. In the oil painting class he joins, he gets involved with the instructor, Mr. Ohba, a boy genius named Yotasuke Takahashi, and a beautiful girl aiming to study at an art university while she is a ronin.

In the summer course at the prep school, where other students join them, they take on the challenge of the “Prep School Competition. Sedasuke, who has always disliked Yatora’s curt personality, says to him, “You didn’t have to draw anything,” which triggers Yatora to challenge himself with all his might, saying, “I’ll kill everyone with my drawing.

As a result, he did not win the competition, but less than a year after he started painting, he achieved a good result, ranking in the middle of the prep school. The story of his deepening relationships with his friends and teachers is also a must-see.

■[Spoiler #3] The tense entrance exam for the University of the Arts begins! Happenings awaiting Yatora!

Even though the entrance exam to Tokyo University of the Arts was approaching, Yatora had a problem. Having lived his life by conforming to the needs of others, Yatora was “serious” in both good and bad ways and lacked the “enjoyment” necessary for painting.

Later, Yatora’s friend Koigakubo advises him not to hide his true feelings by talking but to arm himself with techniques.

Then, the day of the first exam. With only pencils and charcoal allowed, the examinee was given the task of creating a self-portrait. While he was struggling with expressing the duality of himself, a large girl suddenly bumped into him and broke his mirror.

Looking at the broken mirror, however, Yatora is inspired to draw “multifacetedness. Using his previous knowledge, such as adding light and dark to emphasize depth, he draws a picture that he feels has a good response.

■[Spoiler #4] Two days before the second exam, Yatora and Ryuji head to the ocean.

Yatora successfully passed the first exam, but he heard from another student that Ryuji Ayukawa had withdrawn from the first exam. He became worried and called him, but Ryuji blamed him, saying, “If you saw someone drowning, you would bring life-saving tools, but you would not jump into the sea.

Two days before the second round of exams, Ryuji knew he couldn’t afford to waste his time, but to his surprise, Yatora followed him and jumped on the train. Afterward, they stay at a hotel in Odawara with a view of the sea, and at Ryuji’s suggestion, they decide to paint a self-nude.

Ryuji had been struggling with his feelings about gender and Japanese painting for a long time. He reveals his feelings to Yatora and decides to start walking forward again.

■[Spoiler #5] This is the first time I’ve ever seen a girl with a sore eye.

The second exam was to complete an oil painting over three days. At the venue, he was given the same assignment, “Nude,” which happened to be the one he had painted last night. Yatora was determined to do well, but he ended up dozing off until the lunch break due to the pain in his eyes. However, the pain was relieved by the sleep, and the second half of the first day progressed to the point where he was able to decide on the composition.

Driven into a corner after wasting half of the first day, Yatora decides to start the second day by using a method that uses the base of the canvas to save time. Later, he realized that the picture he was trying to paint was “my world as seen through my eyes” and decided on “nakedness = shameful appearance” as the assignment’s theme.

On the third day, he finally completed the painting, which was so good that even Sedaosuke praised him for his “improved” work. This is how Yatora’s entrance exam for the University of the Arts ends.

■[Spoiler #6] The curtain finally rises on life at the University of the Arts! Unexpected Suffering Strikes Yatora

Yatora, along with Sedaosuke, had successfully passed the entrance exam to the University of the Arts. However, Yatora’s mental health is put on a downward spiral as soon as he enters the university due to his classmates’ disdain for his artistic ability and personality and the harsh attitude of his professor.

He was assigned a self-portrait by May in the first class, but his hard work was criticized as “awful.

In the next assignment, “A View of Tokyo,” he was again criticized. Still, he grew up until Professor Nekoyashiki gave him a warm welcome, saying that he was aware of his abilities.

-Opening of the Arts Festival

As the summer vacation finally begins, the Geidai’s famous “mikoshi making” begins. Yatora is assigned to the team that makes the mikoshi, but the team is short on the workforce, the captain suffers from heatstroke, and a typhoon hits.

However, with the help of the costume-making team, the mikoshi was completed. They paraded through Ueno Park and other areas, creating a festive atmosphere typical of university students. Although their mikoshi did not win the university’s grand prize, it did win the Taito Ward Prize.

Lacking motivation, Yatora ended up only being able to draw one picture during the summer vacation. At the start of the new school year, he is assigned a project for his senior year, for which a famous artist is invited.

Before creating his first huge work of art, Yatora talks to Yedasuke but is furious when he is told that it is a talent to work hard. However, as he talks with his classmates about whether hard work is a talent or not, he realizes that there are many different ways of thinking, and Yatora becomes aware of his narrow-mindedness.

Meanwhile, Yedasuke was frustrated when Yatora asked him if he liked to draw. He is disgusted by the one-sided evaluations of his parents and others, but after a chance encounter with a rabbit, he begins to realize his new potential.

|A new look at the main characters in the manga “Blue Period”!

Yaguchi Yatora is the main character of this story. He is a delinquent high school student who hangs out with his friends until nightfall, drinks, and smokes, but is a good student with excellent grades. He has no hobbies of his own and spends his days in a state of emptiness, but after he realizes the appeal of art, he begins to work harder than anyone else to improve his painting.

Ryuji Ayukawa is a high school boy who is a classmate of Yatora and a member of the art club. His gender is male, but he is a maiden at heart and spends most of his time at school wearing long hair and skirts as a cross-dresser.

He hates being called by his real name, and his nickname is “Yuka-chan.” She and Yatora have a good relationship, although they sometimes quarrel.

Takahashi Yotasuke is a high school boy in the same grade as Yatora, whom he meets at a prep school specializing in art college. In his first appearance, he overwhelms Yatora with his overwhelming drawing ability, and the two become rivals.

The moles under both eyes are characteristic. He is not very good at communication, but he is a genius when it comes to painting.

|You don’t have to be an art expert to enjoy it! The charm and backstory of “Blue Period

-Even if you don’t know much about art, the human story sticks with you deeply.

The story of “Blue Period” is told from the main character’s perspective, who started art from scratch, so there are plenty of explanations interspersed. Even those who are not familiar with the art, such as painting methods, can understand.

One of the highlights of this work is the human relationships depicted through art. The way Yatora, Ryuji, and Sodasuke grow and develop as they clash with each other, each with their own struggles, shows the passion of a sports manga.

-What are the secrets of the works of art that appear in the film?

Many of the artworks that appear in the book have the artist’s name written outside the frame. Also, in the posters around town and museum scenes that Yatora sees, the works of artists who actually exist appear.

Also, just as Yatora’s works are completely different from those of Sedauke, the pictures and words that appear show the individual personalities of each character. It’s a small detail, but please pay attention to each of the characters’ works.

|Read “Blue Period” and prepare for the anime broadcast!

Nazuna
Blue Period” has won numerous awards and is scheduled to be made into an anime in 2021. The main character’s obsession with art is sure to make your heart beat faster! Even people who are not familiar with art can enjoy reading this book, so please give it a try!