SELECTION PROJECT” will start broadcasting in October! The PV of the song “Only one yell” has been released for the first time! 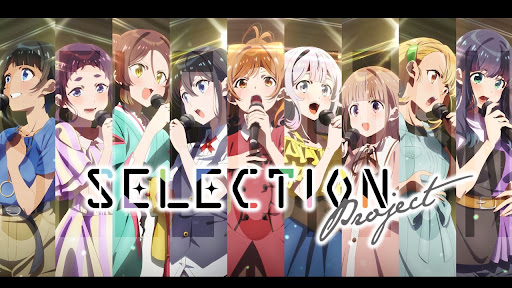 It has been decided that the original anime “SELECTION PROJECT” will start airing in October 2021. At the same time, the second PV has been released.
In the released video, the song “Only one yell” sung by the 9 candidates of each block was shown for the first time. In addition, Seira Kurusu, the representative of North Kanto block, played by Saori Onishi, also appears in the video.

This is an original work based on the concept of “Idol x Audition x Reality Show” by KADOKAWA and Video Studio.

I don’t want to lose to Suzu.”
A candidate to represent the North Kanto block. She was born to an American mother and a Japanese father who were both active as models. She is cheerful and innocent, and enjoys doing whatever she can. She has a strong will that is not influenced by the opinions of others.

Saori Ohnishi Comment
She’s a very cute girl with a great style, but she’s also very straightforward, so straightforward that it makes me feel good to play her! Please look forward to seeing how she will be involved in the story.

INTRODUCTION
The national idol audition reality show “SELECTION PROJECT” is held every summer, and is said to be the biggest gateway to success for girls who want to become idols. This year marks the seventh edition of the show, and the girls who have won the auditions have all made spectacular debuts, gaining popularity both in Japan and abroad.
In the nationwide idol audition reality show, the girls who have won the nine regional qualifying rounds in Hokkaido, Tohoku, North Kanto, South Kanto, Kansai, Chubu, Chugoku, Shikoku, and Kyushu/Okinawa will be followed through documentary footage and LIVE transmissions as they try out for the main audition.
The only thing that will decide who wins will be the “Yell” votes from the users watching the reality show. Who will receive the most votes and win the audition to make their debut as idols? A youthful, passionate audition battle between girls who are both friends and rivals in pursuit of the same dream is about to begin!

The Story
To the place I’ve been longing for for a long time… “SELECTION PROJECT” is the biggest gateway to success for girls aiming to become idols, and is held every summer. It is the stage that every girl who strives to become an idol yearns for. It is also the place where the legendary idol “Amasawa Tou” was born.
Suzune Miyama was one of the girls who yearned to be on such a dream stage. She had been sickly since she was a child, but she listened to the song of Hikari many times in her hospital bed. Her singing voice gave her many smiles and courage. I want to be an idol like Hikari,” she said. …… “I want to be an idol like Hikari,” who can support someone, who can make someone smile, who can bring happiness to someone.
In the last summer of junior high school, Suzune decides to challenge the 7th SELECTION PROJECT in order to make her dream come true, and the girls who challenge SELECTION are all girls with strong feelings, accumulated efforts, and extraordinary charms that no one can beat. Even so, only a few stars are chosen from among the thousands of candidates. Now, in order to make their dreams come true, the girls’ hot and tough battle begins…

Nazuna
It’s all over Twitter and getting so much attention! I can’t wait to see it too, October is just around the corner!