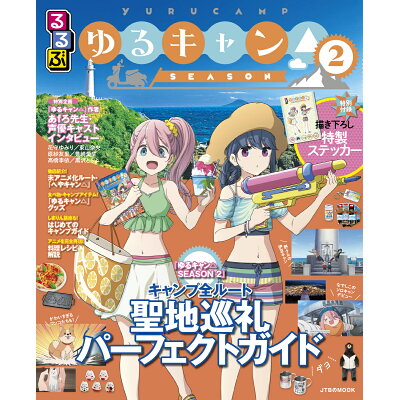 On July 29, 2021, JTB Publishing released the official guidebook “Rurubu Yuru Camping SEASON 2”, a collaboration between the popular anime “Yuru Camping SEASON 2” and the travel information magazine “Rurubu”. The book is so popular that it has been reprinted before its release.

This is the second edition of “Ruruburu Yuru Camp△”, which was published in February 2020, and is a guidebook for pilgrimages to holy sites based on the story of the anime “Yuru Camp△ SEASON 2”, which was broadcast from January to April 2021. The cover features an original illustration drawn exclusively for “Rurubu”. It features Nadeshiko Kakamigahara and Rin Shima in swimsuits, just in time for the summer release.

Also included in the special supplement are special stickers with original illustrations of Nadeshiko and Rin, as well as smaller stickers of Chiaki Ogaki, Aoi Inuyama, and Chikuwa (*stickers are not waterproof), and a Twitter gift campaign to celebrate the release. For 8 days, the official Twitter account (https://twitter.com/jtbp_books) of JTB Publishing’s publication information will be running a “Celebrating the release of ‘Yurubu Yuru Camp△ SEASON 2’! Twitter Follow & Retweet Campaign” is being held on the official Twitter account () of JTB Publishing, which distributes publication information. Those who meet the entry requirements will be entered into a drawing to win an original SNS-style clear card set (3 sets, 5 people) or a souvenir and collaboration food set (3 sets, 3 people) from the anime.

The tea “Hiko-zo” from the Japanese tea store “Nihon-cha Kimikura”, which appears as “Takakura” in the second episode of “Yuru-Can△ SEASON2”, is a new tea (80g) from 2021.

The “Suppon Sabure” of Omiya Yondaime, which appeared as a “Suppon Biscuit” in the fourth episode of “Yuru Camp△ SEASON2”.

Nazuna
Nadeshiko backpack is very cute. It’s not only cute but also functional and useful. The price is a little high, but it is probably more suitable for camping than other backpacks.