EVANGELION: 3.0+1.0 THRICE UPON A TIME” now available exclusively on Amazon Prime Video! Have you said “goodbye” to “Eva” yet? 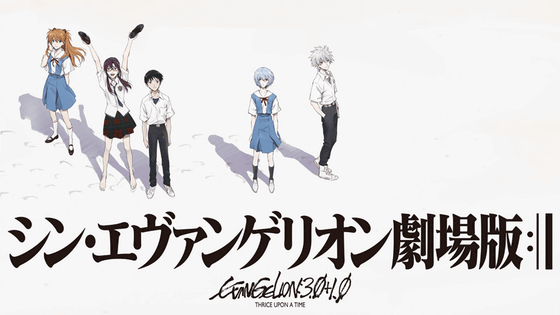 EVANGELION: 3.0+1.0 THRICE UPON A TIME”, the concluding film of the long-running “Evangelion” series since the TV version was released in 1995, has finally been released on video distribution services.

The film has been released exclusively on Amazon Prime Video (as of August 13, 2021), and is now available to Amazon Prime members at no extra charge.

EVANGELION:3.0+1.0 THRICE UPON A TIME” is a continuation of “EVANGELION:1.0 YOU ARE (NOT) ALONE.” which was released in theaters in 2007. It continues with a completely different ending from the original TV anime “Neon Genesis Evangelion”.

EVANGELION: 1.0 YOU ARE (NOT) ALONE.” is a story that reconstructs “Neon Genesis Evangelion” with modern animation technology, and while “Ou” recreates the original story, it also features an intriguing ending that leads to the sequel. In addition, “Q” became the talk of the town for its surprising twist that caught the fans off guard.

The fans who have been waiting for this film have been very enthusiastic, and it has become a hot topic of conversation as it has set records such as the highest box-office revenue of 10 billion yen for a series of films in history and the number of spectators exceeding 6.55 million.

This time, “Shin Evangelion the Movie” will be distributed with a version called “EVANGELION:3.0+1.01 THRICE UPON A TIME” with further adjustments. It is noteworthy that the world’s best animation has evolved further. If you’ve seen it in the theater, you may want to look for the differences between this version and the theatrical version.

Incidentally, the documentary program “Sayonara All Evangelions – Hideaki Anno’s 1214 Days”, which closely followed Hideaki Anno, the general director of “Shin Evangelion the Movie”, for four years, is now available. This video is also a must-see, as it describes Anno’s persistence and anguish in making the final work.

Goodbye, All Evangelions. Shinji’s Last Battle in the Depths of Despair Synopsis.

This article contains some spoilers for “Shin-Evangelion the Movie”.

In the final scene of “Rebuild of Evangelion: Q”, Shinji and Asuka, having averted the Force Impact, crash-land on the ground with Ayanami Rei (tentative name), and wait for rescue.

“As Asuka and the others travel to a place where humans can be rescued, they are contacted by Vile, and a certain person appears. It was Kensuke Aida, a former classmate who had grown up over the past 14 years.

Kenji and his friends get into the car that Kensuke has been driving and arrive at the third village where the people who survived the “Near Third Impact” in “Evangelion: 3.0 You Can (Not) Redo” live. The village is also home to Toji Suzuhara, who was a mate of Kensuke’s, and has gained the trust of the residents as a doctor.

In Q, Shinji has lost the will to live after losing Kaworu Nagisa in front of him. He is treated to a meal at Touji’s house, but is unable to eat, and Kensuke, unable to bear to see this, invites Shinji to his house.

Asuka was also staying at Kensuke’s house. Asuka has a “DSS Choker” around her neck, and Shinji vomits when he sees it.

Over time, Shinji gradually regains his strength. However, the peaceful days do not last long. ……