【Classroom of the Elite】What is Kiyotaka Ayanokoji’s past and who is he? What will happen to him and Karuizawa? 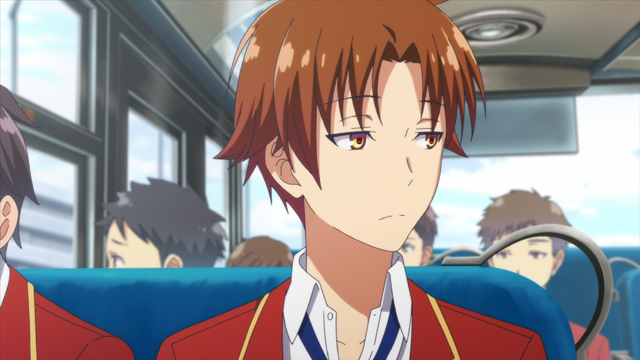 A student of 2nd year D class. The protagonist of this story. He is usually inconspicuous and overshadowed in class.
From the moment he was born, he was raised in a facility called the White Room, where he received a thorough education. He has extremely high physical ability and intelligence, but also has a cold-hearted side. However, he is not taking school seriously at the moment and has not received a very high evaluation.

Ayanokoji’s father is the head of the White Room and has a big attitude and considerable power over Chancellor Sakayanagi, the head of the school. His father is crazy about Kiyotaka and has requested that he be expelled from the school in order to bring him back to the White Room, but the school refuses, saying that they can’t expel him without his consent. The school refuses to expel him without his consent.
There is currently very little information about his mother.

|In fact, Ayanokoji’s personality was different when he first entered the school.

I had been in the white room all my life until I was 15 years old, so I didn’t have anyone I could call a friend. So when I first entered the school, I was not very good at socializing and I lost sight of my character.
By the way, in the anime, I always had the image of being calm and apathetic from the beginning, but in the original, my impression at the beginning was a little different. In the original, the calmness was the same, but there were descriptions of her heart, and it was often written that she strongly wanted to have friends. So he often joked with Horikita.

|How did Ayakoji end up in class D?

The test and interview are just for decoration, and students with recommendations are always accepted. The criteria for recommendations have not yet been announced.
Ayanokoji was originally not recommended, but Chancellor Sakayanagi, who had known about the White Room for a long time, recognized Ayanokoji and admitted him to the school. Chancellor Sakayanagi then decided to assign him to D class. The reason for this was that the homeroom teacher, Chabashira-sensei, was a teacher who ostensibly did not take a strong interest in the class conflict.
But in fact, Chabashira-sensei has a desire to move up to Class A more than anyone else, and when Chancellor Sakayanagi told him about this, he threatened Ayanokouji with lies to get him to move up, but he has now been seen through.

Ayanokoji is a perfect person with perfect academic and physical abilities.
However, he doesn’t show his abilities to others and works behind the scenes to keep them in the dark. As a result, not many people know about his true abilities.
As for his academic abilities, he can easily keep score on tests and get perfect scores, and in the test with Sakayanagi in volume 11, he can quickly solve flash calculations that no one else can.
In terms of physical ability, he is able to compete with the Horikita School student council president in a relay race and beat up Ryuzono and his friends by himself. He is the strongest in both sports and fighting.
If it weren’t for Ayakoji, he would have lost the survival test in the first year, and in the chess match with Sakayanagi, he lost, but Ayakoji would have won.
The reason why Ayakoji has been hiding his abilities is because he doesn’t want to stand out and he doesn’t want to expose what happened in the White Room in the past.

|The relationship between Ayanokoji and Karuizawa

Although she didn’t appear that much in the anime, she is actually one of the main heroine characters of Yojitsu. She is now ranked number one in the “female character category” of Yojitsu.
The reason why she became so popular is because of her relationship with Ayakoji!
And the process of overcoming her past trauma of being bullied and coming to the present resonated with the readers!
What will happen to Karuizawa in the future?

Nazuna
In this article, I summarized Kiyotaka Ayanokoji, the main character of “Welcome to the Classroom of Competence Supremacy”. The characters in “Yojitsu” are all cool and cute. I’m looking forward to reading the story every time, wondering how Ayakoji will work behind the scenes without standing out in the open.

konichiwa nazuna.
I really like the infromation you gave. Actually i m trying to build my personality like kiyotaka. So it really help me a lot.