“The story of a senior who is annoying a junior” will start airing in October! Tomori Kusunoki & Shunsuke Takeuchi are the main cast! 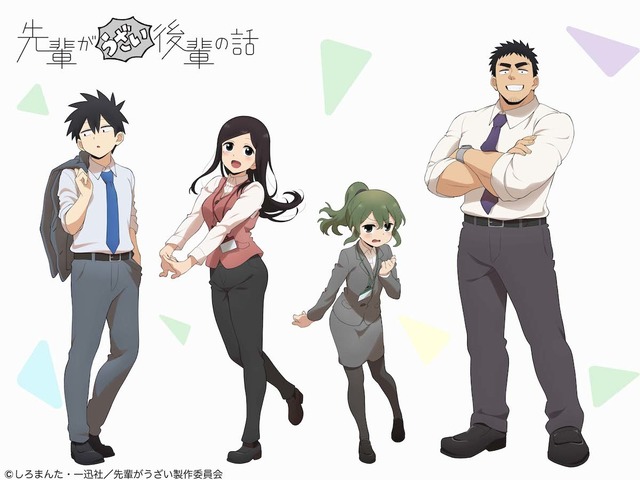 The TV anime adaptation of the working adult romantic comedy “The story of a senior who is annoying a junior” has been announced for broadcast in October 2021. The main character, Futaba Igarashi, will be played by Tomori Kusunoki, and her senior, Harumi Takeda, will be played by Shunsuke Takeuchi. News 2021.4.27 Tue 11:45 Hot article

The TV anime adaptation of the working adult romantic comedy The story of a senior who is annoying a junior” has been announced for broadcast in October 2021. At the same time, the main character Futaba Igarashi will be played by Tomori Kusunoki, and Shunsuke Takeuchi will play her senior Harumi Takeda.

The original story of “The Story of a Senior Annoying Juniors” is a comic of the same title serialized by Shiro Manta in Ichijinsha’s “Comic POOL” and has sold over one million copies in total.
It is an everyday romantic comedy about Futaba Igarashi, who is in her second year at the company and wants to become a full-fledged employee as soon as possible, and Harumi Takeda, a senior who is a bit crass but takes good care of her.

The two main cast members were announced this time.
The character voices of Kusunoki and Takeuchi have already been released as a commercial for the seventh volume of the original comic, and people have been saying that they are just as they imagined. Comments have also arrived from the two cast members, the original author and the staff.

The story of a senior who is annoying” will start airing in October.

＜The full text of the comments is below.

My name is Tomori Kusunoki, and I will be playing the role of Futaba Igarashi.
Actually, I am a reader who has been healed by reading the manga for a long time, so I feel happy to be the voice of Futaba.
In the TV anime as well, I will play the role so that the daily life of seniors and juniors will be a healing experience for everyone, so please look forward to the broadcast!

I’m the voice of the senior staff. I’m Takeuchi.
Every time we record, we are in a relaxed mood, full of laughter and fun.
Shiromani-sensei also joins the recording every time, and we talk to each other as we work.
We hope you will enjoy our work as much as we do.

It’s been so much fun to visit the recording every week!
I just had so much respect for the profession of voice acting.
I can’t thank the director and the production staff enough!
I’m sorry for always bringing home candy from the recording site.

Futaba, who is full of energy and straightforward, and Takeda, a “man of the Showa era,” are bumpy but somehow fit together.
It’s a fun story with such heartwarming interactions.
It’s a story of fun, happiness, and a bit of sadness and pain.
I hope to portray those days that you may look back on someday.

I like the situation of seniors and juniors, don’t you?
Igarashi-chan, who is small like a child but hardworking, and Takeda-senpai, who is big and dependable but a bit grumpy, we aimed to create a fun and funny story centered on the heart-stopping drama between them.
Please take a look!

I hope that I can enjoy playing the role of the bright, beautiful, mischievous, and cute Sakurai-san to the fullest.
We are all concentrating on our work at the recording studio, but the atmosphere is friendly and relaxed, just like at the Itomaki Trading Company.
We hope that you will enjoy this film for today’s relaxation and tomorrow’s vitality.

My name is Leo Tschida, and I’ll be playing the role of Souta Kazama.
After the role was decided, I read the original story at home to practice, but I was grinning so much that I wondered if I could do it without laughing during the recording.
I was worried that I wouldn’t do it without laughing during the recording, but I did my best. So please enjoy the broadcast with a big grin on your face.

My name is Koga Aoi, and I’ll be playing the role of Tsukishiromona.
Congratulations on the anime!
I’m really looking forward to seeing Futaba and the others in action, and I’m delighted and honored to be working with Mona on this project.
In the original story as well, Mona-san always goes her own way whenever she appears.
I’ll do my best to keep up with her, have fun with her, and make sure that many people will love her.
I look forward to working with you.

Nazuna
Why can’t we just tell each other how we feel already! This work is very popular on Twitter and always ranks high in the e-book rankings. I’m really looking forward to the anime.