Teasers and staff for the fall anime “Tesla Note”. 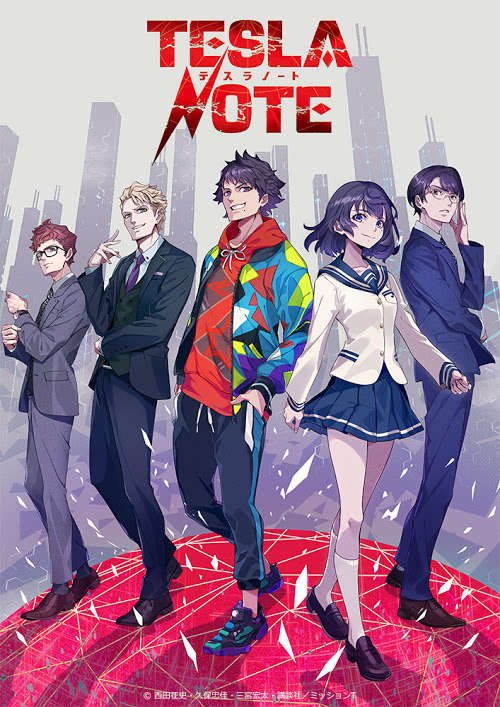 The manga “Tesla Note” (original story by Masashi Nishida, Tadayoshi Kubo, Kota Sannomiya), which is serialized in Kodansha’s Weekly Shonen Magazine, has been adapted into a TV anime and will start airing in 2021.
It will be broadcasted in October 2021. At the same time, a teaser visual, a teaser PV, and CG character setting pictures have been released.

This is a TV animation based on a full-fledged spy action manga by Nishida Seishi of “TIGER & BUNNY” fame. It portrays the battle of spies for the destruction of the world over the crystal “Tesla’s Piece” left behind by inventor Nikola Tesla. Directed by Michio Fukuda, series composition and script by Masashi Nishida, character designs by POKImari, and animation production by Gambit.

Yoshimi Obara plays Peony Negoro, a high school girl who is a descendant of the Negoro ninja and has top-notch skills and knowledge. Tatsuo Suzuki plays Kuruma, the self-proclaimed No. 1 spy who turns against Peony when they are suddenly paired up, with Tomoaki Maeno as Ryunosuke Takamatsu, Junichi Suwabe as Mickey Miller, and Hiroshi Kamiya as Oliver Thornton.

Nikola Tesla. The genius inventor, whose talent made Thomas Edison jealous, kept a record of all his inventions in a crystal notebook. Peony Negoro, a descendant of ninjas and raised to be the best intelligence officer in the world, is called to retrieve the crystal “Tesla’s Piece” after a mysterious incident in Norway. There, she finds herself partnered with Kuruma, the self-proclaimed No. 1 secret agent, who is waiting for her.

In the teaser PV, the main characters appear one after another, including Peony Negoro, who smiles fearlessly and says, “I’ll protect myself,” and Kuruma, who provokes, “You must be a very talented veteran if you let me team up with you,” as well as Ryunosuke Takamatsu, Mickey Miller, and Oliver Thornton.

|About the theme song

The opening theme song will be “PUPPET’S” by TOKYO MONSTERS. The members of TOKYO MONSTERS commented on the song, “We wrote this song to convey the tension and the struggle of the spies with the fate of the world at stake.

On the other hand, the ending theme song “Proseful LIFE” by Ninomiya Yui focuses on the main character, Botan. About the creation of this song, she said, “Even though she has the heavy responsibility of saving the world as a secret agent, she is only 17 years old, and I wrote the lyrics while thinking that she must have a lot of feelings.

I am very happy to be in charge of the OP theme.
I created this song to convey the tension and the struggle of the spies for the fate of the world.

My name is Ninomiya Yui, and I will be in charge of the ED theme for the TV anime “Tesla Note”.
I read the original story before I started working on the ED theme, and I immediately became a fan of the work, especially because the characters are so unique and attractive.
My song “Proseful LIFE” focuses on the main character, Botan Negoro, among many other attractive characters. Even though she has the heavy responsibility of saving the world as a secret agent, she is only 17 years old, and I wrote the lyrics thinking that she must have a lot of feelings. The tune of the song is bright and cheerful, but also jazzy and cool, and I think it’s quite a voluminous song, so I hope you enjoy listening to it.