The new PV for “YUKI YUNA IS A HERO season3” has arrived! Synopsis of the previous story also revealed! 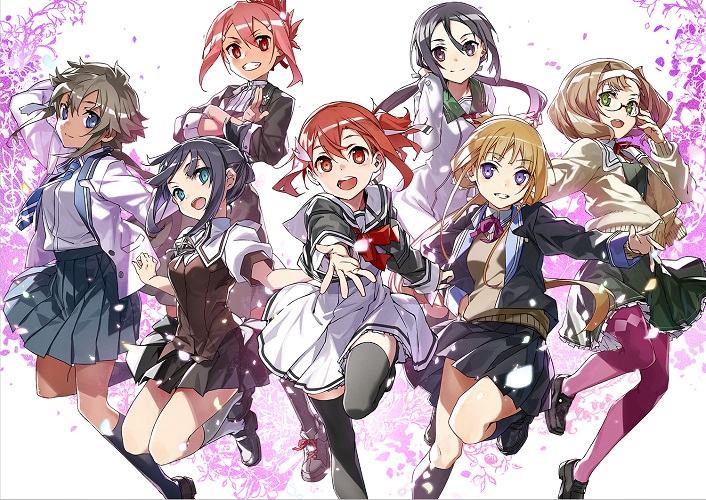 A new PV has been released from V anime ‘YUKI YUNA IS A HERO season3’. It describes daily life scene and battle scene of 6 members of Yuusha Club respectively, which will raise your expectation for the main story. This work will start airing on MBS/TBS from October 1 (Fri.), 2021.

In addition, the CD release information for the opening theme “Ashitanohanachi” and the ending theme “Jibisen no Mukou e” has also been released. They will be released on October 27 (Wed.). Please look forward to what the music will be like.

■Broadcast Date
To be broadcast on MBS/TBS from October 1, 2021.

|Spoiler the second season of YUKI YUNA IS A HERO

■What is YUKI YUNA IS A HERO?

YUKI YUNA IS A HERO” is a story of girls transforming and fighting in Shikoku in the near future. The girls, who were chosen by the god of the earth, Shinju-sama, become heroes and fight against the god of heaven and his misshapen enemy, Vertex. The cute but brave girls and the rich setting have made it popular.

YUKI YUNA IS A HERO” is the second installment in the “Yuusha Desu Aru series” planned and written by game creator Takahiro. The first installment of the Yuusha-de aru series was the illustrated novel “Washio Sumi wa Yuusha de aru” (Washio Sumi is a hero). The first half of the second season, “YUKI YUNA IS A HERO season2” is an animated version of the first illustration novel, “Sumi Washio is a Hero. It was shown in theaters across Japan prior to the TV broadcast.

|Spoiler alert for the entire second season of YUKI YUNA IS A HERO!

The three girls are Sumi Washio, Sonoko Nogi, and Gin Minowa. The three girls fight their first battle as heroes against the deformed enemy Vertex and win.

The second episode, “Friends,” is about three girls who have been chosen by Kamiju-sama to deepen their friendship. Due to the sudden formation of the team, these three girls are not able to work as a team. So, to strengthen their teamwork, they hold a training camp. The teacher, Aki, decides that Sonoko Nogi will be the team leader.

Sumi Washio was shocked by this, as she had always believed that she should be the leader of the team. However, through the camp, she learns about her friends and at the same time, she truly learns the importance of cooperating with others. After defeating Vertex through indoctrinated teamwork, Sumi understood the bond of the team and cried.

Episode 3 is, as the title suggests, an everyday episode. Sumi and the others spend their days fighting against the heavenly enemy Vertex. Sumi and the others are told to take a good rest from time to time. The three of them change their clothes and have fun, and work hard on the orientation for new students. It’s all very smiling. However, the next episode’s preview quickly reveals that this happiness will not last. The preview for the fourth episode, “Tamashii,” shows that a grim future awaits them.

In the first half of episode 4, we see Sumi Washio and the other three enjoying a field trip. Sonoko can’t cook, but Gin promises to teach her how to cook, saying, “I can make yakisoba in no time. On the way back from the excursion, the three of them have to fight Vertex. Up until now, the Vertexes had come alone, but this time, they attacked in threes. Sumi and Sonoko are badly damaged and lose consciousness.

Gin, for the sake of his role and his stuck friends, faces the three Vertexes alone. When Sumi and Sonoko woke up, the Vertexes were no longer there. Silver is standing at a distance. Sumi and Sonoko run over to her and say “Thank you” and find out that Silver is dead on the ground. They were so sad that they broke down and cried on the spot.

In the beginning of episode 5, homeroom teacher Aki-sensei is explaining the death of Gin Minowa to her students. The scene changes to Gin’s farewell ceremony. During the ceremony, Gin’s brother cries, “Give me back my sister. Sumi and Sonoko hold back their tears and offer flowers to Gin’s body.

In the middle of the farewell ceremony, Vertex attacks. Sumi and Sonoko fight and win, thinking of Gin. On the way home in the car, Sonoko cries out for Gin. Later, Sumi invites Sonoko to a summer festival, and the two confirm their bond by saying, “The three of us will always be friends,” in front of the three prizes they won in the shooting game.

This is the sixth and final episode of “YUKI YUNA IS A HERO season2”. A new device is given to Sumi and Sonoko from Taisha, the servant of Lord Kamiki. This device will allow them to use the heroic “Full Blossom” system. The “Full Blossom” system has been around since the first season, and is the trump card of the heroes. It enables the use of powerful techniques, but after the full bloom, the brave girl is deprived of her body functions and memories.

Before fighting the Vertexes, Sonoko gives Sumi her ribbon. Sumi and Sonoko fight the three Vertexes with their “full bloom”. Sumi and Sonoko fight the three Vertexes in full bloom. However, Sonoko loses one eye, one arm, and her heart, and Sumi loses the function of her legs and her memory. Sonoko realizes that even if her heart stops beating, she will not be able to die, so she heads out alone to stop the large number of Vertexes.

Sumi wakes up in a hospital. She no longer remembers herself as Sumi Washio, and changes her name back to Mimori Togo. Here is a spoilerific explanation of this name change. Sumi Washio was originally a civilian named Mimori Togo. The role of a hero was originally reserved for the daughters of high-ranking members of the Daishonin, so she was adopted and raised by the high-ranking Washio family.

However, since there were not enough people in the Grand Pardon who were suitable to become heroes, it was decided to choose heroes from outside the Grand Pardon. Sumi Washio, who had lost her memory, took this opportunity to return to Mimori Togo and live next to Yuna Yuki, who had the highest aptitude value as a hero. Mimori has forgotten everything, but her hair is still adorned with the ribbon given to her by Sonoko Nogi.

Sonoko Nogi, in her ragged body, tells her about the heroic system and the devastation outside Shikoku. For a time, Mimori wants to destroy both the god tree and the world, but her friends persuade her not to do so. In the end, Yuna vanquishes the God of Heaven and the girls return to their daily lives.

|Spoilers for the final episode of YUKI YUNA IS A HERO 2nd season!

■In the last episode, there are two battles!

In the last episode of the second season of Yuki Yuna is a Hero, the God of Heaven is angry with Yuna’s divine marriage and attacks humanity. The members of the hero club transform and face the Vertex. And they also take on another battle. This is a battle to stop the divine marriage of Yuna and Shinju-sama. Fighting the Vertex are Narin Miyoshi, Sonoko Nogi, and Itsuki Inubozaki. Togo Mimori and Inubozaki Fuu will go to Yuna’s place.

■Natsuin in the same situation as Ginn

In the last episode of “Yuki Yuna Is A Hero Season 2,” Natsuin finds himself in a dangerous situation, just like Gin Minowa in episode 4 of “The Chapter of Sumi Wasio. She fights the enemy with two swords for the sake of her friends and gets hurt just like Gin.

■“Yuna speaks her mind, “Please save me.

Mimori arrives at Yuna’s captivity. Yuna refuses to stop her divine marriage, but when Mimori tearfully cries out, “If you’re my friend, tell me the truth,” Yuna confesses her true feelings, “Save me. Since the first season of “Yuki Yuna is a Hero”, Yuna has been too kind to talk about her problems to the people around her, and in the last episode of the second season, she finally said “Save me”.

■The souls of the heroes of the past gather

Tomona and the others’ feelings are not understood by Shinju-sama, and the divine wedding ceremony does not stop. Then, suddenly, the shadow of a girl comes. It is the spirit of Miyoshi Gin, who once fought with Mimori. The shadows multiplied one by one. The souls of the heroes of the past are rushing to the scene. The last blue raven seems to be that of Wakaba Nogi, the first hero from 300 years ago in the world of Yuki Yuna is a Hero.

■Yuna in full bloom mode. What is the identity of the cow demon?

Yuna’s spirit, Ushioni, appears beside her. The Cow Demon causes Yuna to achieve her full bloom. Yuna fights off the God of Heaven with a heroic punch that brings together everyone’s feelings.

■The battle is over, and a new future lies ahead.

Yuna and the others lose their power as heroes. The heavenly talisman in Yuna’s chest also disappears. Although they lost God’s blessing, they were able to go to a future where children would not be sacrificed. The final episode of “Yuki Yuna Is A Hero Season 2” ends with the heroes regaining their daily lives and smiles.