TV anime “Muv-Luv Alternative” advance screening with all 7 cast members will be held on 9/25! Past series will also be distributed in one go! 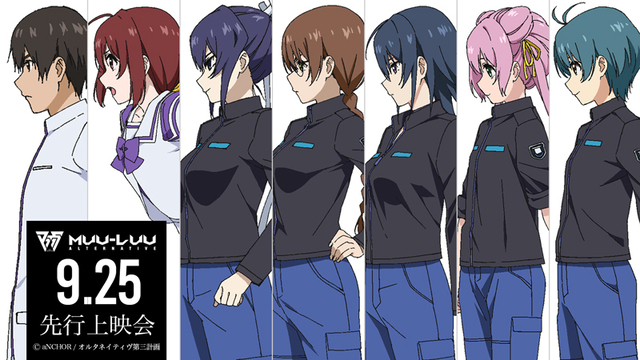 For the TV anime “Muv-Luv Alternative,” which will start airing in October 2021, it has been announced that an advance screening will be held and the past anime series will be distributed all at once.

Muv-Luv” is an adventure game planned and produced by the game brand “age”, released in 2003.
Together with “Muv-Luv Alternative” released in 2006, it forms a single epic story, and is a project that has been developed into many shared world titles and media mixes. The long-awaited TV anime “Muv-Luv Alternative” will be broadcasted on Fuji TV’s “+Ultra” and other channels every Wednesday from October 6 (Wed) at 24:55, and will also be distributed exclusively on FOD.

The story takes place in one of the countless parallel universes that exist in this time and space, where humans have been waging a decades-long battle against BETA, an extraterrestrial species that is hostile to humanity, with humanoid weapons called tactical walking machines. The story is full of highlights, including action scenes with tactical planes.

This time, it was decided that an advance screening with stage greetings by all seven main cast members will be held on September 25th (Saturday).

The seven main cast members, Koichi Kamiki, Tomori Kusunoki, Karin Nahami, Mirai Ito, Iori Saeki, Takako Tanaka, and Lynn, will all perform.
The first and second episodes will be screened twice on the same day at Shinjuku Wald 9.
Not only will you be able to watch the full-length footage before it airs, but it will also be the first time that all of the voice actors will be together in public for the special event. Tickets for the event will be available from 17:00 today, September 3rd (Fri). There will also be an invitation campaign on the “Muv-Luv-Verse” service, so please take this opportunity to participate.

We hope you enjoy this opportunity to take a fresh look back at the worldview and events of the series before the anime airs in October.

To celebrate the start of the TV broadcast, an advance screening with stage greetings by the seven main cast members will be held on September 25 (Sat).

Entry period: Friday, September 3, 17:00 – Monday, September 6, 23:59
Method of application: Web booking (URL https://l-tike.com/muv-luv-pr)
Free Lawson Ticket membership registration is required in advance.
You need to register as a free member of Lawson Ticket in advance. One ticket per person is limited for each performance.

＜General sale (first-come, first-served)
Sales period: September 19 (Sun), 12:00-
How to make a reservation: WEB reservation (URL https://l-tike.com/muv-luv-pr)
Only one ticket per person is allowed per purchase.

＜Synopsis.＞
The human race is on the verge of extinction due to the war against the alien species “BETA”. Then, in 2001. A joint Japan-U.S. plan to upgrade tactical aircraft is drawn up, and Takamura Yui heads to Alaska as the planner. On the other hand, Yuuya Bridges of the U.S. Army is also on his way to Alaska.

＜Synopsis.＞
Eighteen years back from 2001, the year of Total Eclipse, 1983, East Germany is in the midst of a fierce battle against the BETA hordes coming from the east. Theodor, an East German guard who has lost faith in others due to the desperate war situation and the pressure of state power, accidentally rescues a girl who is a West German guard. The girl, Katia, defected to East Germany with a genuine desire to join Theodore’s 666th Tactical Aircraft Squadron, the Schwarzesmarken. With his encounter with Katia and the intertwining thoughts of squadron commander Iris Dina, Theodore’s fate begins to take a major turn.

＜distribution＞
The latest episode will be broadcasted every Wednesday at 24:55 starting October 6 (Wed.).
Please note that the delivery time may be subject to change.