[World Trigger 3rd] 3rd EP Spoiler! The clash with Ninomiya Squad, and the contents of B Rank Battle ROUND 8! 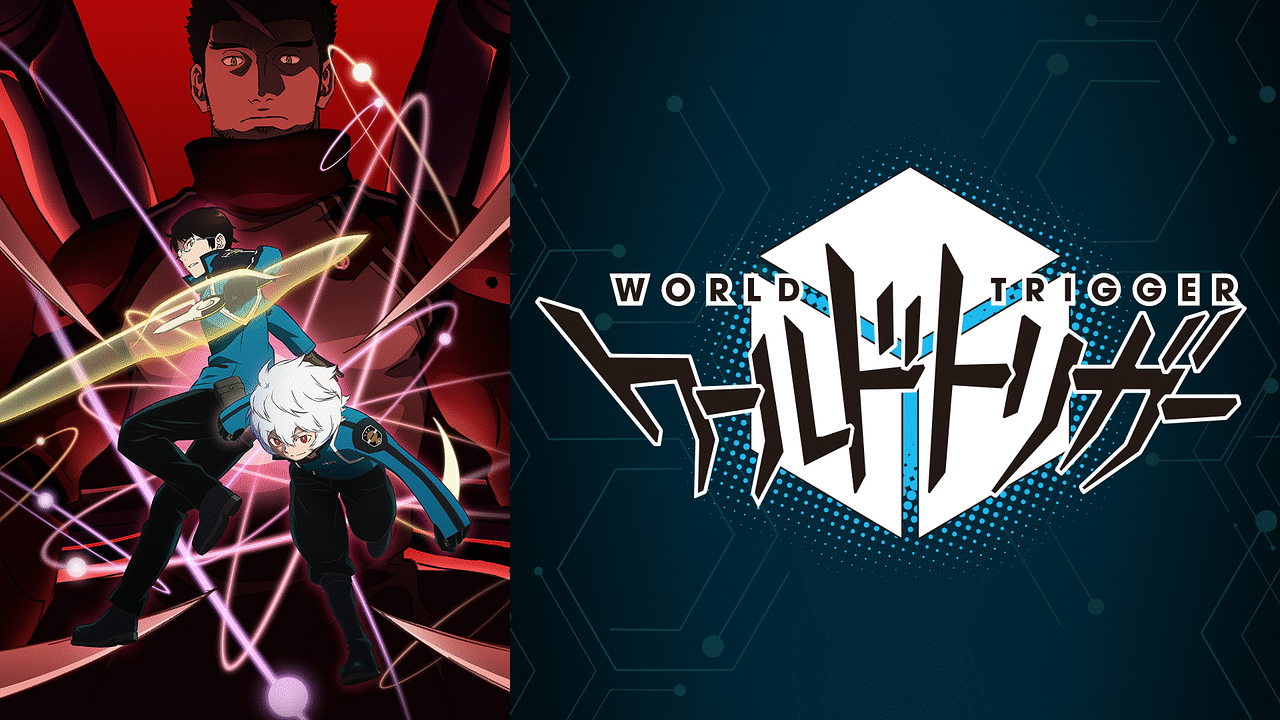 The third season of the “World Trigger” anime will start airing in October. In the second season, there were events such as Shu’s new tactics and Hughes’ joining, and in the third season, it will be the contents of ROUND 7 and ROUND 8 of the B-rank battle. This time, I’d like to spoil the contents of ROUND8, the important final battle where the second expedition of Tamakamain is at stake!

|Synopsis up to the start of ROUND 8

ROUND 7 was a ranked battle between Tamakomean No. 2, Kageura Squad, Raima Squad, and Higashi Squad, and the field chosen was Urban Area D, which tends to be an indoor battle. The chosen field was the urban area D, which is prone to indoor battles. The new force, Hughes, was active right from the start of this rank battle, and Chika’s bombing from the open air also worked to their advantage, and the Tamakomean 2nd won with a total of 6 points (4 for survival and 2 for destruction), making great progress towards joining the expeditionary force. At the same time, Hughes is suspected of being a near-worlder, but before Osamu realizes it, Netsuke, the head of the media countermeasure office, has already taken countermeasures. Thanks to Netsuke’s fine play, the concern was dispelled, and the Tamakomean No.2 will take measures for ROUND 8.

|Yakiniku with the Ninomiya Unit

The combination for ROUND 8 is the 3rd place Tamakomean 2nd, the 1st place Ninomiya squad, the 4th place Ikoma squad, and the 7th place Yumiba squad. In order to reach the expeditionary team’s goal of 2nd place, they want to defeat the Ninomiya squad at all costs and earn points. Osamu and Chika go out to eat yakiniku on Konan’s treat, where they bump into Ninomiya’s team. The topic of conversation was about Mirai Hatohara, a former member of the Ninomiya Corps who Chika’s brother, Rinko Ametori, seems to have come into contact with. Hatohara had wanted to join the expeditionary force after his younger brother was kidnapped by near-worlders, but he was not selected for the force due to his aptitude. He was told that his brother had been kidnapped by near-worlders and he had wanted to join the expeditionary force, but he had not been selected due to his unfitness.

|Tamakoma II struggles to cope with ROUND 8

Tamakomean No. 2 considers countermeasures against their strongest opponent, the Ninomiya Corps. There was a hint that Hughes’ Viper was somehow predicted by the Ninomiya squad, and whether or not Chika could shoot people was a major factor in the victory or defeat. Yuuma and Osamu went to see Satomi of the Kusakabe team who was familiar with Ninomiya and Yumiba through Midorikawa’s introduction. There, they are told of the overwhelming strengths of Yumiba and Ninomiya. Yumiba is Satomi’s mentor, and his style is said to be based on Yumiba and Ninomiya. Satomi herself doesn’t realize it, but she is currently the best gunner in the world.

■Takuma on a suicide mission

Youma fearlessly goes to visit the archers in person. There, he meets Obishima, a member of the archery team who admires Youma. Obishima was boyish but a girl, and Youma mistook her for a man. There, he and Obishima engage in a mock battle, and for once, he shows seriousness and overwhelms Obishima. Yumiba responded to his seriousness and fought one more mock battle with Youma, but the result was a victory for Yumiba, who showed overwhelming rapid fire. The Tamakomean No. 2 carefully formulates a strategy to counter the powerful Ninomiya, Yumiba, and Ikoma squads.

|The final round of B-Rank Round 8 begins!

Round 8 of the B rank battle finally started, and the Tamakomean No.2 tried to prioritize the rendezvous, but they started from the initial position where Hughes was surrounded. Chika and Yuuma were able to meet up with each other, but it was Ninomiya who attacked them with guided explosive bombs. Ninomiya was trying to see if Chika could shoot there. Chika ejected a hound from behind Yuma, who deflated and put up a shield. Seeing the Tamakomain 2nd and Ninomiya squads fighting, the Yumiba and Ikoma squads also start to move.

Due to the poor transfer position, Hughes is surrounded by the Yumiba and Ikoma squads and is unable to escape. However, Hughes still persists. Shu tries to get Chika to help Hughes escape, but she can’t move because the sniper Sotooka is watching her. So Hughes tries to bomb him with Meteora. However, at the moment of the bombing, Tonooka snipes at the Meteora, and the Meteora goes off. With the fixed shield, Yuuma and Chika are unharmed, but Hughes is in a desperate situation.

|Hughes’ hidden gem, the Viper, is about to explode!

After the bombing failed, Hughes was surrounded by three units, and the damage accumulated. Although he had avoided fatal wounds so far, the siege was so thick that the repeated attacks brought him close to the limit of his activity. After being struck in the leg by Ikoma’s arc moon, Hughes has no choice. So Hughes defeated Ikoma with a hidden bullet. However, Minamisawa takes advantage of the opportunity and defeats him.

■What’s the next move for the second Tamakoma 2 team, now down to three players?

It’s a bad trend for Tamakomain, with the bad luck of the transfer position, the blocking of Meteora, and the destruction of Hughes, but there is more movement on the battlefield, and Mizukami, surrounded by Yumiba of Yumiba Squad and Inukai of Ninomiya Squad, is also destroyed, which is a point for Yumiba Squad. Minamisawa of the Ikoma Corps is also nearing the limit of its activity, and Obishima of the Yumiba Corps goes for it. Sotooka, who has been marking Chika, snipes her as she gets into a firing position for the Hound, but it is a strategy to expose Sotooka’s position, and the sniper is well protected by a shield. The Hound is aimed at Tonooka, and Tonooka jumps down from the sniper point to escape, but Oki of the Ikoma Unit, who had been sneaking around, defeats Tonooka.

|And the battle situation has changed! Ikoma’s troops have been wiped out!

The Ikoma unit is at a significant disadvantage with two men down. The remaining sniper, Oki, attempts to join up with the wounded Minamisawa, but he is targeted by Ninomiya’s synthetic bullets, and Tsuji is waiting for him at the destination. Oki was defeated by a flash of the arc moon, and this gave Ninomiya’s team a point. Oki was defeated by a flash of lightning from Arcadia, which gave Ninomiya’s team a point. On the other hand, Minamisawa and Obishima, who were running away, and Yuuma joined the battle, resulting in a three-way battle. Since Minamisawa was the highest ranked player and there was a high possibility that Osamu was hiding somewhere, he tried to fight with Obishima, but Obishima prioritized his points and defeated Minamisawa. This wipes out the Ikoma unit.

Yumiba doggedly pursued Inukai, but his gun-running paid off, and Inukai joined Tsuji. However, Yumiba is an attacker-killer gunner who can defeat attackers unilaterally, so the odds were not necessarily in his favor. But then Masataka Ninomiya, the captain of the Ninomiya Squad, appears.

Obishima was hoping to somehow lead the Ninomiya Corps towards him while running away from Youma, but Osamu had read his intentions and had set up a wire with his spider beforehand. Youma, who had driven Obishima into the wire zone, defeated him by attacking with the Grasshopper.

With the snipers gone, the Tamakome camp can use Chika’s bombing effectively. They try to bomb the battlefield of Yumiba with Ninomiya’s team, but Ninomiya intercepts them. Ninomiya then leaves it to Inukai and Tsuji to deal with the bombing. Ninomiya challenges Yumiba to a tiebreaker. Yumiba could have chosen to accept the challenge or not, but instead of running away, he chose to go head-to-head. He ducked through Ninomiya’s barrage to get within range, but was unable to defend against the time-delayed attack and was defeated. Yumiba’s team was also wiped out, leaving a three-on-three situation between the Tamakomain and Ninomiya teams.

|The final phase of Round 8 of the B Rank War

The final phase of Round 8 of the B rank battle. The Ninomiya team prepares to intercept the Tamakamain. And the 2nd Tamakomain was about to make a final attack. Yuuma and Shu attacked from the front and back, but they couldn’t make a decisive move and Yuuma was badly damaged by Ninomiya’s full attack. If only Chika’s position could be broken, Ninomiya’s team would have a huge advantage, so they do not move aggressively. The three Tamakamain fighters work together and try to throw Scorpions, Thrusters, and Red Bullets, but they are blocked and Chika’s location is also discovered.

|The Last Game with Ninomiya

After Chika’s position was discovered, Ninomiya’s team made their move. Tsuji and Inukai go to get Chika, while Ninomiya deals with Yuuma and Osamu. Osamu instructs Chika to defend herself while stopping one of them. Ninomiya aimed at Yuuma with a full attack, while Osamu waited for the right moment. However, Tsuji, who went for Chika, suddenly reversed and went for Osamu. The aim of the Ninomiya team was not for the two of them to suppress Chika. However, at that moment, Chika snipes Tsuji. Tsuji was wary of the Red Barret, but not of the regular bullets. Chika shot Tsuji with Ibis.

Tsuji was defeated, and Ninomiya’s guard was still open, making this a golden opportunity. Osamu aims at Ninomiya and shoots a bullet. However, Ninomiya sees through it and avoids it. But at that moment, Osamu is sure of victory. Osamu’s bullet was not a straight-line maneuvering asteroid, but a hound. Normally, the difference in power between the Asteroid and the Hound would be obvious. However, Osamu’s low power due to his low Trion level made him undetectable, and he had been able to create a foothold by pretending to be an Asteroid. Ninomiya, who had been completely outwitted, was defeated. Inukai defeated Chika, but since the final point would not change even if he did more, Inukai also chose to make an emergency escape. The final game is won by Tamakawarden 2 with 66 points.

Nazuna
In the third season of “World Trigger”, I introduced the contents of the B rank battle round 8. Chika’s inability to shoot people was also settled in a way. This is one of the best bouts in the Wartli Rank War, so be sure to watch the anime that starts airing in October!