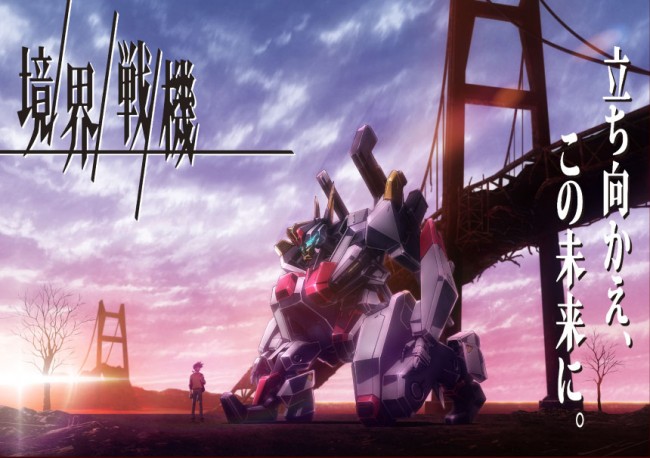 BANDAI SPIRITS and SUNRISE BEYOND will begin broadcasting and distributing the original robot animation work “Kyoukai Senki” on October 4.

In addition to terrestrial broadcasting, “Kyoukai Senki” will be archived and distributed on YouTube at the same time. This “hybrid video development” will respond to the diversified viewing environment.

In addition, a special video of the beginning of the first episode is being distributed on BANDAI SPIRITS official YouTube channel ahead of the broadcast from October. This special video is about 11 minutes long and includes the beginning of the story describing the encounter between ‘Shiiba Amou’, a boy who loves machines, and ‘Guy’, an autonomous thinking AI, as well as the opening video.

【The first episode of “Kyoukai Senki” has been released in advance! Scheduled to start broadcasting in October 2021!】

|“The story and characters of “Kyoukai Senki

The world has been divided and ruled by the four major economic blocs, and the Japanese are being oppressed as subjugated people. Japan became the front line of the world where AMAIM, a humanoid special mobile weapon deployed by each economic zone, strode about.

A 16-year-old who is not good at socializing. His hobby is collecting parts. He has been living a depressing life, but his world changes when he meets the autonomous thinking AI “Guy”.

A 16-year-old member of the Resistance. He is calm and blunt. He is in pursuit of the mysterious “Ghost,” the avenger of his father.

A 16-year-old with a mature personality. Her special skill is the naginata. Following in the footsteps of her grandfather, who was a potter, she dreams of reviving Himeno-yaki, a pottery that was abandoned after the invasion.

I-LeS (Autonomous Thinking AI), an AI with an ego, manly and sometimes wild. He and Amou are good partners in battle and in their personal lives.

An I-LeS with the same development history as Gai, it inherits data from the tactical AI used by Tetsuka’s father. Her personality is calm and she has a female voice.

I-LeS, a self-proclaimed Italian gentleman, calls himself Angelo. He may sound frivolous, but he is highly loyal to his partner, Xion.

A close-combat MAILeS (AMAIM equipped with I-LeS). The passenger is Amou. The onboard AI is Guy.

A MAILeS that specializes in shooting and sniping, with Tetsuka as its passenger. The onboard AI is Kay.

The passenger is Xion. The onboard AI is Nayuta.Main weapon is a naginata.

Japan has been divided and ruled by the major powers. A resistance organization called “Toki no Gokko” operating in the north of the country succeeds in stealing an AMAIM that was secretly being transported by the Grand Eurasian Union. The autonomous AI installed in the AMAIM hides a surprising secret, and the tide of war soon begins to rise as it is tossed about by a false intelligence.

Plastic models will also be released.

A plastic model of the mecha “Meilesbyakuchi” that appears in “Kyoukai Senki Frost Flower” will go on sale in September.

The “Kyoukai Senki” plastic model series will continue to appear in the future. The shape of the model was pursued through repeated revisions to the detailed lines, and after structural verification of the 1/1 scale model with a height of about 10 meters, which is the setting of the work, it was sculpted into a 1/72 model with the aim of becoming the “real thing.

※”Detailed images of the HG 1/72 Amein Ghost and Figure-rise Standard Sion will be released at a later date.

Scheduled for release in October
Price: 3,300 yen each (tax included)