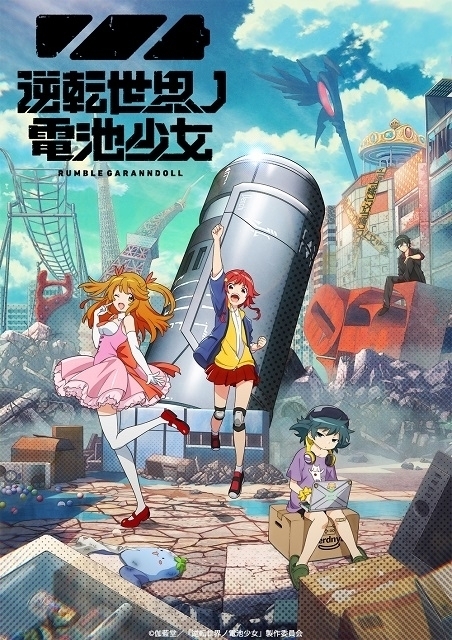 Yamashita Seiichiro, Fairouz Ai, Suzuki Aina, and Izawa Shiori will appear in the original anime “Gyakuten Sekai no Denchishoujo”. At the same time, the first promotional video was released. It was also revealed that the show will air in October.

This work is an original animation project produced by Lerche of “IDOLY PRIDE”. In the year 2019, Japan is militarily invaded by the otherworldly “True Japan”, which maintains its militarism and perpetuates the Showa era through a rift in another dimension that suddenly appears. More than ten years later, Japan is reborn as a vassal state, and in order to protect its once thriving subculture, the secret society “Arahabaki” is fighting against the true country with its main weapon “Galandor” and “Battery Girls” who fight as the power source. Directed by Masaomi Ando of “Astra from Beyond” fame, with series composition by Makoto Uesu of “Assassination Classroom” fame, character designs by Akio Watanabe of “Higurashi no Naku Koro ni Karma” fame, and character designs by Keiko Kurosawa of “Asobi Asobase” fame, and produced by EGG FIRM.

After the announcement of the cast, Yamashita said, “I think the theme of this work is ‘the strength and happiness to say I love what I love. It is entertainment that can be enjoyed with the eyes, ears, and heart without logic. Fairouz said, “This work is filled with a lot of ‘likes’, and there are a lot of attractive characters who are full of passion for what they like, whether it’s anime, games, or idols! For those of you who have been exposed to anime and other subcultures for a long time, there are some descriptions and expressions that will really stick with you, so I hope you’ll give it a look! I hope you’ll give it a look! On the official website, you can see the visuals of the characters played by each of them, as well as comments from Suzuki and Izawa.

In the first PV, Hosomichi, who acts cheerfully as the No. 1 host but sometimes has a downcast look on his face because he lives in solitude, as well as Rin, Yuki, and Misa, who fight as battery girls, appear. In addition, various characters that color the story are also depicted.

The opening theme of this work will be “Fever Dreamer” by Mia REGINA, and the ending theme will be “Reverse-Rebirth” by Aina Suzuki, who is also a voice actress in the role of Yuki Aoba.

◎Mia REGINA’s comment
The subculture of Akihabara is the root of Mia REGINA, so I’m happy to be in charge of the opening theme. I sang this song with a full charge of energy!
It’s “THE coolest anime song! I want to make the world a better place with “Gyakuten Sekai no Denchishoujo”!

◎Aina Suzuki’s comment
This time, I will be in charge of the ending theme song for the TV anime “Gyakuten Sekai no Denchishoujo”.
This is the first time in a year that I’ve done a tie-in song for a TV anime, and I also play the role of Yuki Aoba in the anime, so please look forward to the OA!

The TV anime “Gyakuten Sekai no Denchishoujo” is scheduled to start airing in October 2021.