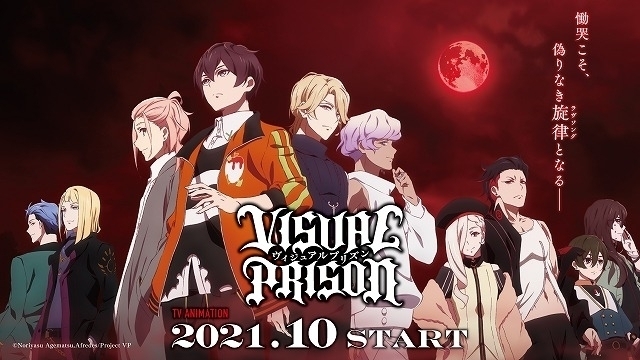 From the original TV animation “Visual Prison” which will start airing in October, the main visual and the second PV have been released. Also, Yutaka Kiyatake and Jun Utahiroba of “Golden Bomber” will be making guest appearances in the film.

Visual Prison” is set in the present day, where music-loving vampires live in darkness. The film depicts how the main character Yuki Ange gets involved in the annual vampire party, Visual Prison.

The TV anime “Visual Prison” will start airing on TOKYO MX, BS11, and other stations from October 8, 2021.

Broadcast Information
Please note that the broadcast date and time are subject to change.
TOKYO MX/Gunma TV/Tochigi TV/BS11: Every Friday from 24:00~ starting October 8
ABC TV/Me – TV: Every Saturday from October 9, from 26:30
WOWOW：Wednesdays from October 13th 24:30～ *The first episode will be broadcast for free.