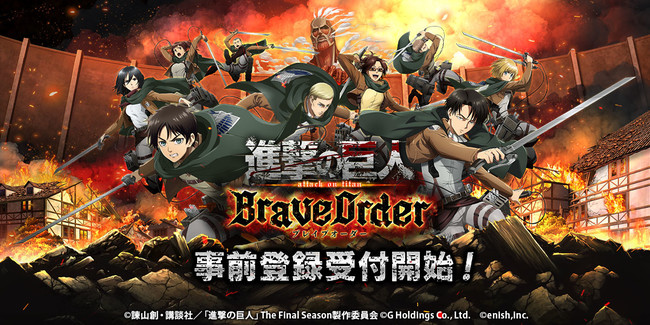 This game is the latest smartphone game based on the popular “Attack on Titan” series, which has sold more than 100 million copies worldwide. The Final Season Part 2 of “Attack on Titan” is scheduled to air on NHK in January 2022.
In this game, players become a member of the Scout Regiment along with Eren, Mikasa, and others, and fight against the mighty Titans in cooperation with many other players, just like in the original story. The game is fully voiced, including original voices, so you can enjoy the realistic world of “Attack on Titan”.

Along with the pre-registration, the first PV has been released. Please take a look.

Prior to the start of distribution, pre-registration started on Thursday, October 21. Depending on the number of pre-registered users, we will be offering a variety of special benefits.

By pre-registering, you will be able to receive notifications when the game is released.
There are three ways to do this, and you can complete your pre-registration by doing one of the following

＜Pre-registration rewards＞
If you achieve all of these goals, you will receive red brilliance stones worth 10 gachas.

|What is “Attack on Titan”?

More than 100 million copies of the book have been sold worldwide.
A world where giants control everything. The story depicts the struggle between humans and giants, separated from the outside world by a giant wall.

http://www.enish.com
Under the slogan of “Link with Fun”, enish will continue to provide attractive services that more and more customers can enjoy with the mission of “creating enish fans all over the world”.