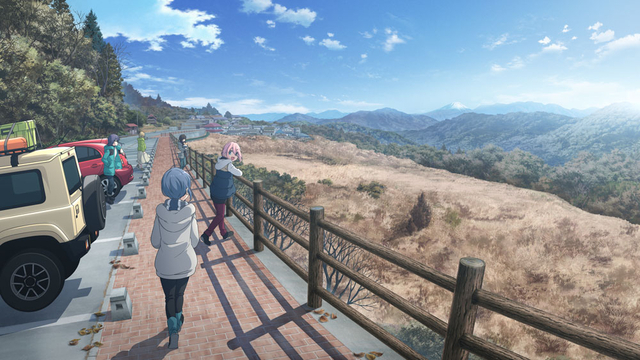 The latest in the “Laid-back Camp△” series, “Laid-back Camp△”, will be released in early summer of 2022. At the same time, a teaser visual has been unveiled, and comments from the original author Afro and director Yoshiaki Kyogoku have also arrived.

Directed by Yoshiaki Kyogoku, “Laid-back Camp△” was written by Jin Tanaka and Mutsumi Ito, with character design by Mutsumi Sasaki and animation production by C-station. The main cast will also include Yuri Hanamori as Nadeshiko Kakamigahara, Nao Higashiyama as Rin Shima, Sayuri Hara as Chiaki Ogaki, Aoi Toyosaki as Aoi Inuyama, and Rie Takahashi as Ena Saito. The main staff and cast will remain the same as in the previous series.

A teaser visual was also unveiled, giving a glimpse into the world of the film. The five Nadeshiko girls gathered in the vast grasslands below are looking a little more grown up than they have in the past. Fuji behind the mountains under the seemingly endless blue sky. Fuji in the background. Let’s wait for more information on how the five girls will be portrayed on the screen.

The movie “Laid-back Camp△” is scheduled for a nationwide roadshow in early summer of 2022.

|The full text of the comments is posted below

The script, settings, etc., were created from almost nothing after repeated checks with director Kyogoku and his team.
I hope you can look forward to seeing how the girls have grown up a bit.
I’m also looking forward to seeing the finished product, which I have yet to see.

Thanks to the many people who have supported my work, “Laid-back Camp△” will finally become a movie.
Thank you very much.
Once again, we went on location scouting trips to various places and ate delicious camp food while making the animation.
We will do our best to make this a film that will please everyone.

The TV anime “Laid-back Camp△” has sparked a camping boom, and with a long-awaited movie scheduled for next year, it’s only getting more exciting.
The “Laid-back Camp△ Handy Warmer” is a portable, oil-refueling warmer that is released every year around this time, and the new design “NADESHIKO AND SAKURA ver.” is now available, as well as the sold-out “Shima Rin ver.”, “Kakamigahara Nadeshiko ver.”, and “Nokuru ver. I hope you enjoy them!

The TV anime “Laid-back Camp” is based on the manga of the same name by Afro. It depicts the outdoor life of a group of high school girls. Delicious food, beautiful scenery, and wonderful places. Laid-back Camp”, which depicts the accumulation of such ordinary and extraordinary things, has captured the hearts of people all over the world and continues to fascinate them. The “Laid-back Camp△ Handy Body Warmer (Nadeshiko Kakamigahara ver.)” released in 2018 was inspired by the scene in the original manga (volume 6, episode 30, “The Lamp and the Body Warmer”) where Nadeshiko Kakamigahara is giving a gift to her sister who gets cold. In 2019, a design featuring “Shima Rin” will be released, followed by “Nokuru ver.”, “Chikuwa ver.”, and “Kachikachiyama ver.” in 2020, and this year, the designs of the Kakamigahara sisters will be released. This year, the Kakamigahara sisters’ design will be released. The price is 6,820 yen (tax included).

This handy warmer uses a platinum catalyst to generate heat through low-temperature combustion, making it an economical warmer that can be used repeatedly by refueling with lighter fluid or other oil. Exactly the kind of item that will come in handy during the upcoming fall and winter camping season! The characters and other information are laser engraved on the body, and it comes with a special fleece bag for storage. The new design version is available in limited quantities on amazon starting today. The re-released “Shima Rin ver.”, “Kakamigahara Nadeshiko ver.” and “Nokuru ver.” will also be available on amazon from today. The “Shima Rin ver.” and “Kakamigahara Nadeshiko ver.” will cost 5,720 yen (tax included), and the “Nokuru ver.” will cost 6,820 yen (tax included). The “Shima Rin ver.” and “Kakamigahara Nadeshiko ver.
Please note that this product is an industrial product and will inevitably have minor scratches and dents in the manufacturing process.

|What if you didn’t live in Japan?

No problem! You too can get your hands on those goodies by using our proxy service called NerzExpress.
For more information, please see the following article.