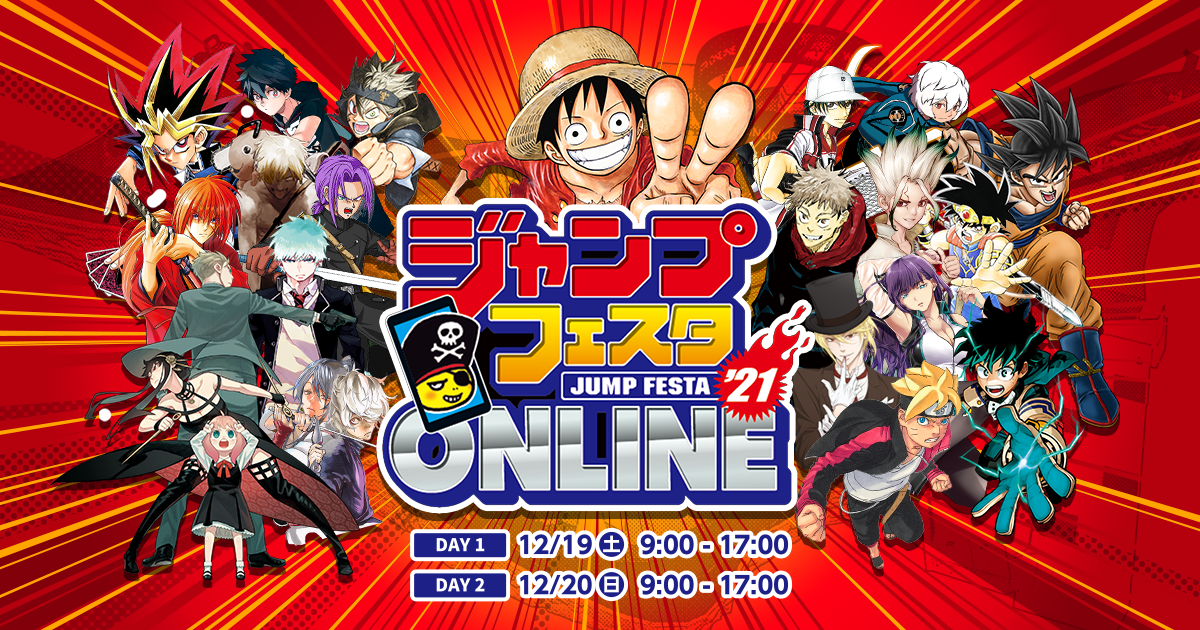 Shueisha has announced that “JUMP FESTA 2022”, a joint event hosted by the five JUMP magazines published by Shueisha, will be held in the winter of 2021. The event will be held at “JUMP FESTA Island” (virtual venue) on smartphones and at Makuhari Messe in Chiba Prefecture (real venue), and the details of the event schedule will be announced later.

This was revealed in the September 6 issue of Weekly Shonen Jump, which went on sale today, August 23. JUMP FESTA” is a fan appreciation event jointly organized by the five magazines published by Shueisha: “Weekly Shonen Jump”, “Shonen Jump +”, “V Jump”, “Jump SQ. The event is held every year on the third Saturday and Sunday of December, and in addition to the stages of popular manga works and the sale of goods, many game makers also have booths focusing on “Jump” related titles.

Last year in 2020, due to the spread of the new coronavirus infection, the event was held online for the first time as “JUMP FESTA 2021 ONLINE”. This year, the 23rd edition, in addition to the upgraded “Jan Fest Island” on smartphones, will also feature an invitation-only event at the traditional venue, Makuhari Messe. The event will be held at both virtual and real venues.

The event will be held at Makuhari Messe, and Shueisha will be preparing to hold JUMP FESTA at a real venue by considering all possible measures such as infection control and admission control. Shueisha is also currently developing an information application to help people enjoy JUMP FESTA. Details on how to participate in the event and the schedule will be announced in future issues of “JUMP” magazine.

JUMP FESTA ’22, a major event where popular works from Weekly Shonen Jump, V-Jump, Saikyou Jump, JUMP+, and JUMP SQ. will gather together, will be held on December 18 and 19, 2021!

The real event is completely by invitation only, and the method of participation will be announced on the official website and Twitter as soon as it is decided. The online event can be joined either through the smartphone app or by accessing the official site with a browser.

The biggest attraction is the “Jump Super Stage” where many popular titles from each Jump magazine will appear. From Weekly Shonen Jump, “One Piece”, “My Hero Academia”, “Dr. Stone”, “Jujutsu Kaisen”, and “Onimei no Blade” will be participating. In addition, JF limited goods that can only be purchased here and advance goods that will be sold before others can be purchased online at the EC site in the Jan Fest Store. Some of the goods will also be sold at the Makuhari Messe venue.

Further information about Janfest ’22 will be announced in the Jump magazines, on the official website, and on Twitter. Please look forward to it!

|The “Super Stage EX “BLEACH”” will be held! New information about the TV anime “BLEACH new episode” will be released on stage!

The sword-fighting battle action comic “Bleach” has sold over 120 million copies in total, and even after its conclusion, the series continues to enjoy strong popularity around the world.
Super Stage EX “BLEACH” will be held at “JUMP FESTA 2022” on December 18th (Sat) from 18:00. In addition to new information on the TV anime “Bleach: Thousand Year Blood War Arc”, the final chapter of the work whose anime adaptation was announced last year, we will also bring you information on the original art exhibition “Bleach EX.” and the Kubo Taito fan club “Klub Outside”.

For details on how to watch the stage, please check the official website of JUMP FESTA 2022.

Please look forward to new information about “BLEACH”, which is gaining more and more momentum as it celebrates its 20th anniversary, and the TV animation “BLEACH: Thousand Year Blood War Arc”, which will finally start.

【Distribution Information】
For more details, please check the official website of JUMP FESTA 2022.
https://www.jumpfesta.com/
※Jump Super Stage EX will be distributed online only. It will not be held at the Makuhari Messe venue.

Bleach is a popular sword-fighting action comic series that was serialized in Shueisha’s Shukan Shonen Jump magazine until its 38th issue in 2016. 74 volumes of the comic series have sold over 120 million copies worldwide since its serialization in 2001. The animation was broadcasted from 2004 to March 2012. In 2020, Bleach will celebrate its 20th anniversary, and the “Bleach 20th Anniversary Project” is currently underway. The popularity of Bleach is very high not only in Japan but also overseas, and it continues to grow.