A new season of “Bungo Stray Dogs” is in the works! Teaser visual released! 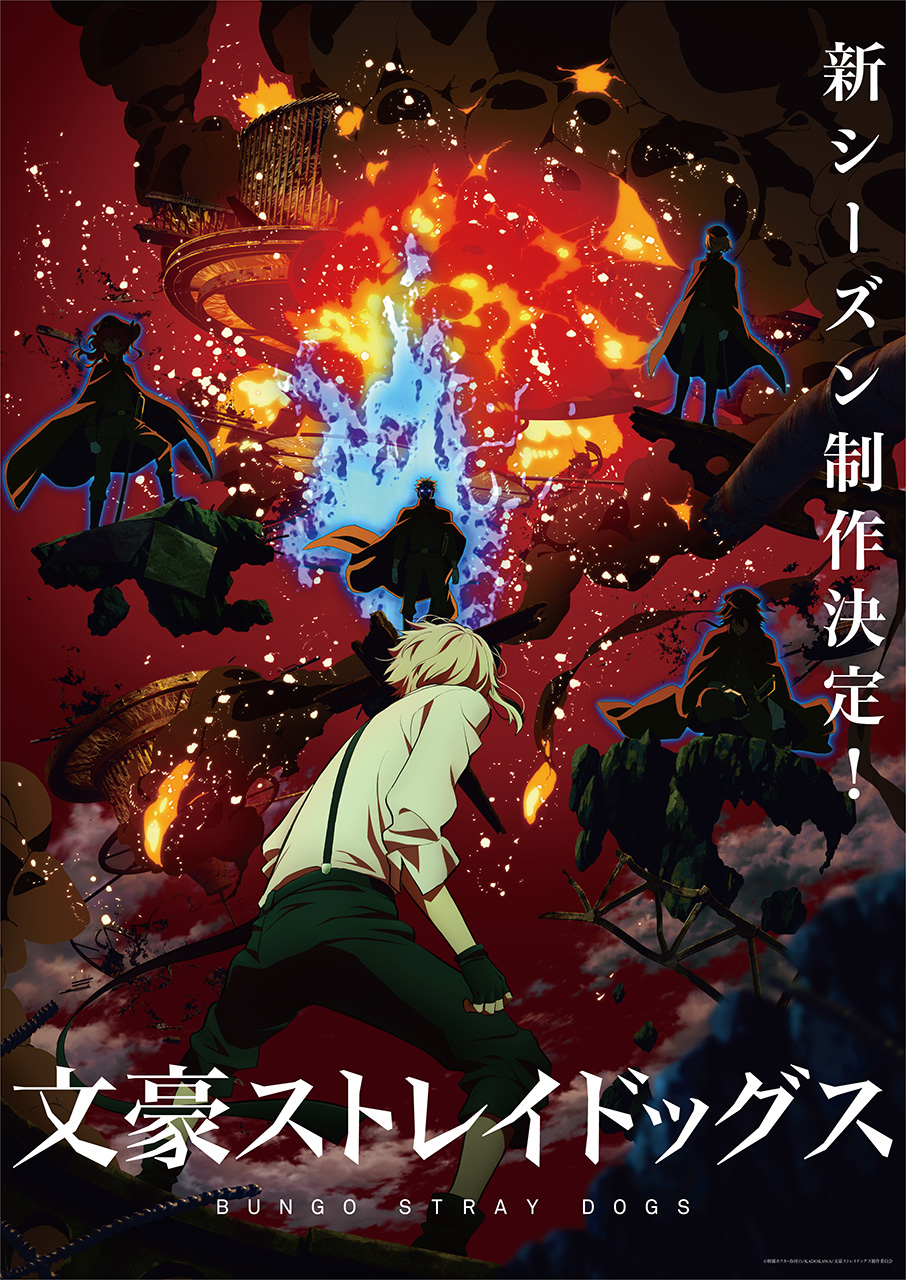 Bungo Stray Dogs” has announced the production of a new season.

Bungo Stray Dogs” is a cross-genre battle action work in which characters named after real-life literary giants such as Atsushi Nakajima, Osamu Dazai, and Ryunosuke Akutagawa are active. The manga was first serialized by Kafuka Asagiri and 35 Harukawa in “Young Ace” in 2013, and the series of related books has sold over 8.5 million copies (as of November 2021).

|A new season of “Bungo Stray Dogs” is in the works! Teaser visual released!

It has been 5 and a half years since the broadcast of the TV anime. Finally, a new season of “Bungo Stray Dogs” will be produced.

In conjunction with the announcement of the new season, a teaser visual drawn by Nobuhiro Arai, the character designer and chief animation director, has been released. After a deadly battle with the Port Mafia and the Guild, the Armed Detective Agency has confronted the “Majin” Fyodor, but what new enemy will stand in their way?  Stay tuned for more information.

|Congratulatory comments from the staff and cast have arrived!

We have received congratulatory comments from the cast and main staff of “Bungo Stray Dogs” about the decision to produce a new season.

■Yusho Uemura (Atsushi Nakajima)
Congratulations on your decision to produce a new season! Bunsto, and Atsushi Nakajima, are an important part of my life. I’m truly happy to be able to see the future of Atsushi and his friends! Please continue to support me!

■Mamoru Miyano (Osamu Dazai)
Thanks to your support, we have decided to produce a new season! The entire staff and cast are filled with gratitude! I am so happy to think that I will be able to play my favorite character, Osamu Dazai, again. I would like to stay close to his life and weave his words. Please look forward to it!

■Sumire Morohoshi (as Kyoka Izumi)
To everyone who has supported Bungo Stray Dogs so far, thank you so much for everything! I’m very happy to be able to bring you another series, and I’m excited to see what kind of image we’ll get of Kyoka. Please wait for it with anticipation!

■Taniyama Kisho (Nakahara Nakaya Battle)
The popularity of Bunsto is awesome! I can’t thank you enough for all the fans.
I hope we get to see more of Nakaya!

The new season of the anime Bungo Stray Dogs is about to begin.
Please look forward to this tumultuous series where the armed detective agency is trapped in an unprecedented crisis.
Your “guess” may change.

Congratulations to the Bungo Stray Dogs on their new season.
Thanks to everyone’s support.
In my life as an animator, it’s not often that I come across a work of this caliber.
I will cherish drawing them.

For the movie “Bungo Stray Dogs BEAST”, which will be released on January 7, 2022 (Friday), the visual, preview and music information of the movie have been released.

In addition to Akutagawa, Atsushi, Oda, and Dazai, who also appear in this visual, the cast of the stage show “Bungo Stray Dogs” has gathered together, focusing on members of the Armed Detective Agency and Port Mafia. It is a powerful video that richly depicts the world view of the “Bunsto” series.

The theme song will be “Clockwise Torque” by GRANRODEO, who also sang the opening song for the anime series three times, and the music will be by Taku Iwasaki, who has been in charge of the musical accompaniment for the entire anime series.
In addition, new cuts of the characters and the second special offer for advance tickets were also newly announced.
For more details, please check the official website of the film.