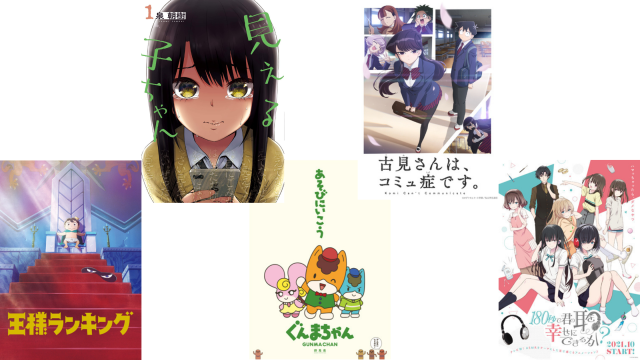 This work begins with an OP animation reminiscent of Kon Ichikawa’s “Kosuke Kindaichi” series, with a series of close-ups of the main character Miko Yotsuya’s face as she looks back anxiously. It is a clever parody that juxtaposes a famous detective who notices something that ordinary people cannot understand and a high school girl who can see something. However, while the detective’s realization solves the case, Miko’s days of hell never end as she must continue to thoroughly ignore the presence that she cannot see.
The situation in which the performer is forced to have no reaction is familiar from variety shows, and the immorality of enjoying the bewilderment in the setting where the performer is forbidden to raise her voice or time stops is pleasant. The sight of Miko’s tears from fear while feigning no reaction is a thrilling experience.

|Ms. Furumi is a communicable disease

This is a school comedy in which a high school girl, Glass Furumi, who is not good at communicating with others, aims to make 100 friends with the help of her classmate, Hito Tadano, who is normal in every way. Ms. Furumi, who is unable to speak well with others, says almost no lines that sound like lines throughout the entire story, and since monologues are not used, her voice can be heard only rarely. Therefore, her state of mind is expressed in a variety of ways, including speech balloons, subtitles, onomatopoeia, and narration.
The aspect ratio of the film changes in all directions, from standard to CinemaScope, so that it seems as if the entire screen is supporting the stubborn Ms. Furumi. In the last scene of the first episode, where she uses the blackboard for writing, the chalk dust that spills out is used to express her emotions.

Bodge is the first prince of a great king, but he is powerless and was born deaf. In this adventure fantasy, he meets his first friend, a lizard, and carves out his own destiny. The charm of the original story’s simple illustrations is preserved in this film, which is packed with the fun of animation. In particular, the sword and spear battle depicted in the third episode is as tense as in a period drama, as the two characters start slashing each other without saying a word. In addition to the battle scenes, the sign language gestures exchanged between Bodge and his friends are also beautiful, and the entire production leaves a lasting impression on the viewer.
It has been three years since “BANANA FISH” was aired in 2018, the first time Noitamina has aired two consecutive episodes. The story is still in its early stages, and it looks like we will be able to enjoy the careful anime adaptation in the future.

This heartwarming anime depicts the daily life of Gunma, a mysterious world different from the one we know. The current governor’s name is credited as the sole producer of the project, and the notation “Produced by Gunma Prefecture” has a great impact, as if it were the ultimate production committee. The main story is just as chaotic, with the main character Gunma-chan going to the bicycle race track with his uncle to learn the difference between a trifecta and a triplet, and the narrator becoming a character and touring famous places with Gunma-chan.
There is also a lineup of local specialties, including yaki-manju, Gunma’s soul food. When the magic mirror is asked about the best strawberries in the world, the magic mirror is taken to a sermon room for answering honestly without any discernment, which makes me laugh, but it also makes me think about the fact that Gunma is a conservative kingdom where the ruling party was declared the winner of the last lower house election in less than an hour. The “Gunma-chan Ekaikaku Uta” and the viewer-submitted illustrations in the corner after the ED are nostalgic in some way, making this the perfect anime for adults to watch on a Sunday vacation.

|Can I Make Your Ears Happy in 180 Seconds

This is the first TV anime series based on the theme of “ASMR (Autonomous Sensory Morphing Response),” or the comfort that can be obtained through auditory and visual stimulation. Before the main story, there is a message that says, “This program is best viewed with headphones.” The viewer can enjoy pleasant sounds such as ear scratching, soda water, and even baby talk, inviting the viewer into a world of pleasure.
In addition, the visuals are maniacal, with close-ups of the lips and mouth. A dummy head microphone used for binaural recording appears in the film, and for some reason, the surrealism of it being left on the porch of a Japanese house is also somewhat addictive. The official website introduces the voice actors who appear in the game, and I can’t help but notice that the only male voice actor cast in the game is Hayami Tsutomu. I can’t wait to see how his low-pitched voice will be expressed in ASMR.