The protagonist is an outlaw⁉”Trapped in a Dating World is a tough world for mobs” is getting a TV anime! PV and cast comments released! 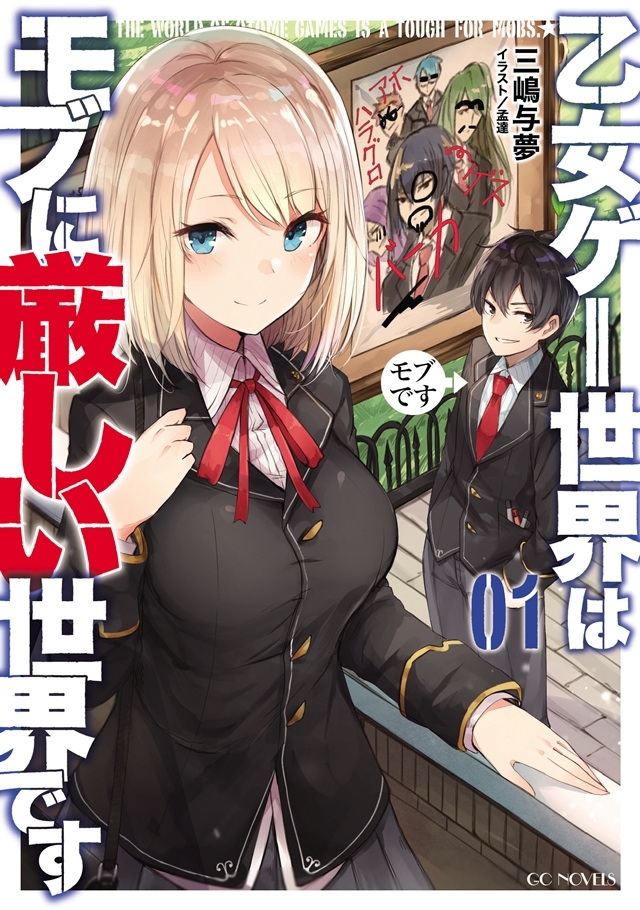 A TV anime adaptation of the popular fantasy novel “Trapped in a Dating World is a tough world for mobs” (GC Novels) has been decided.

Trapped in a Dating World is a tough world for mobs” (original story by Yomu Mishima, illustrations by Meng Tatsu) is a fantasy about the protagonist, Rion, who is reincarnated as a mob character in the world of an “otome game” of swords and magic. It is a fantasy where the protagonist, Rion, is reincarnated as a mob character in an “Otome Game” world of swords and magic.

To commemorate the release of the TV anime, a teaser visual featuring the heroines Olivia and Angelica and the main character Rion has been released.
While Olivia and Angelica have cheerful expressions on their faces, Rion’s “mob-like” appearance is symbolized in the illustration.

In the PV, the main character, Rion, who wakes up in the world of otome games, rebels against the crown prince, Julius and his friends in the unreasonable society of “female chauvinism.

The TV anime is directed by Kazuya Miura and Shinichi Fukumoto of “Uzaki-chan wa yasutai! series composition is by Kenta Inohara of “Yojo Senki”, character design is by Masahiko Suzuki of “When the Ultimate Full-Dive RPG is Shittier than Reality”, and animation production is by ENGI of “Detective is Already Dead”. will be in charge of the animation production.

Lion Fo Waldfahrt
CV︓ Takeo Ohtsuka
The third son of a humble baronial family in⽥sya.
He is cynical and has a high level of agitation skills, but he is kind at heart.
In fact, he is a reincarnation of a man who played this world as a game, and is struggling to live a normal life as a mobster in the male-dominated world of otome games.

＜Cast Comments
What was your impression of the work when you first read it?
The stage of this work is a world with various settings, but I thought it was unique in that it was designed to make men’s legs extremely vulnerable. It is very interesting to see Rion trying hard to live peacefully as a mob character in such a world, but he is not doing well.

About the character that will be played by Noev.
To make a word out of it, Leon has a bad personality (laughs). He has a bad gut and makes rapid movements that agitate people. However, while he is basically calculating, he also has a kind side that reaches out to those in need. I hope I can express the twisted Leon who shows various expressions in the film.

Functions for everyone who is looking forward to the broadcast.
It is exhilarating to see Leon destroying the various things that cannot be done. Please wait for us to tell you the story from the perspective of harsh mob characters, not the main characters of the games.

Olivia
CV︓Kana Ichinose
A commoner from the countryside who was specially admitted to a noble academy.
She has a core and a simple charm.
She is one of the few people who can use recovery magic, and is a very talented woman. In the game, she was the main protagonist and the main target of the mission.

＜Cast Comments
First time reading your work
It’s supposed to be a world of games, but there are battle scenes with fighter jets, and it betrays my expectations in a good way!
The story is filled with gags, cute double heroines, Olivia and Angelica, and handsome kings.
I thought it was a work filled with many different elements!

About the character you play
Olivia is originally the heroine in the world of Kinetix multi travel games, but she lost her position to Marie. lol
She is kind, can tell her partner what she thinks is wrong, and is a straightforward and good person who tries to move forward despite all the things people say. He is especially cute when he is shy and embarrassed!

A message to everyone who is looking forward to the broadcast
The characters have strong personalities one by one and the gag scenes are also very cheesy, so I hope a lot of people will watch it!
The Kings are especially cheesy. (laughs)
It’s a different kind of cross-world rebirth!
So there’s still a little more time until it airs, but please look forward to it!

Angelica Rafa Redgrave
CV︓ Ai Fairouz
The fiancée of the Dauphin and the daughter of a duke, the second most powerful family after the royal family.
She is a sincere and strong woman who hates crooked things.
In the game, she was the villainous daughter who bullied the main character.

＜Cast Comments
What was your impression when you first read it?
When I first read the original work, I thought that the male protagonist turning into a game world was a fresh start!
I have also played those games, so I have a lot of experience with them.

About the character you play
Angelica is a woman who plays the role of a villain in the game, but she is really a wonderful and loving woman, so I hope you like her.

A few words for those who are looking forward to the show.
We’ve never seen this show before, so you’ll never know what’s going to happen next! We hope you enjoy it!

In commemoration of the TV anime adaptation, congratulatory illustrations have arrived from Meng Tatsu, the original illustrator, and Ushiozato Jun, the comicalizer.

<Introduction
I’ll make it, even if it’s from the “mob” world.
Leon, a young woman who has traveled to the world of swords and sorcery.
The only exception is the handsome army led by the game’s target, Wang Tae Du.
The only exception is the handsome army led by the king’s son, who was the target of the game. However, there is one weapon that can be used against the oppressed and desperate Leon.
He was forced to do the same thing in his previous life by his sister.
Rion’s ultimate goal was to spend his time as a mobster in the countryside.
He uses his knowledge of the game to rebel against the handsome men and the military who want to do whatever they want.