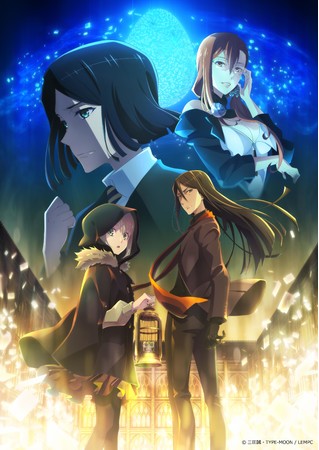 “The Case Files of Lord Elmeroy II,” based on the legitimate and supreme magic mystery by Makoto Mita, was broadcasted as a TV anime at the end of 2018 and from October to December 2019 and was well-received for its delicate character portrayal and profound worldview.

A special edition of the all-new anime “The Case Files of Lord Elmeroy II – Grace note” will be aired in the “Fate Project New Year’s Eve TV Special 2021” on December 31.

“Special Edition” key visual drawn by Jun NakaiWith the announcement of this information, the key visual drawn by Jun Nakai, the character designer, was also released. The visual depicts Lord Elmeroy II and his apprentice Gray, Waver Velvet, the younger version of Lord Elmeroy II, and Touko Aozaki, who is making her first appearance in the “Case Files of Lord Elmeroy II” anime. In addition to the details of “Fate Project New Year’s Eve TV Special 2021”, please look forward to more information.
After the special edition broadcast, an online talk event by the anime production staff will be held on January 8, 2022. Tickets for the event, which will feature director Makoto Kato, character designer Jun Nakai, and others, will go on sale today.

◆Program Name
Fate Project New Year’s Eve TV Special 2021
◆Broadcast Date
Friday, December 31, 2021 22:00-23:55
◆ Broadcast Stations
TOKYO MX, BS11, Gunma TV, Tochigi TV
♦Program Outline
“Fate/Grand Order -The Sacred Round Table Camelot: Part 2 Paladin; Agateram” and “Fate/Grand Order -The Final Singularity: Crowned Temple of Time Solomon -On the New Year’s Eve of 2021, when “Fate/Grand Order” was theatrically screened, we will be releasing information about TYPE-MOON’s works, including theatrical works that were released and Fate/Grand Order related titles.
We will also be broadcasting a special edition of the all-new anime “The Case Files of Lord Elmeroy II: Grace note”! In addition, a part of the episode from the 2nd season of the OVA “Fate/Grand Carnival,” which is currently on sale, will be broadcast for the first time in the program!
Let’s enjoy the New Year’s Eve of 2021 with Fate, from the latest information on various works to the first footage released!