Mieruko-chan discussion! Miko’s father is dead? And about her past, mother and brother. 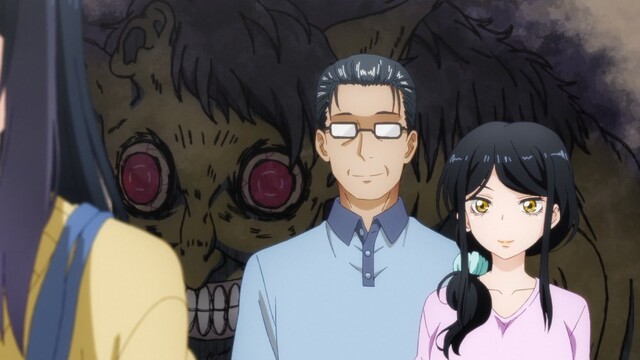 The protagonist of “Mieruko-chan” is a high school girl named Miko Yotsuya, who can “see” all kinds of strange and dangerous people.
Miko has a family of four, and her family also appears in the story, but there is a past between Miko and her father that cannot be told without tears. In this article, I’ll explain if Miko’s father is dead in Mieruko-chan, and I’ll also give you a spoiler-filled summary of her mother, brother, and past!

Here’s a spoiler-filled explanation as to whether Miko’s father is dead!

Miko’s father appeared in episode 9 of the original manga. When Miko woke up and went from her room on the second floor to the living room, her father, mother, and younger brother were gathered at the dining room table. The family talked to Miko as if it was expected, and there was a regular family routine, but the only strange thing was a peculiar and dangerous guy who haunts the father.
The only strange thing was the presence of the weird and dangerous thing that haunted her father, but only Miko could see it.

Her father had been a normal part of the family conversations without any discomfort, but he had died within the past year.
I was so focused on the existence of the bad guy that I didn’t think he was already deceased.
Because Mieruko-chan is written from Miko’s perspective, the deceased father appeared as if he were still alive.

The father seemed to be very worried about Miko in the conversation, but it had something to do with the past events between the father and Miko. I will explain more about the past of Miko and her father later.

The cause and circumstances of Miko’s father’s death.

The circumstances of Miko’s father’s death and the cause of death have not been revealed. The deceased father appeared only once in the original story, and the end of Miko’s father was not mentioned until episode 37.

|[Mieruko-chan] Spoiling the past of her father and Miko

Here’s a summary of what happened to her father and Miko in the past!

Miko’s father had eaten Miko’s pudding before she died. Miko got angry when he ate her pudding and had a big fight with her father.

Because of this past, even after his father passed away, Miko’s younger brother would jokingly say, “Write your name on the pudding that Miko bought, or you will be eaten again.

Dad and Miko couldn’t make up.

The father and Miko had a big fight over pudding, and the father died without making up.
This suggests that her father’s death may have been sudden and unexpected.
Miko must have regretted her father’s death.
She bought a pudding for herself at a convenience store and offered it to her father’s Buddhist altar.

Miko’s father said that he had always wanted to apologize to Miko for the fight that had broken up between them.
The father and Miko were able to make up, although they could not talk, the reason for the deformed yabaiya to the father remains unknown.

Here’s a list of the main character, Miko Yotsuya’s, family in one sentence!

Miko’s father’s name is unknown.
He was already deceased and died within a year, but it is not clear when he died, how or why, or the cause of death.
She had a big fight with Miko because she ate Miko’s pudding without permission before she died, and she regretted that she died without being able to make up with Miko.
She still cares about Miko even after her death. Now that she can see Miko, Miko offers her pudding to her father’s altar, and they can make up indirectly.

Miko’s mother’s name is unknown.
She is a beautiful woman who looks just like Miko, and her body shape is almost the same as Miko’s, so Miko tries on clothes for her mother’s birthday present.
Since she doesn’t appear in many scenes, there is no detailed information about her.

Miko’s younger brother is an elementary school student, and his name is Kyosuke Yotsuya.
He loves his sister, and when he notices a change in Miko’s behavior and thinks she has a boyfriend, he follows her home from school.

She has a strong sense of justice, and when she imagines that an evil man is deceiving Miko, she says, “I will protect my sister! When she imagines that a bad guy is cheating on Miko, she says, “I’ll protect my sister!” She also rushes into the bathroom while Miko is bathing, thinking that he might have a hickey on his body if she has a boyfriend.
After that, he worries about Miko and looks for her when he can’t reach her at the shrine.

|What is the mysterious column in Mieruko-chan? Is it a stairway to heaven?

The protagonist, Miko Yotsuya, and her best friend, Hana Yurikawa, visit a donut shop, Mrs. Donut, or Mised, to eat donuts in order to recover from the mental depression caused by seeing too many dangerous people.

Miko and her best friend, Hana Yurikawa, find themselves standing in the wrong line at Mised.
What is the nature of the mysterious line that Miko got in?
In this article, I will explain what the mysterious line is in Mieruko-chan, and discuss whether it is really a stairway to heaven!

[Mieruko-chan] What is the mysterious line?

A mysterious line of dangerous people.

A mysterious line is a line of dangerous people. They are characterized by their very human-like appearance.
They look like ordinary spirits and look harmless, but they are quietly lined up in the mysterious line.

The ones that are in trouble will be eaten.

|[Mieruko-chan] What is the identity of the mysterious line?

Is the mysterious line a stairway to heaven?

Where the mysterious line appears.

There are two places where the mysterious rows appear until episode 37.
The back alley next to Mrs. Donut
The drink bar at Cafe Restaurant Guast

|[Mieruko-chan] Considering whether the mysterious column is a stairway to heaven.

From here, we’ll consider if the mysterious column is really a stairway to heaven!

Is the mysterious line a line of spirits that will come of age?

The mysterious row may be lined with spirits that will become Buddhas.
The reason for this is that the mysterious rows are lined with spirits that have served their purpose after death. One time, Miko met an old woman who seemed to have dementia, cowering on the stairs of a pedestrian bridge at night.
As she tried to carry the old lady home on her back, she noticed the presence of a yabai-yatsu outside the house.
At first, Miko was frightened by the appearance of the spirit, as it was a male spirit that repeatedly said “Yon, Roku, San, Ichi” as it approached Miko and her grandmother.

At first, Miko was afraid of the spirit’s appearance, but then she realized that the spirit wanted to tell Grandma a number, so she typed “4631” into her phone and showed it to Grandma.
When she saw the number, she was able to unlock the safe, which she had been unable to do so many times before.
The male spirit outside her house was her husband, who had stayed at this place to tell the number to her grandmother, who had forgotten the key to the safe.

The man’s spirit, who had accomplished his unfinished business through Miko, expressed his gratitude to Miko.
The next day, this man’s spirit stood in a mysterious line and was eaten by a monster waiting for him at the end of the line. It can be inferred that this man’s spirit was in a state to fulfill its purpose after death and become a Buddha, so it is possible that the mysterious line is lined with spirits who will become Buddhas.

In this sense, the mysterious line may be a stairway to heaven.

The destination of the mysterious row of spirits is unknown.