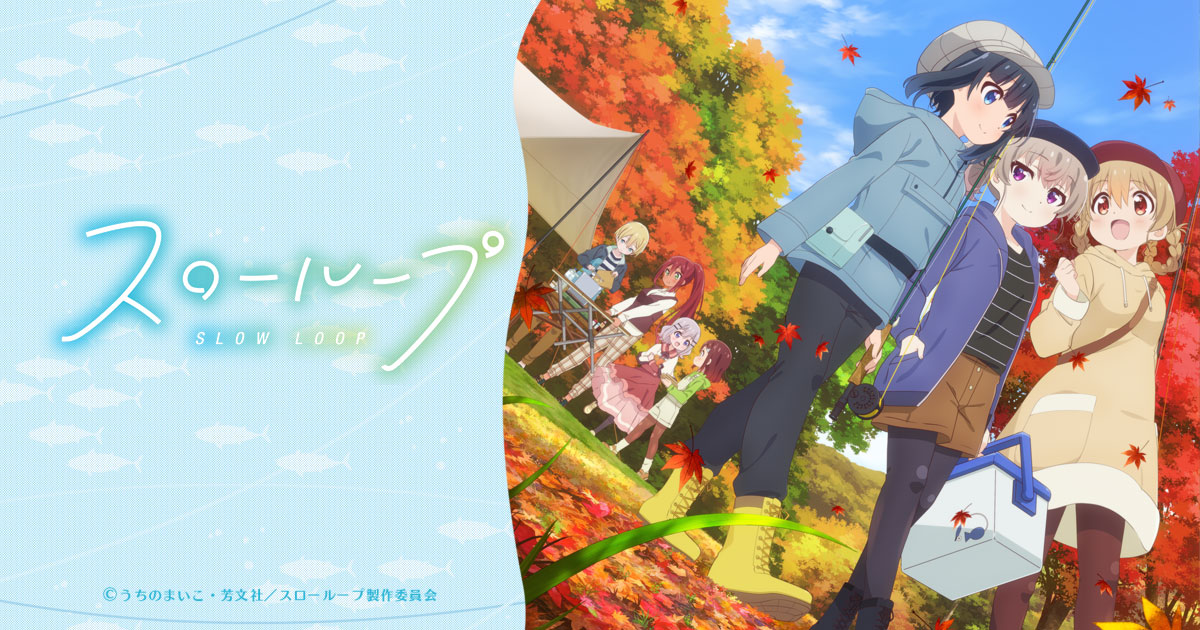 From TV anime ‘Slow Loop,’ which will start in January 2022, the second PV, additional characters, casts, OP theme, and ED theme information have been released.

Slow Loop” is a manga serialized by Maiko Uchino in “Manga Time Kirara Forward.” This is a girls’ story about two first-year high school students who become “sisters” after their parents remarry and how they deepen their bond through fishing. Hiyori is a fly fisherman who was taught how to fly fish by a deceased father, and Koharu is an innocent girl who is good at cooking.

Hiyori and Koharu, who became sisters after their parent’s remarriage, enjoy fly-fishing in the ocean.

Hiyori is a young girl who enjoys fly fishing, which her late father taught her.
While fishing, as usual, she meets Koharu, an innocent girl who suddenly wants to go into the sea.
The two decide to go fishing together, but they are the daughters of their parent’s second marriage…?
Why don’t you join Hiyori and Koharu, who have become “sisters” through a chance encounter, and spend a slow time together while “fishing”?

Second Key Visual Revealed!
The second key visual of TV anime ‘Slow Loop’ has been released.
As the leaves of the trees turn red and yellow, Hiyori, Koharu, and Koi, who are going fly fishing, and Ichika, Futaba, Aiko, and Kaede, who is starting to cook, are enjoying fishing camp.

The second PV of TV anime ‘Slow Loop’ has been released.
The video contains more charm and relationship between Hiyori Kainagi, Koharu Kainagi, and Koi Yoshinaga.
In addition, OP theme ‘Yajirushi’ and ED theme ‘Shuwa Shuwa’ have been released for the first time in the second PV.

The second character information of TV anime ‘Slow Loop’ has been released.
Ichika Fukumoto, who works as a captain at a fishing boat shop, will be portrayed by Kaori Nazuka, Futaba Fukumoto, a fifth-grader good at bait fishing, by Natsumi Murakami, and Futaba’s friend, Aiko Ninomiya, by Honoka Inoue.

Futaba’s older sister. She works as a captain at a fishing boat shop that Koi’s father often visits.
She is very fond of her younger sister, Futaba, and also likes alcohol and young girls. She also enjoys drinking and young girls. She tends to slack off a bit at work.
Birthday: August 2
Height: 168cm

Fifth-grade elementary school student.
A friend of Futaba.
Not good at boys or studying.
She cannot touch insects or live fish but participates in fishing trips to get to know Futaba. She is very emotional and active in things she likes.
Birthday: September 22
Height: 136cm

The OP theme and ED theme of the TV anime ‘Slow Loop’ has been decided.
The OP theme will be “Yajirushi,” the debut single of the unit Pokapoka Aeon by Nao Higashiyama and Kiseyono Anno, both of whom are active as voice actors and artists, respectively.

The ED theme is “Shuwa Shuwa” by Three ∞ Loop, a unit consisting of the three main characters, Hiyori Kainagi (CV: Rin Kusumi), Koharu Kainagi (CV: Natsumi Hioka), and Koi Yoshinaga (CV: Tomomi Minai).
You can listen to both the OP theme and ED theme in the second PV of “Slow Loop,” so please check it out as well.

▲From left to right: Nao Higashiyama and Kiseyono Anno.

<Delivery Information
Simultaneous and fastest terrestrial distribution on the d-anime store!
d-anime store From January 7, every Friday from 10:30 p.m.
Other sites to follow

by Maiko Uchino “Slow Loop
It is serialized in “Manga Time Kirara Forward” (released on the 24th of every month).
Comics volume 1 to volume 4 is on sale now!
The latest volume 5 of the book will be released on December 10!