What is the power of the screen that led “Mobile Suit Gundam Hathaway” to become a huge hit? Interview with the director, Shuko Murase (Part 1) 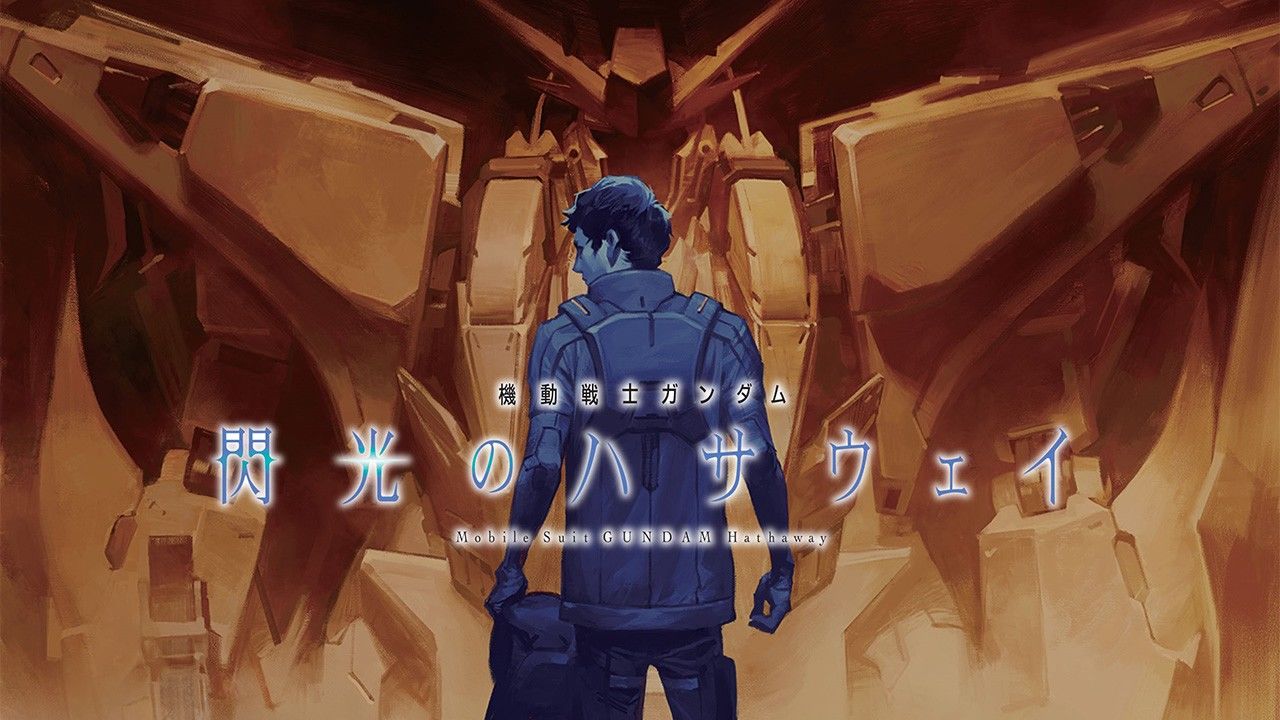 The film adaptation of this work was directed by Murase Shuko. He is an animator/character designer known for his detailed drawings backed by an aesthetic sense, and as a director, he has been highly acclaimed for his live-action approach in “Slaughterhouse-Freezer”. As a director, he is highly acclaimed for his live-action approach in films such as “Slaughterhouse.” In the film “Mobile Suit Gundam Hathaway,” he has created a new image of “Gundam” by creating a screen full of so-called cinematic dynamism.

|Wanted to visualize the flavor of Tomino’s novel.

――It has been about six months since the release of Mobile Suit Gundam Hathaway. It has become a big hit, with box office receipts of 2.2 billion yen and 1.08 million viewers (*as of November 21, 2021). What do you think of this result?

Murase: To be honest, I don’t know how big the box-office receipts and the audience numbers are, since the Gundam series is a very well known work. But when everyone said that it was a success, I felt that we had managed to meet a certain standard. That’s my honest impression.

――Has Director Murase received any feedback from the fans?

Murase：I don’t get to visit them directly, but people who work in the animation industry come to see me, which has never happened before (laughs). (laughs) That kind of thing makes me think that I’m hitting the right notes with the right people. That’s the feeling I get.

――I would like to ask you again about the process of making this film. This film is based on the novel of the same title written by Tomino Yoshiyuki, the director of “Mobile Suit Gundam”. How did you plan to portray Tomino’s taste in this film adaptation?

Murase：When I read the novel, I thought it had a certain taste that I couldn’t see in Tomino’s films. I wanted to visualize the flavor of the novel without cutting out those parts.

――So you tried to make use of the flavor of Tomino’s novels, which is not present in Tomino’s animated works.

Murase：I had worked with Tomino-san a long time ago (“Mobile Suit V Gundam,” “Mobile Suit Gundam F91,” “Mobile Suit Z Gundam: A New Translation – He Who Inherits the Stars,” “Mobile Suit Z Gundam III: A New Translation: The Pulse of the Stars is Love”, etc.), I realized that the image that Tomino-san was looking for in “Gundam” was different from the one I had felt. I had thought that “Gundam” was a work that emphasized visual reality more than other works. However, Tomino-san emphasized the pleasantness of the animation rather than the world view, explanation, or reality. In some cases, even if he had to cut the world view and explanations, he would give priority to the pleasant feeling.

――In the novel, there were parts of …… that were cut out in the anime, such as the so-called world view and explanations.

Murase：That’s right. The earth’s environment, the earth’s population, and what kind of lives these people lead. In the novel, the world view is put into words with reality. When I read the novel, the feeling I had after reading it was exactly the same as the feeling I had before with Gundam. I thought it would be interesting to visualize that feeling. I wanted to scoop up as much as possible of what was written in the novel.

――Did you have a chance to talk directly with Tomino himself about Mobile Suit Gundam Hathaway?

*Newtype
A term used in the Gundam series to describe humans with new senses.

――It seems to be a pretty direct hint.

Murase：About half a year later, I had another meeting with Tomino-san, and he introduced me to a film. I thought it was a message of “Make this kind of film! I looked for the video and found it at ……. There were parts of that movie that I could relate to the feelings of the main character, Hathaway, but I couldn’t put them together. This time, I tried to incorporate the taste of that movie into the scenario, but it didn’t work out. When I asked Tomino-san again, I found out that he hadn’t seen the whole movie, but just happened to have a good impression of a scene he saw, so he told me about it. I thought maybe he was referring to the feel of the characters or the balance and style of the film, but basically it was the atmosphere lol. The movies were both interesting, but I still don’t know what Tomino meant by that.

――You mentioned earlier that you tried to visualize the details of the novel, but you also went to Davao, the Philippines, where the film is set, for location scouting.

Murase：Tomino-san had never been to Davao when he wrote the novel. That’s why this novel was written using only materials. That’s a great thing. ……

Murase：Nowadays, with the improvement of the internet environment, location scouting can be done on the web. However, there are still some things that you can learn about overseas by going to the scene. This was the case with my previous work, “Genocidal Organ,” when I did a lot of location scouting in Europe. This time, too, I was able to visit Davao, although the time was limited to about a day and a half, and it was very helpful.

――What kind of place was Davao like when you actually visited there?

Murase：I didn’t know much about Southeast Asia at all, and I had heard that Davao was quite a dangerous place. However, Davao was completely different from the image I had of the Philippines and Southeast Asia. I had an image of Southeast Asia as being damp and hot, but Davao had a rather crisp and clean atmosphere that was easy to live in, and I had a feeling that it would develop into a resort like Hawaii. I took a lot of pictures and visited the facility that serves as the model for the botanical park that appears in the film. On the way to Davao, I also spent a few hours in Manila in transit, and the differences between Manila and Davao were also helpful. I think the location hunting turned out to be quite meaningful.

――I was very impressed by the beauty of the sky, beaches, and ocean of Davao depicted in the main story of Mobile Suit Gundam Hathaway. I guess you could say this is the result of location hunting.

Murase：That’s right. Even when the sky in Davao is clear, there are a lot of clouds. I think we were able to reflect this in the film quite well. During the location shooting, it sometimes rained, but unlike rain in Japan, it soon cleared up and the air became crisp and dry. Basically, it’s always summer and it rarely rains all day, and there are no typhoons. I wanted to create that kind of atmosphere in the film.

――I heard that you took a lot of photos during the location scouting, but what were the main areas you took photos of?

Murase：I went on location scouting after the scenario was written, so I had an idea of where I thought the material would be for the scene, but since I was on a forced march, I just kept shooting and shooting. When I came back, I looked at the photos and rearranged them into a whole.

――Did you use photographic references in drawing the background, or did you use them in storyboarding and layout?

Murase：I did location scouting in Davao, but I didn’t plan to use the local locations as they were at the time. After returning to Japan, I searched on the Internet and decided on a model that I thought would be good here. In order to create a cityscape, location scouting was just a stepping stone, and I gathered materials and fleshed it out as I went along.

――Hathaway buys “souvenirs (novels) that anyone would buy” in the city of Davao. There was also a scene where he rides around in a fancy cab. How did you make these small items and vehicles?

Murase：That area wasn’t done on location, but came from the designer’s idea. For example, when we were working on the character design for the cab driver, there was a picture of a colorful cab, and at first I thought it was a little too strong, but then I thought it was interesting, so I made the cab design colorful. The souvenirs of Hathaway were drawn by the designer. I think we were able to successfully place the ideas of all the staff in that area.

|Hathaway’s character aspires to be a “man of resolve.

――In the movie “Mobile Suit Gundam Hathaway”, the main character Hathaway, who calls himself Mufti Nabiyu Erin, the leader of the anti-Earth Federation government movement, is carefully portrayed as a man of harsh means and a mind lost in his own ideals. How did Murase see Hathaway as a person?

Murase：As I read the novel over and over again, I began to see different parts from when I first read it, and I thought that Hathaway was actually a man who was not yet ready for something like that. The more I read, the more it seemed that way. The more I read, the more it seemed that Hathaway was a man who was determined to become a man with determination, but who also knew that he couldn’t become one. It’s a story about a guy who knows he can’t be a man. I think that’s the story of Mobile Suit Gundam Hathaway. I wondered what such a character would be like as the protagonist of a Gundam series, but that’s what Tomino was writing about. In the game, there is Hathaway who is completely becoming the Mufti, but in the movie, he is not. I thought it would be more interesting to focus on the existence of Gigi, who shakes it up.

――Hathaway tries to become a Mufti with the existence of Char from the Gundam series in mind. What kind of existence do you think Char was for him?

Murase：Hathaway and Char are basically unrelated. There is almost no connection between them. The only contact he has with Char is the moment that was redrawn in the film (the scene in “Mobile Suit Gundam: Char in Counterattack” where Char and Hathaway meet at Rondenion in the space colony and the girl he was with, Quess Paraya, runs off to join Char). And since Quess was taken away from him at that time, there’s no way he could have admired Char. However, Hathaway becomes tainted with the same ideology as Char. This process is not described in the novel, so I thought that this movie would be a good place to depict it. I think that’s what I’ll be depicting in the second part and onwards. Amuro and Char will be the key to Hathaway’s inner life in Part 2 and Part 3.