What is the power of the screen that led “Mobile Suit Gundam Hathaway” to become a huge hit? Interview with the director, Shuko Murase (Part 2) 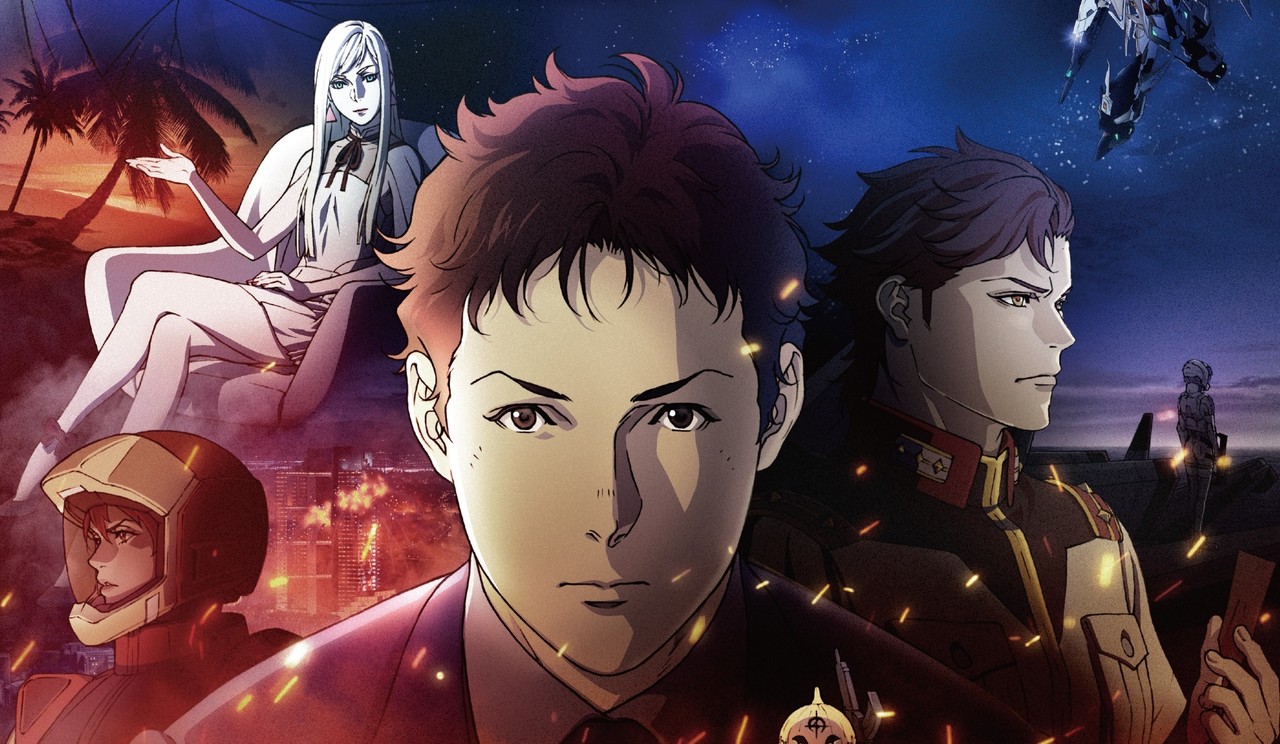 What was Director: Shukoh Murase thinking when he created this work? In the second part, he talks about the heroine Gigi Andalusia and the Earth Federation Forces. In the second part of the interview, he talks about the heroine, Gigi Andalusia, whom the main character, Hathaway, meets, the character of Kenneth Slegg, a soldier in the Earth Federation Forces, and how he depicted the mobile suit battles that are the highlight of the Gundam series.

Aiming for the image of a Tomino heroine who is loved by everyone.

――The inner life of Hathaway, the main character of the film, is portrayed as he is pushed around by a girl named Gigi Andalusia. What kind of impression did you have of this girl, Gigi?

Murase：When I read the novel, I thought, “Gigi has a strong Tomino heroine quality. Rather than being attracted to her personality, I felt that she was often a character that I was drawn to. When I thought about how I could get the audience to like her, I realized that she would have to be so beautiful that they would be willing to turn a blind eye to her character flaws. However, it is incredibly difficult to draw a beautiful girl in anime. However, Pablo UCHIDA (character designer) came up with various ideas to draw Gigi, such as the fashion and the orange irises in her eyes. I think pablo uchida’s sense of style was a major factor in the overall design of Gigi.

Then there are the voice actors. I still couldn’t grasp the image of Gigi when I started storyboarding. I had a feeling that I was being dragged into the image of the heroine from the previous Gundam series. Then, I had an opportunity to audition for the role of Gigi, and Rena Ueda gave me a different approach to the role. That was the first time I realized that this was the way Gigi talked. I was able to grasp that, and I finally created my own image of Gigi.

――Gigi, played by Mr. Ueda, was very impressive, changing his expression from time to time.

Murase：TominoThe heroine is a strong-minded person, so she says to her partner, “Don’t say that ……. If she hears it with normal theatricality, she will say, “……What? But with Mr. Ueda’s theatrical style, it’s not so easy. But with Mr. Ueda’s theatrical style, it becomes a little softer. In this way, I tried not to change the image of the woman that Tomino had written, but to change the way it was presented, and to achieve a balance that would be tolerable to the audience.

――You mentioned earlier that it is difficult to draw beautiful women in animation.

Murase：To put it in an extreme way, if you write about all the people who are not beautiful, you can make only one of them look beautiful. But you don’t want to do that (laughs). (laughs) So, if you want to draw everyone beautiful and cool, you have to make the beautiful women look incredibly beautiful. That’s difficult, isn’t it? It’s better for the character to have some quirks, but if those quirks are too strong, the character will not be considered beautiful by everyone. It’s difficult to create a design that everyone likes while still making the character stand out. It’s a matter of technique, but Pablo uchida did a great job of putting it all together, and Naoyuki Onda (character design and animation director) was able to translate it into animation.

――The animated Gigi spins his ballpoint pen, yawns, and his gestures and theatrics are lively and appealing.

Murase：Gigi’s penmanship was the idea of Shinichiro Watanabe (storyboard artist). When I saw it on the storyboard, I was surprised too. I hadn’t imagined it at first, but I thought, “Gigi would certainly do something like this. She’s not just a sophisticated girl, but she also has a childlike innocence about her. I think the penmanship brought out a certain part of Gigi. Not only that, but the animators were able to draw various expressions on Gigi’s face to bring out her various charms.

――This time, the love triangle between Hathaway, Gigi and Kenneth is thrilling. What kind of character did you want to portray in Kenneth Slegg, the soldier?

Murase：The whole composition was to see which of the two men (Hathaway and Kenneth) Gigi would choose, so I was aiming for the line where Kenneth was just barely a romantic interest, even though he was older. Since Hathaway was a simple, ordinary guy with a face that blended in with the masses, I thought Kenneth should be a good guy. I had a lot of discussions with Pablo uchida about this, and he gave me a wild-eyed design that contrasts with Hathaway.

|Aiming to Return to the Origin of Mobile Suit Warfare

――So you built up the way to draw mobile suits from the world view.

Murase：I often said to mecha artists, “I don’t want you to draw mobile suits, I want you to draw the phenomenon of mobile suits. I wanted to portray mobile suits by depicting the various things they cause, such as wind and smoke. However, the texture of the story was something that I had imagined when I read the novel.

――The air raid scenes had a true sense of realism in the destructive power of the weapons fired by the mobile suits and the sparks flying around.

Murase：When mobile suits fight in the sky above a city, sparks fly, debris falls, and the people underneath can’t stay calm. I don’t think there have been many depictions like that in the Gundam series, but since it’s a war story, I think it’s better to depict it that way. After all, one missile or one Vulcan hit will kill a person. The Vulcan cannon has become a weapon that has no effect even if it hits a mobile suit, but it is supposed to have this level of destructive power. I was trying to depict the amount of damage that would be caused if mobile suits fought in a city. There were still some parts that I couldn’t finish in terms of drawing process, but I tried to draw those parts somehow. However, by drawing the surroundings in this way, I feel that I was able to depict part of the phenomenon of mobile suits.

|The Potential of Film as a Medium

――In a past interview, Director Murase mentioned that he used color keys (color script) and shooting boards to create the images. Do you think that the realistic colors in the air raid scenes and the battle scenes in the latter half of the film were due to such production methods?

Murase：For a long time, I didn’t really like the anime expression of the screen turning blue at night. I understand the argument that “animation is good because you can see things that are normally invisible,” but I thought that the expression of “imagining things because you can’t see them” was also good for film. So instead of saying, “You can’t see it! I wanted people to feel that. That’s what I wanted people to feel. However, we did not have enough time in the schedule for compositing this time, and to be honest, there were some parts that we could not tune as to whether they were visible or invisible. There are still some parts that I wanted to show but didn’t, and some parts that are a little too visible, and I think these will be the issues for the second part and beyond.

――Director: Shukoh Murase, you’ve been doing compositing (shooting) on your own since before “Mobile Suit Gundam Hathaway”. Compositing is very important in the final image creation, isn’t it?

Murase：At the animation production site, the backgrounds and cels (characters) are created at different sites (companies), and the process of making them into one screen is done. Even though we have meetings with each section to coordinate, there will inevitably be parts that don’t match. Each person in charge concentrates only on his or her own part of the project, so there is “something to show” there. When you fit each of them into one screen, you end up with a collection of “what you want to show” and “what you want to show”. Then, the balance of the screen is lost, and you can’t tell what you really want to show. In order to show what you want to show, you have to make choices, and there will be information that you have to eliminate. That’s what I’m trying to do with composites. That’s what I’ve been doing for more than ten years now. Of course, if I do too much of that, there will be conflicts with each section. This time, I’m doing it with the understanding that I’d like them to give me a break.

――You said earlier that the expression “imagining things because you can’t see them” is also good for film, but again, what do you think is the beauty of film?

Murase：I didn’t make a distinction between making animation for film and television. But every year I feel that TV is becoming a medium where people don’t look at the screen. I feel as if I am being overlooked even if I am telling a story with images, and every year I feel more and more that I need to make everything sound (dialogue) to be understood, or that people are only listening to the sound. But with film, people can concentrate on the images and read what they see. I felt that feeling when I made my last work, “Genocidal Organ”. This time, with “Mobile Suit Gundam Hathaway,” I feel like I’m telling a story through images as a film.

――After the success of the first part, the production of the second part, Mobile Suit Gundam Hathaway: Sun of Bright, has been announced. Finally, please tell us about your thoughts on this one.

Murase：For us as a production, we feel defeated about the first part. We feel strongly that we didn’t get to the point we originally wanted to reach. For the second part, we would like to reach that line at least. I would like to upgrade the images where I can, and I would also like to respond more deeply to digital technology. In the first part, we brought in digital techniques half-heartedly, and there was some confusion in the field.

Murase：Sunrise, the company that produced Mobile Suit Gundam Hathaway, has the advantage of having a strong analog background. I think this is a big challenge for us as a studio. I think the field of animation is currently in a major transition period, so I would like to exchange information with other studios while searching for a more efficient way of doing things in the future. I’m sure that the situation will continue to change even while we’re working on “Senko no Hathaway,” so I’d like to think about that in the future as well.