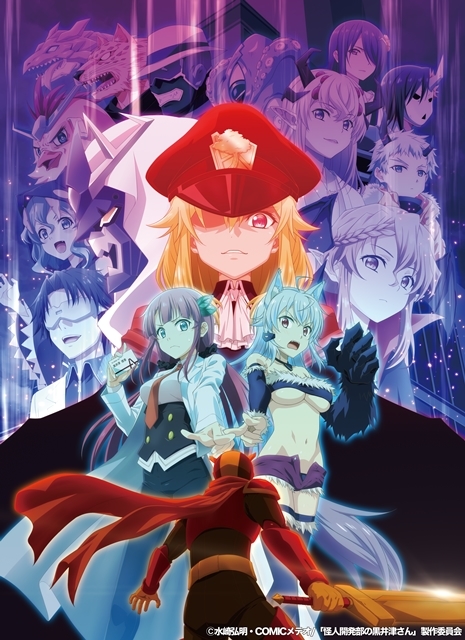 The manga “Miss KUROITSU from the Monster Development Department” written by Hiroaki Mizusaki is currently being serialized on the webcomic “COMIC METEO.” The T.V. anime of the same work will start airing on January 8!

This is the story of TOUKA KUROITSU, the protagonist who works hard at a particular job called “Monster Development” in an evil secret society but is pushed around by bosses with too many strong personalities.

In addition, the main visual, teaser P.V., and O.P. & E.D. information have also been announced.

Kazuya Morimae, the character designer, newly draws the key visual! The main characters, Kuroitsu and Wolf, face off against their nemesis, Blader, the God of Swords! Behind them are the executives of the secret society Agastya and a large group of people from the development department!

Is the impatience you see in Kuroitsu and Wolf’s expressions due to their eagerness to face the heroes they need to defeat or is it due to the pressure from the executives ……!

The teaser P.V. using the instrumental of the O.P. theme song “Special Force” by AXXX1S has been released!

■Broadcast Information
ABC TV, T.V. Asahi affiliate, 24 stations nationwide (“ANiMAZiNG!!!”) frame)
(In the frame of “ANiMAZiNG!!!”) Every Saturday from January 8, 2022 (Saturday) at 2:00 am!
Please note that the broadcast date and time are subject to change.

(Pre-release)
From January 8, every Saturday from 26:30
d-anime store, Hikari TV

A hira researcher who belongs to the evil secret society Agastya. （She is dedicated to her work and has no interest in improving her girl power. She has been trying to develop a monster with ideas not bound by existing concepts, but she has yet to defeat her nemesis, Blader, the God of Swords.

A sad werewolf monster was initially developed as a werewolf but was turned into a beautiful girl by the group leader. His mentality is that of a junior high schoolboy. He is assigned to the development department and is at the mercy of reckless behavior. He becomes conscious of Kuroitsu, whom he often works with, as a member of the opposite sex. Kuroitsu, who he often works with.

His real name is Hajime Satamaki. He is in charge of the development of Agastya, and always wears a lab coat and A.R. goggles. He is not very attached to anything other than his research and is a fantastic person but sometimes gets overwhelmed by deadlines. When he takes off his goggles, his true face is surprisingly duplicitous.

The leader of the evil secret society Agastya. She may look and act like a young girl, but her abilities are the strongest in the organization. She tends to work on the spur of the moment, and one word from her can suddenly change the direction of the organization and the concept of the monsters, often shaking Kuroizu and the others around.

The chief strategist and brains of Agastya. He has a lot of charisma and is the de facto decision-maker for the organization. Due to his position, he sometimes disagrees with Kuroizu on the development of monsters, but he is very considerate of his subordinates. In a sense, he is the ideal boss for an evil organization.

A righteous transforming hero. His true identity is Kenji Satamaki, a young man who works part-time at a bento shop. His personality is honest and sincere, and he is a promising young man with a burning desire for justice, but because of his earnestness, he is entirely immune to women. He is the younger brother of Dr. Agastya Satamaki.

|Comments from the cast have arrived!

I’ve been asked to play the role of Touka Kuroitsu! It’s an evil organization, but I’m energized every day by everyone’s daily struggles.
I’m honored to be involved in such excellent work! I’ll do my best to keep up with Ms. Kuroizu’s efforts!

I am Satomi Amano, and I will be playing the role of Wolf Bate in Miss KUROITSU from the Monster Development Department.
I’ve been captivated by the world of the secret society Agastya since I first read the story, which depicts a new kind of evil organization that develops monsters as a job. I’m pleased to be involved in such fantastic work!

I hope I can bring out a lot of that. I hope that everyone will enjoy the fun of the original story and the unique pleasure of the anime to the fullest!
And please support Kuroizu and her friends as they move!

All things have their creators, like Mr. Kuroitsu and his friends, and are made possible by the efforts of those who are not visible to the public. This work is a story of such creators.
The subject matter is special effects and heroes, but I think it’s work you can enjoy as a company employee.

It is a work that can be enjoyed easily, and I hope many people will watch it.

I’m M. A. O., and I’ll be playing the role of Akashic.
Akashic is the leader of the secret society Agastya, but she looks like an adorable girl, which is an attractive gap!
As the organization’s head, she acts with dignity, but I will do my best to express her innocence and cuteness!

I never thought we would be able to work together in an anime! I’m always excited to see people I never thought I’d be able to meet in anime.
This is a masterpiece that is sure to cause a tremor in tokusatsu fans but will also be enjoyed by anime fans. Don’t miss every episode!

So, a hero in a film starring an evil organization means you’re a villain!

All right, let’s kick his ass! But in reality, it is heartwarming work close to the hearts of working people, and reading the original story gave me a gentle feeling.

It’s beautiful work that will energize everyone for tomorrow! Please look forward to it!

The opening theme song will be ‘Special Force’ by ‘AXXXX1S’!

I’m very honored to be asked to sing the theme song of such an excellent anime, the first anime tie-up for the group. It feels like a dream even now. Thank you very much.

It’s a perfect song that will give courage and hope to everyone who works hard every day, so please enjoy the anime while listening to “Special Forces”!
AXXX1S Yuki Okada

A 9-member men’s idol group was formed in June 2018. Their first single, “KIMIHORI” was released in April 2020, ranked No.1 in Oricon Daily and No.4 in Weekly, and their first work released with full of expectation recorded sound results.
In June 2021, they released their 2nd single, “SUPERHERO.” It reached No. 1 daily and No. 3 weekly.

They are currently performing at live houses, mainly in Tokyo. The member’s YouTube channel “Ore ni Yasashii” has more than 19,000 subscribers!

They are a boy idol group with the concept of “royal road + α,” which incorporates trends and individuality with the idol genre as its axis. The group’s name, AXXXX1S, means “axis,” and they aim to be a group that can be the axis of their fans’ lives, cheering them up and supporting them even when they have bad days.

We have received a comment from one of our members, Ai Shinjo!

I’m Ai Shinjo from Maybee ME. I’m pleased to announce that Maybee ME will be the show’s ending theme song!

When I heard that the ending theme song had been chosen, I couldn’t believe it was such a big deal, but now that we’ve recorded the theme song and can announce it to everyone, I’m excited.

The ending theme song, “Ambiguous Aidentity,” has a tone that has never been heard before in MEIBEE ME, and it’s an upbeat and cheerful song that will push you forward!

I’ll do my best to make Maybee ME take a leap forward along with the “Miss KUROITSU from the Monster Development Department” anime and make this work even more exciting! Please look forward to the first broadcast on January 8!

A young woman produces the group, and with the theme of “cute idols that girls adore,” they feature pop songs typical of idols and heavy lyrics that draw sympathy from the same sex.

Their first single, “Ramirami LOVE ME BABY,” released in March 2021, reached No. 1 in the Oricon Daily Ranking and 9 in the Weekly Ranking! The music video has been viewed more than 300,000 times.

|The original author, Hiroaki Mizusaki, has commented on the decision to make a co-animation and sent us a congratulatory illustration!

I couldn’t believe it, so I kept asking the editor, “Is it true? But it’s true.

Thanks to all the readers who supported us and the various passions of the anime staff, we can see Kuroitsu-san and Wolf-kun moving and talking! It’s like a dream!

Thank you so much!

|Hero actors will be narrating each episode! Local heroes from all over Japan will appear in the anime!

The narration for each episode will be done by gorgeous hero actors that you may know! The narrator will be announced along with the synopsis of each episode in the future!

Miss KUROITSU from the Monster Development Department” (written by Hiroaki Mizusaki) is currently being serialized in the webcomic “COMIC METEO”!

The first three volumes of the book are now on sale in bookstores and e-books nationwide! (Published by Meteor COMICS / Flex Comics)